Strong style, strong content. The revival of song, dance, campfire stories, kids gambolling under the stars. Inner strength and outer darkness. What is ambiance? Anything not organized, that has a power and grace. A thousand-fold hooves pounding the long-grass; steers in the heat and red dust of the trail.

The alternate future has no organization as we know it; it has the urge to settle, the desire to range. The strong psychological content gives it vision and a type of Apollonian order. There is a truth to this order because it does not deny lust, or Dionysus. The grapes, the harvest, the cycle of life and ultimate regeneration. Savagery is a word for this society, which is where the relation to Howard comes in. In an episode of Survivors (series 2 “Greater Love”), Charles wonders if civilization had become “a vast support-system to ease the pain of living?” Savages societies have strong style, they are simpler but also can be more Hawthornean in their roughness.

Hawthorne’s Puritan communes live on the edge of wildness and have a lustiness that belies their seeming strictness (see Indian Summer by Manara/Pratt). I think it’s this basic mix, that you could call hypocrisy, that gives the communities such strength and order. In the graphic novel there are contacts with Iroquois Indians; because our societies have become so organized, any rebellion entails an alliance to form a strong psychological bond rooted in American history, native and settler.

A Hawthornean settlement is rough-hewn and bound to a strict moral code; in other words, desires and lust are a component in the psychology. This ties them to the harvest, the grape, regeneration, the wilderness of the mountain forest. The seeming hypocrisy is in one sense a recognition of lusts and carnality that form a basis of the society. Now, if you compare this to an image from Weird Tales, I think you might see what I mean. 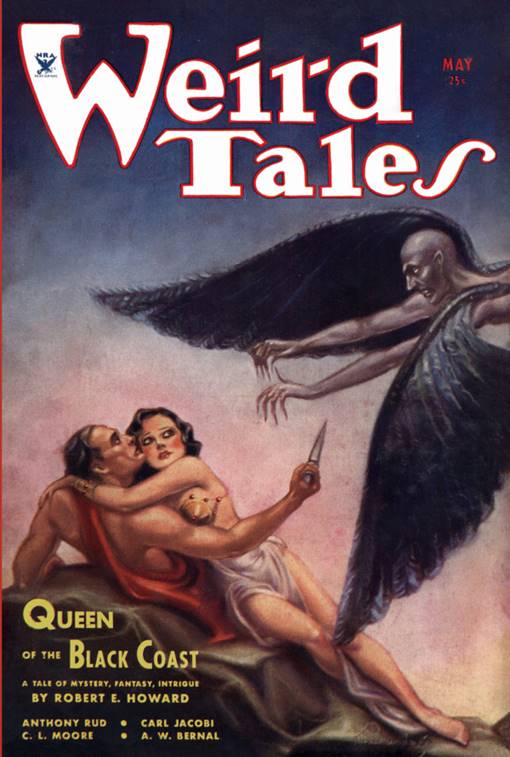 Brundage’s seeming titillation is a recognition of social lusts; lusts that form a basis of the society. “We” find that hard to follow because our societies are so organized. The idea of societies that are ruled by lusts strikes us as downright savage but, actually, it’s historically accurate. It’s the whole point of Jane Austen; romantic poet Lord Byron was a fan, and you can see why.

What I’m getting at is that our societies are now so organized that we have to become savage in order to appreciate that the desire to form a settlement, the urge to be free, these supply a vision of a type of order. These societies have a strong psychology and so a stylishness a la Brundage.

Since it’s a revival, one should look for connections between native Americans and settlers; I mean the meta-imagery found in Yellowstone and other National parks – savage wilderness. It does seem to me there is a tradition of American writing and poetry that Howard forms part of that dwells on savagery. Fenimore Cooper, wilderness poet Walt Whitman, the sombre homespun philosophy of Ralph Waldo Emerson, not to mention Jack London.

Howard takes savagery to a new level but, as I’ve said before, alongside that is the vast Dionysian wilderness, fronds unfurling, streams gurgling down everlasting forests of mountain green into verdant valleys. 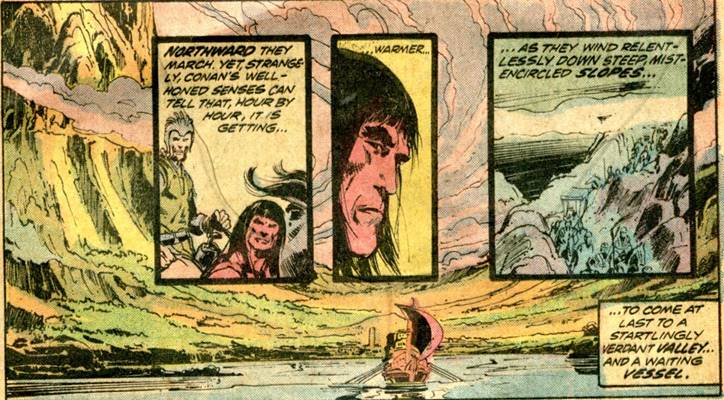 In other words, there is an American tradition that asks the unasked question (of today), has civilization become “a vast support-system to ease the pain of living?” Howard’s tales, alongside the bull-neck and mighty haired chest of the savage hero, evoke a lost world of Arcadia. Along with the lusts of the mighty barbarian are the images of Arcadia; geese on the wing, marshlands, long grass and longhorn.

There is a sombreness to Howard but, in this American tradition of fatalism , he places Man and his lusts in the wider circle of nature. This is very Hawthornean; the pioneer settlements were lusty by nature and had a savagery that was held in check by their Puritan faith. This is a very basic point because it depends on an awareness of the cycle of life and ultimate regeneration. The philosophy is at once sombre, as with Emerson, and lusty (as with Indian Summer). 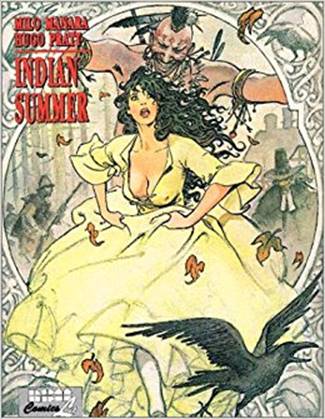 These societies are held in check by a vision of order; it could be Puritanism and its much vaunted hypocrisy. They’re not organized in a modern sense; this is the whole history of the west. Savage lusts are the basis of society; Howard just takes it further. It’s a mythical idea, but alongside it is Apollonian vision, destiny.

You could say the rough timber and solid style of a Puritan settlement is very true to this idea. In a revivalist situation, the connection with the meta-culture – the landscape – has to be re-established, and this entails contact with native Americans in their original homelands, more or less the National Park regions, especially Yellowstone.

The Apollonian vision is not modern because it is grounded on lust. It’s basically the romance of man, woman, the beast of the field, the homestead (the pioneer). 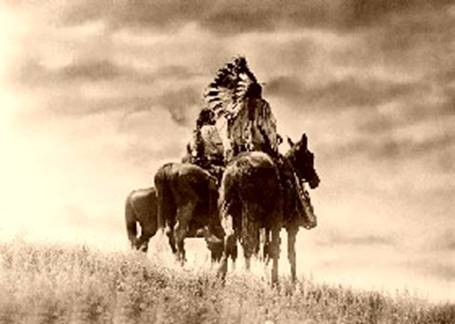 A vision tames the wilderness and adds some sense of domestic order, hearth, it doesn’t deny it. There is a logic of desire that establishes an order in the commune. The rational logicians are the complete opposite to this, and they have no seeming awareness of the cycle their own life will take (see Ayn Rand Wild Horses Outtake ). It really starts and ends with Rand’s The Fountainhead; this is the achievement of order for its own sake, as practiced by le Corbusier. But this always denies the eco-cultural aspect of living, the gay abandon, the seediness, the dilapidated wharves and meat-packing districts of New York in its heyday.

The logic of desire is actually the opposite of a Randian logician, as it is a true Apollonian vision of the psyche. It’s not intended to be a rational order, but it is a destiny, an aspiration. This is the traditional image of America. Revivalism is merely seeking to bring back to the forefront what is probably already in the psyche. “Clever” political advisors such as Bannon can’t possibly appreciate this as they are the heirs of rational logicians.

The Greek ideal was the farmer/statesman, the man equally at home with pigs as with heads of state. America has an eco-culture as I’ve tried to illustrate (CH 8); revivalism would try to establish a firmer basis for this both for pioneer-style settlements and native American hunting grounds.