Echoes through time, of timeless grace recalling Grace Slick’s Hyperdrive (CH 5). What I think it illustrates is that there are two different worlds. One is the world of action that is not pre-thought out and is free as the birds. These types of themes can come into Westerns, such as The Misfits (Metamorphosis ) which has quite a desolate end-of-era feel about it.

It’s the world of expressionist myth that connects Man to beast and motifs of nature. Why should they resemble eachother, whether it’s BWS’s Conan, Bruce Lee’s ethos, a dancing cowboy or Titian’s Diana the huntress? Because they belong to the same world, one of elemental physical grace that connects us to myth.

Of course, Howard belongs to that world. So too does Byron, the Dionysian youth the stuff of folklore..


And now Childe Harold was sore sick at heart,

And from his fellow bacchanals would flee;

'Tis said, at times the sullen tear would start,

But pride congealed the drop within his e'e:

Apart he stalked in joyless reverie,

And from his native land resolved to go,

And visit scorching climes beyond the sea;

With pleasure drugged, he almost longed for woe,

And e'en for change of scene would seek the shades below. Childe Harold Canto 1, 6

The Byronic mind and romantic legend captivated Europe and certain types like Nietzsche were undoubtedly under a strong influence. The attempt to recapture lost glories through ruin and time-lost peaks is what permeates Childe Harold.

(Oh that such hills upheld a free-born race!)

Whereon to gaze the eye with joyaunce fills,

Childe Harold wends through many a pleasant place.

Though sluggards deem it but a foolish chase,

And marvel men should quit their easy chair,

The toilsome way, and long, long league to trace.

Oh, there is sweetness in the mountain air

And life, that bloated Ease can never hope to share.  Canto 1, 30

Thoughts are refreshed and nature itself inculcates the romantic mind. Thus, the very notion of mind as distinct from urges and desires is anathema, and this is the world reflected in Greek myth.

If there are echoes in Howard of Greek myth it’s in the fantastic cynicism toward civilized ideals of law and order.

"Well, last night in a tavern, a captain in the king's guard offered violence to the sweetheart of a young soldier, who naturally ran him through. But it seems there is some cursed law against killing guardsmen, and the boy and his girl fled away. It was bruited about that I was seen with them, and so today I was haled into court, and a judge asked me where the lad had gone. I replied that since he was a friend of mine, I could not betray him. Then the court waxed wrath, and the judge talked a great deal about my duty to the state, and society, and other things I did not understand, and bade me tell where my friend had flown. By this time I was becoming wrathful myself, for I had explained my position.

"But I choked my ire and held my peace, and the judge squalled that I had shown contempt for the court, and that I should be hurled into a dungeon to rot until I betrayed my friend. So then, seeing they were all mad, I drew my sword and cleft the judge's skull; then I cut my way out of the court, and seeing the high constable's stallion tied near by, I rode for the wharfs, where I thought to find a ship bound for foreign parts."  Queen of the Black Coast

There is very little to do with Man’s laws in Greek myth and a lot to do with gods, goddesses, kings and queens who indulge their whims at the expense of trifling impediments. Take the case of Iphigenia who was required to be sacrificed by Diana before the Greek fleet could sail for Troy. Agamemnon warns his wife Clytemnestra to stay away with their daughter, but the message is intercepted by Meneleus who dragoons Agamemnon to obey.  Agers begs Achilles to intercede, but meanwhile Iphigenia resolutely seeks out the seer Calchus and lays her head on the chopping block (in a scene similar to Mozart’s Idomeneo). Suddenly Diana is seized with remorse and a dove appears in place of Iphigenia, who is taken to Taurus as priestess to Diana.

A lot of myths are double-edged, so you have the ruthless whims and the selfless act. It’s the world of action and the gods and goddesses of lonely glades, and this is the lost world that Childe Harold seeks to evoke.

In the line And e'en for change of scene would seek the shades below (Stanza 6), there is a sense that he is invoking the underworld, the domain of Pluto. In myth, Pluto captured the nymph Proserpina for his wife, but she persuaded him to let her spend six months of each year with her mother, Ceres (spring). Hence, the nymph is hidden for six months then buds into magnificence.

The idea that you should actively seek out gloom and solitude is anathema to modernity but not to REH, so there is that in common with romantic poets. Byron’s prosody seeks to recapture a world that is strangely melancholic but enraptured by the physical state of being (as I see it). Everything seems to be double-edged, and that is the very soul of romance.

Poetry is certainly very good at this if you think of Walt Whitman – “I contain multitudes” – whereas the rational world of law and order isn’t. If there are two alternate worlds, then Howard’s is at one with the ancient one. And it’s a much simpler one because we appear to exist in a labyrinth of facts.

Outside these claustrophobic walls is the real world that is indescribable except as poetry-in-motion. It’s simpler even if it could be described as gloomy, taciturn, inarticulate. The lofty peaks, the silent streams and twilit ruins. It’s worth noting the simplicity of Byron’s heroic prosody, which is a stanza of 8 lines of 10 syllables, followed by 1 of 12 syllables (iambic pentameter). No variations, as in Spenserean tradition (Faerie Queen).

It’s completely songlike, so the world it evokes chimes with song and rhyme. It has a melancholy air but also a sweet guilelessness. The same sense of melancholy you can easily sense in older poets like Marvell.

It’s the world of regeneration and revival and is completely outside a logical order of genomes/algorithms, of “fat and round” electric-green futures.

The songlike nature of Faerie Queene, for example, lends itself to magnificent eloquence in the field of nature’s gilded charms, the faire maiden..

So pure an innocent, as that same lambe,

She was in life and every vertuous lore,

And by descent from Royall lynage came

Of ancient Kings and Queenes, that had of yore

And all the world in their subjection held;

Whom to avenge, she had this Knight from far compeld. Canto 1, 5

and the faire flower..


Enforst to seeke some covert nigh at hand,

A shadie grove not far away they spide,

That promist ayde the tempest to withstand:

Did spred so broad, that heavens light did hide,

Not perceable with power of any starre:

And all within were pathes and alleies wide,

Faire harbour that them seemes; so in they entred arre. Canto 1, 7

Verses of knight, maid and monster in an enchanted forest lend themselves to an allegory of moral worth in a Christian/Classical; tradition. Goodness and sin there are, as in the dragonspawn in labyrinthine alleyways hid..


As when old father Nilus gins to swell

With timely pride above the Aegyptian vale,

And overflow each plaine and lowly dale:

But when his later spring gins to avale,

Huge heapes of mudd he leaves, wherein there breed

And partly female of his fruitfull seed;

Such ugly monstrous shapes elsewhere may no man reed. Canto 1, 21

A dragon is the antithesis of a logical order yet it is sometimes true that a thing contains its opposite, so that a world that seems to be rational is teaming with psychotic urges. Basically, this is what I mean by a hidden psychosis, an apparition of the unconscious. The songlike nature of the Faerie Queene describes the indescribable, which is just the poetry-in-motion of gentle wood and silent stream (Cimmeria).

That description renders visible its opposite, the dragon of misrule or awful apparition. Unless you can describe something it doesn’t necessarily exist or, at least, have any worth, and narrative poetry in the Spenserean tradition is very good at description.

I’ve previously made this point about Howard, that he invokes nature’s gentle buds and uses them as a counter to brute vigor. Descriptions which are songlike are able to invoke opposites; like Spenser they have a moral worth. A logical order therefore has a psychosis at its heart because it cannot conceive of opposite; the apparitions that rise are inward-turning, blind to the charms of the anemone (flower sacred to the blood of Adonis).

The others side of nature is her bloodiness. I’ve always been partial to bullfights, being exposed to their hallowed charms at childhood in Spain. These images of zombie-like protestors at Pamplona leave me unmoved 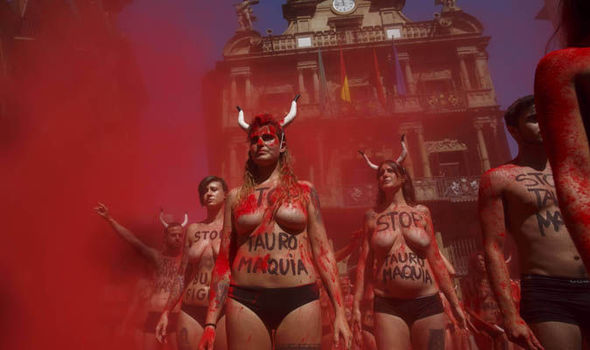 Give me Jeffrey Jones any day 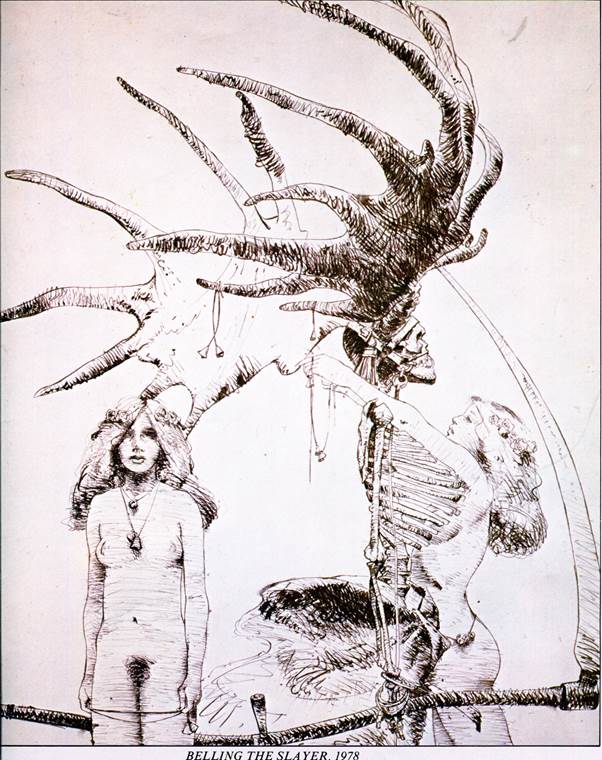