Are "facts" not facts and is logic illogical? All this springs from Ada Lovelace, being both the first programmer, as well as a child of romance.

For a start, Byron's short poems such as So We'll Go No More A-Roving, and She Walks In Beauty, have logical sequences.

"She walks in beauty like the night
In cloudless climes and starry skies;
And all that's best if dark and bright
Meet in her aspect and her eyes
Thus mellowed to the tender light
Which heaven to gaudy day denies."

The poem's setting is the cosmic rhythm of day and night, sun and moon, Earthspin. With rhythm there is scope for rhyme if meaning and presence.

Day following night is ever-present and practically kin to Heidegger's being. So Byron is also writing about presence, the sense of being if this individual.

So, being and presence are closely tied to the sense of cosmic rhythm. Thus goes right back to Aristotle's unities of action, time, place on the stage.

He advises a single revolution of the sun for the action to take place. Corneille, a 17th century tragedian, adapted this slightly, but was keenly aware of the "unities".

So how does this all relate to " facts" not being facts (or fiction )? For the reason that a logical system (of the sun) is not bound by the Aristotelian unities of a single day's action in a single setting.

Even if this framework is rather harsh, to have no framework makes a logical system appear illogical!

Rhythmically and sensually it makes little sense. But this is the modern world where the transmission if verbal data maintains the established order.

As mentioned previously, this order is the competitive order, which has been "switched" from the physical world (of action) to the logical one (of the head, of algorithms).

The "effect" of data on the head (ego) will gradually become one with the expressive algorithm (see passim), and the stories "they" write that lack the fertile cycle of day and night, man and woman, beast and hunter.

Stories with meaning and presence have a metaphysical reality if action, time and place. The rhythm if the Earth or Earthspin.

The basic point is that, for all the complexity of modernity, it could still be a grand illusion that lacks the rhythm of the night, of beauty and the beast.

The illusion is a reflection (repetition or light) and so intrinsically complex. This attractd the ego and the Black Sun of calculation in s perspective reality (see x-ray diffraction and DNA).

An illusion always is convincing since a reflection is convincing. The simple truth is that, as the Earth spins it replaces complexity with rhythm.

Byron is writing about this pre-modern world of day and night and beauty. Beauty is balance and proportion, line and movement (cartooning).

Myths are interpretations which are tied to natural rhythms of life, death; day, night; beast, hunter. 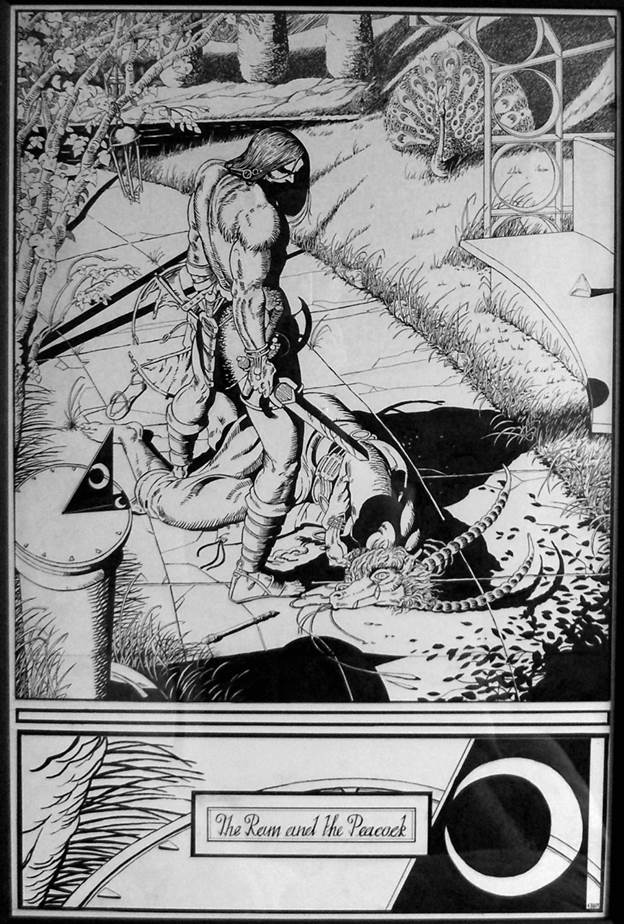 figurative art is tied to the power and meaning of expressive rhythm. Byron isn't just a head, even though it is a fairly magnificent one. Women were attracted to the head, but also to the indolent figure, swaggering louchly across nighted ballrooms.

Byron's logical inclinations in his writings are aimed at explicating the temperament of a romantic revolutionary.

The presence of poetry and romance in the world was not something that Ada Lovelace abandoned. In fact, her prescience on her notes to the analytical engine was precisely because of this.

In the fairly famous "note A", she writes,

" (Future engines) will act on any object whose mutual fundamental relations could be expressed by those of the abstract science of operations, and which should be also susceptible of adaptations to the action of the operating notation and mechanics of the engine."

She expressly mentions music as a future application. While Babbage and his Italian partner Menabrea were contemplation routine card-indexing, Lovelace was thinking ahead to the expressive algorithm.

The problem is, the expressive algorithm occupies not the physical world of romantic night, but the illusory parallel reality of straight-lines (sun, Galileo).

The stories "they" tell and the music they play will just add to the illusion of the head, aka the Black Sun of sterility or physical boredom.