For those who say how can a hero of the western mind be made a negative force..this..

If you’re gonna rebel you’ve gotta make the top figurehead an enemy of the new order, even if they are held to be God’s grace to mankind. Henry VIII, when he broke with Rome in the 16th century, by the same token created the word “popery”, meaning all things held to be Pope-like and basically bad – as opposed to good. So, a complete turnaround of the order was effected.

It’s nothing new; it’s as old as sin. There is a relativity to morality since we are not gods, we are fallible mortals. In the new order, Einstein suddenly becomes fallible and is found to have feet of clay – what’s new?

Man, historically, may be hubristic, but he is not wrapped-up in his mind to the extent of having no empirical truth. If you recall from Francis Bacon’s “Four Idols” (Tales of Faith 10) logical thought is not empirical, since it’s purely theoretical, and this was a danger Bacon foresaw in the Idol of the Den. Hubris is not madness, and being locked in your own head could be thought of as mildly mad or, at least, highly delusional if not pathological.

You no doubt gather I’m a fan of BWS and, through emails with Roy Thomas, know they are quite different characters. In comicbook writing that’s not necessarily bad, since each adds idiosyncratic touches (Roy pretty much agreed).

However, when he said words to the effect that comics are about sales, and BWS as a person was delusional on this score, I felt it to be beside the point. BWS the artist is not concerned with sales, and as a person is dismissive to the point of rashness (the “inbreds” of Young Gods and Friends).

It’s not a delusion; it’s a personality trait of an artist obsessed with aesthetic value. He is not stuck in his own head as a madman is (vis our dear leaders), he is looking at the proportions and expressive traits of human bodies – including heads. There are roughly 8 heads to a body (ideal), empirical knowledge learnt at art college (Weird 15.)

Our world is dominated by the head out of all sense of proportion and sense. It is not empirical truth, it dates from Francis Bacon and what is called “empirical reason” or thought with verifiable facts (Tales of Faith 4.) Yes, but dating from Faraday’s discovery of the solenoid or electric coil, we enter a parallel system or mirror-image reality – to which facts are attached. This has its “greatest” exponent in Relativity – do you see where this is heading?

The parallel system becomes ever-more persuasive and there are ever-more delusional heads attached to it (as at CERN). Everything is totally convincing, except for the fact there is no beauty or proportion.

As in the ancient world (of fantasy) that is dreamlike and that attaches Man to the cerebellum or hind-brain. Anything proportionate is related to time and space – and the magic of time and space. Proportion is something that happens in time, and so is quite musical. Western civilization is quite indebted to to this concept which, of course, goes right back to Homer. The troubadours’ cadences of epic lyrics across the ages. Man feels weakness in the face of beauty, and a berserker strength to retrieve its charms.

Man is a flexible animal; the brain is just a well-protected sponge. Having said that, a Brythunian blade is messy but infallible, as well as easy to clean if well-oiled. So, we’re back in Hyboria: from the modern dance of death to the ancient body-scented dance of life and death, sung on a sword. 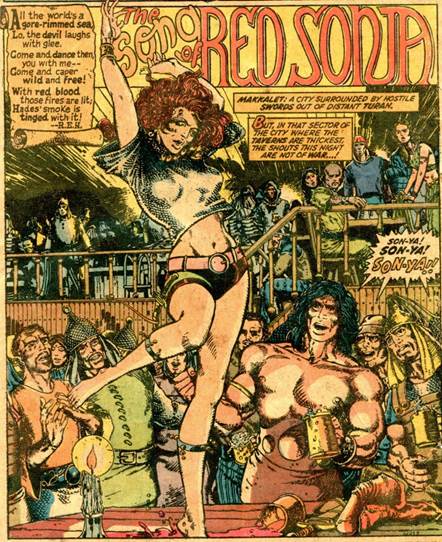