“They” are quick to have a breach locked-down lest the ego is questioned by the “childlike id”. What could happen is..

Italian Alessandro Strumia made “highly offensive” comments that “physics was invented and built by men” (DT). The piece gives a strong indication of ego unleashed at CERN – or what I tend to call the “maze of the ego” where fact equals fiction and there is no “ambiguous symmetry” (Hyborian Bridge 17)

What I really mean is that we are living in the ego of the “supreme sorcerer”, where facts are judged by their dislocation from physical reality – our proportionate bodies. This then becomes ultra-realism (Pictorial 25) the domain of the ego of verifiable fact, where the supreme sorcerer cannot be gainsaid lest the entire edifice comes crashing down.

If that happened, there could be a complete turnaround of right/wrong, good/evil and we end up back in the Middle Ages 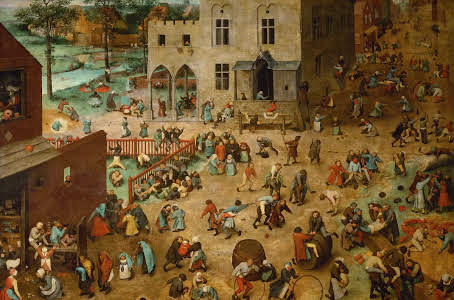 Bruegel the Elder’s Children’s Games (1556) comes right at the end of medievalism, giving a taste of those bygone days. At top left, “a child dangles an eyeless adult’s mask in a sinister touch” and the child is “the id” (Sooke, DT)The id is the primal rhythm, represented by the swaying serpent of the unconscious, connecting pleasure and reason (Pictorial 1).

In one sense Bruegel comes at the end of the supernatural Middle Ages to a more scientific and modern reality. In the other, he is still in the world of the id, and the “new sorcery” of science has yet to take hold. Bruegel’s minutae are an exercise in ambiguous rhythms and symmetries that resemble a controlled chaos, with no underlying order or plan. You follow lines almost like constellations on high, to give patterns of meaning on the village square.

We can go from our society of the ego to that one of the id if the supreme sorcerer is toppled from their lofty perch. That’s why the guys at CERN are so conCERNed; we could then switch to a society of the primal id – childlike and  unconcerned – much more like music and playing and gay town carnivals and horsing around in the paddocks, rough and tumble, dirty and carefree.

It’s obvious that, to “them”, the ego is the only genuine reality because that is the material world. That lie exists until we die, by which time it’s too late. So, for a start, the cycle of lifedeath should be re-established; the spirit world of ghosts that represents reality to tribal peoples. This is also a classical reality of deities of the underworld and overworld and legendary heroes and heroines.

Very similar heroes – or even the same ones – appear in comicbooks, so comics are a good way to approach the topic, and this leads easily on to the medievalist Hyborian Age. Along the way various medieval diversions could be in order.

Comics, as I was saying earlier, represent a lifeforce in time and space. It’s worth printing some of Romita Jr’s pages from X-Men since his ticker-tape style of panels is reminiscent of classic comicstrips. 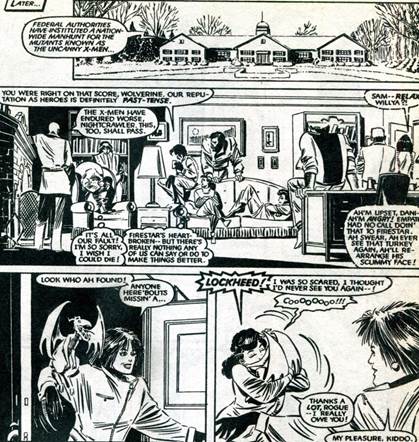 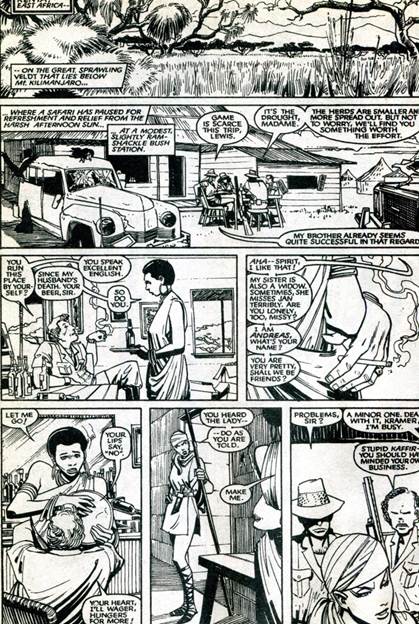 I grew quite addicted to this, perusing these old issues in b&w; it seems that – like music – the sharp drumbeats that punch the lyrical story home can easily have a hypnotic effect on the brain. The rhythms don’t need to be that complicated, so long as they are smoothly executed to enhance the action. We are often told the brain is a complex organ, yet it’s also simple, with a primal symmetry. Musically, modern rap is far too cerebral for my tastes, and the hammering sound of urban Surtur from this 80s track lets you know what’s happening, the slap of red lipstick does the rest

WALK ON WATER (B SIDE)

The primal is original and has an original perfection. I sometimes think that Africans would be better off keeping their jungle drums because they have such perfection! A drum is something that is addictive in time and space, sending the body into a trance of fluid movement and economy.

If you listen to “Policewoman”, the drumbeats have an organic feel, fairly repetitious with none of the blatant backbeats and dubs of contemporary rap. The quality is enhanced by orchestral touches – class, almost reminiscent of Marvin Gaye.

You see, the brain can easily be overextended – not just by facts but by cadences. To my mind that is what modern rap does. The percussive tendency, by contrast, is primal and hypnotic and – crucially – can get a message across (tell that to Kanye or “Mr Ego”).

This is what I find in Romita Jr’s work: it made reading easy and there was a primal force to the story. So, percussive beats are imperative to getting across a fairly complex narrative. Don’t forget you find this in classical music as well, not only Stravinsky. What “they” will never accept is that reality is simple – the ego simply cannot contemplate such a thing! Therefore, their “story” is forever half-fact, half-fiction and indescribably complicated.

We are symmetrical beings, balanced and proportionate. From that simplicity comes an awareness of just how complex life is. What comics tell you is that the percussive tendency drives forward an awareness of time and place. It’s not surprising if we are – at the level of the primal or cosmic serpent – rhythmic beings. This is the id, our appetites and desires which drive us. To deliver a world of meaning (epistemology), percussion is a good start, and basically a bodily counter to the absurdly dominant head – the maze of the ego in which we live. 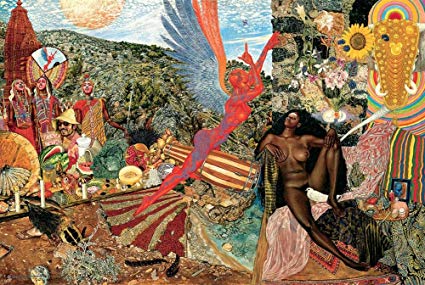 "We stood before it and began to freeze inside from the exertion. We questioned the painting, berated it, made love to it, prayed to it: We called it mother, called it whore and slut, called it our beloved, called it Abraxas..." (quote on 1970 Santana album cover from Damian Herman Hesse)

The less ego-infatuated societies needs must partake of the spirit. If you listen to Hildergard of Bingen from the 12th century, you might on first reflection reckon no possible connection to the percussive beats of the 80s ghetto

If there is a connection it would have to be that neither deny the sublime primitivism of our world. That it cannot be experienced by an ego that lives in its own self-invented world (of fact and fiction.)

Hildegard’s life as a priestess and polymath was above all physical. Though celebate, she was amongst the first to describe the female orgasm, and wrote several works on herbal remedies. Thus, “Reyan (tansy) is hot and a little damp and is good against all superfluous flowing humours and whoever suffers from catarrh and has a cough, let him eat tansy. It will bind humours so they do not overflow, and thus will lessen.”

Bodily cavities, ambiguous symmetries, mucus membranes that we experience in all their perfection of time and place, the same membranes that produce ethereal singing in her plainchant compositions.

Her visions and intense light effects were probably the result of migraine.. scotomata which follow perceptions of phosphenes in the visual field. Her spiritual writings therefore arise from physical experience in her brain, and her plainchant is given ethereal form by the throat in vibrant praise for saints and feast days and the Virgin Mary.

As it happens, this seems remarkably similar to the ancient Greek Sybils, who probably inhaled noxious vapours that produced hallucinations (she was known as the Sybil of the Rhine). Her herbalism is also rooted in Greek notions of the four elements and four humours, dryness, wetness, heat, cold.

As I believe I did mention previously, physics used to be known as Natural Philosophy, making it sound a lot more like ancient Greek knowledge that Hildegard was essentially following. For the sake of argument, then, how might Hildegard be compared to the supreme sorcerer of our age, Einstein? The biggest difference must be that Hildegard’s life was essentially spiritual,a nd she was sent to study under an anchoress at the age of eight.

Anchorites not only renounce worldly goods, but even receive their last rites before anchorage! (like barnacles?) This is almost like the ghostworld of tribal villages (“Adastra in Africa” Tales of Faith 2) A main plank of Hildegard’s philosophy was that Man is a microcosm to the macrocosm. Meaning that the body is a universe unto itself, relational to the universe.

All of this is completely contrary to our supreme sorcerer. In Einstein, the body is completely meaningless, there is no percussive foundation to experience, and the proportions of our throats are not meaningful (in song, feasting). There is no relation between mucus cavities and ethereal chants. Our spinal columns and primal instincts have no primeval heritage of significant strength, integrity, acrobatic movement.

The reason is that modern physics is out of physical reality; it can’t relate to our bodies, but it can relate to the ego of verifiable facts. Because the ego has no physical substance, no sense of proportion and rhythm (let alone harmony of sound), it enters a maze or parallel system where fact becomes fiction.

That is, where there is no sense of proportionate reality, of head to body (8 per figure, ideally). Essentially, we live in the ego of the supreme sorcerer, where facts are taken out of the physical reality of proportion, and into a geometrical universe (of mirror-images, dating from Faraday, see passim).

I know this could seem repetitious, but pitting it against the 12th century Hildegard does say something for the state of society where the graceful neck that quaffs mead and gives rise to lyrical song – myth – and attaches head to body, is taken out of the equation (by that selfsame head). 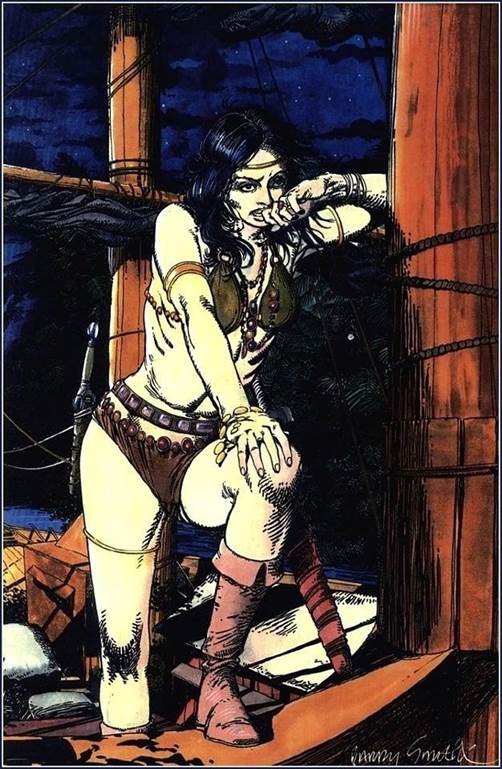 Belit deep in thought on a sea of dreams