You know how people take quotes out of context in order to ridicule the opponent? Somewhere in Hyborian Bridge 25 is the phrase “The head isn’t physical”, which could be sure to flummox some. Actually, reading a review of Dylan’s drawings of his songs by Mark Hudson – he of the fin de siècleParisian “sex industry” (sic) – I came across this buffoonery

At first, I’m not so much disappointed as utterly flummoxed. Could this be the “diplomat” with whom the subject of the song used to ride on her “chrome horse”, or is that actually Napoleon? 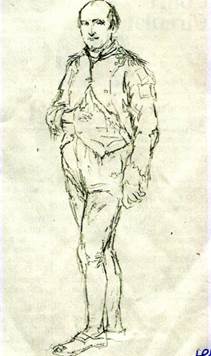 Like Dylan, I was being very literal, ie the head can’t exist on a physical plane without the body. The head is meant to be attached – like a semi-quaver always follows a quaver - a bust is a classical statement of this fact. An exception might be made for a religious icon, which is taken to be the essence of goodness of a heroic life.

A story – whether the Bible or Homer –is the content, psychic and physical. Faces and features are quite often more folk memories than anything else. In the New Testament, there is no physical description of Christ’s face, though he is generally held to have a straight beard, shoulder length locks.

Reality is actually the story, same as you find in comicbooks, a lifeforce of time and space. Without that, there is nothing psychic, nothing physical, and what you might be left with are streams of electric impulses of “sense data”. Hence the rather bold statement that a head is not physical, since we’re well on the way there!

Is this the big “nothingness” that was the cosmic theme of Korvac (Weird 8)? A variation on the theme was The Beyonder, a cosmic entity from outside our universe who seeks to attain “unity” by destroying everything. Well, “unity” you could say is the absence of time and space, as expressed in different life forms on planet Earth. No life, no death, but a type of existence one could liken to an electric stream of data.

The Beyonder may be fooled into thinking this would be a type of Nirvana – instead of simply nothingness, or pure ego. Claremont, in X-Men #203, gives a nice account of his encounter with a furious Rachel, who has touched myriad living lifeforms of the universe on the home-planet of the M’Kraan Crystal (where the Phoenix entity is berthed in the White Hot Room), but cannot bring herself to destroy the universe in order to recreate it. 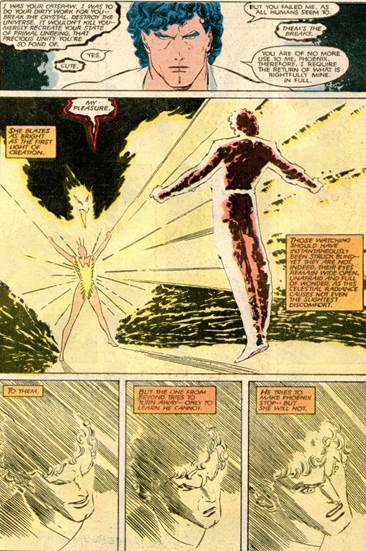 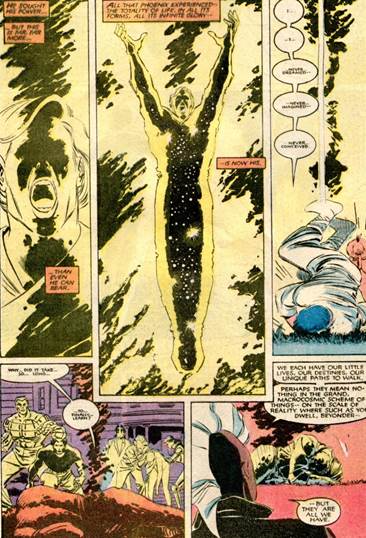 One might look at this as the relativity of ego – The Beyonder (or sorcerer) – versus the absolute of a microcosm. The Beyonder, for all his power, is an empty vessel and has no concept of death and rebirth and the myriad lifecycles that makeup creation.

Only a microcosm has meaning, knowing life without death isn’t knowledge, merely a type of nothingness (electrical impulses). Is this the knowledge of their own ego that our Martian overlords are giving us? What they assume is the universe is in actual fact their own logical processes, which are always relative.

I was doing some research on the M’Kraan Crystal online, and trying to make head or tails of the entire Phoenix/Jean Grey storyline. What struck me was that, insofar as the story was driven by strong psychic bonds – especially between Grey, Scott, Madelyne Pryor and their various offspring – it was very effective in pitting a cosmic entity against frail human emotions.  When Jean is killed by Magneto in New X-Men #150 (Morrison), she says to Scott, “All I do is die for you.” This is the same message Rachel Grey-Summers gives to The Beyonder; without death there can only be a shadow or mockery of life, a disembodied ego, a mad god.

Put another way, a logical process that is there to give us things and make us believe we are living when, in fact, we are only existing IN their logical processes (ego). “They” being the spawn of Relativity, who tell us what is in their head is absolute knowledge, when it is merely electrochemical impulses (disembodied brains from the planet Mars).

Why were the 80s X-Men such a phenomenon? It’s in the name; a group, a society of men and women, who loved and lost, who aspired to duty to defend human life and liberty against all odds. It could be hackneyed – and did become hackneyed – but, whatever it is, it is not a logical process. It is a lifeforce in time and space.

It is not relative, it is absolute. The M’Kraan Crystal is a nice myth but is nothing without Jean Grey; her birth, her life, her losses, her sacrifice. A story is nothing without the characters; so long as the two work together it has a meaning.

The M’Kraan Crsytal storyline is not about tying up loose ends; it’s about the closeness of characters’ rapport; the whys of what they do. The X-Men may be comicbook characters, but they are still absolutes in time and space. They cannot be told to become logical processes of someone else’s ego. This is what rebels are (it’s what the Jefferson family still is.)

WHEN I WAS A BOY I WATCHED THE WOLVES

From the time of his birth, Man is a rebel because he/she is not just a stream of electrical impulses, he/she is a naughty child playing at mischief in the fields/forests. The land of faerie; the perfect minutae of things playing and frolicking in the gloaming. Perfection occurs in the rhythms of time, the Garden of Man (Slick). Anything outside that is a persuasive lie – our dear leaders.

A convincing lie is an electrochemical impulse – the sun – which is what we are on the way to becoming. A logical process, not the perfection of action in time and place. Survival; athletic grace; throwing the discus; the city-state in history and Hyboria, and why the hero has a place there.

Taking a cue from Frank Zappa, perfection of grace is the other side of the coin to obscenity. The divine Cleopatra of the Nile was the subject of this scurrilous terracotta lamp 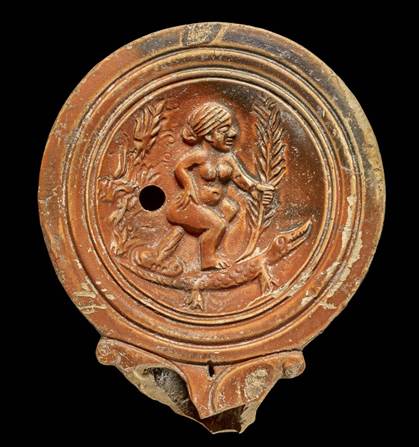 Harlan Ellison had a story I recall about a woman performing with donkeys, which goes back to Apuleius (Pictorial 21). Nature has a perfection of grace that is the counterpoint to scabrous wit (read Byron’s critiques: “Here are Johnny Keats’ piss-a-bed poetry, and three novels by God knows whom… No more Keats, I entreat: flay him alive; if some of you don’t I must skin him myself: there is no bearing the drivelling idiotism of the Mankin.”) This is why sheep-shagging is a pursuit; not that I’m recommending it, just as an observation).

It’s time to call the bluff of those who live in the relativity of electrochemical impulses. No one can know the truth of the absolute in the disproportionate head. It has to be experinced; it cannot be given by governments – or by The Beyonder (Rachel to The Beyonder X-Men #202).

You learn more from reading Conan the Barbarian than from any number of newspapers on governmental doings. Because the tales take place in the absolutes of time and place. In order to retake the world we have to go outside what is there – a logical process – to become free human beings; the city-state of monumental grandeur and dingy alleyways.