Of all the modern states, China must be the one to have most visibly fallen for the nostrum of construction, as opposed to bodies-in-motion of a populace exercising free-expression and strength of belief.

From that perspective, Discovery’s History of Rome (prev) has a lot to say. While Rome in the latter period attempted to exercise order, the growth of esoteric cults went in the opposite direction. Discovery makes out that there was confusion and a searching for meaning and that, in some way, the pursuit of order was empty. Even so, the pursuit of order was never a total dedication, and there was a degree of leniency to alternate ways of life, so long as they were brought under the province of Rome.

The Christians were unique in that they could not submit to Imperial theocratic rule, and so the battle was joined between, on the one hand order, on the other spiritual rebellion. Blood flowed. Rome was open to cults because, once a deity was evoked, it was assumed to be part of the pantheism of nature gods. Something in the human psyche desires or needs a measure of free-expression, an icon and a shrine. In the abstract sense, therefore, there may be no such thing as pure order, since that means no freedom.

Rome never attempted pure order, they divided and ruled; the order they did impose was overwhelmingly construction, their fabled engineering. Eventually, this material boon was not enough and spiritual rebellion took hold. From that lesson one should learn that material order doesn’t exist without spiritual freedom, and that any pursuit of order for its own sake is a false premise. For a start, Roman engineering was naturalistic (Hyborian Bridge 2), so the order imposed was not on nature but on people.

Modern times are pretty much the opposite; we impose order on nature and people are assumed free. A little thought should tell you how wrong that is; if we are part of nature then we are imposed on; if we are apart we are lost souls.

It’s obvious where this is going! If we are imposed on, then our natures are changed. This is what “they” want; in other words, the Amazon House (Bezos) or the enhanced mind (Musk). IE instead of imposing order on people like Rome, they are imposing order on nature and thereby on people.

“They” would assume this is foolproof, since there is no higher authority than nature, right? Yes, but this is where we get into physical substance and psyche (again). Physical substance is an ethereal entanglement of light and dark; we are one with the

Our psychic strength is entangled with the physical substance and “thingness” of places of power (Stonehenge, Mosaic Law Tales of Faith 10). Any conception of order is technically at a dead end, because it constantly approaches vanishing point. This never happened to Rome because their techniques were naturalistic, merging with the rugged rhythms of nature. Technique is a mirage born of the sun, somewhat like relativity, and the balance and proportion of naturalistic forms a necessary counterpoint.

From HB52, the Renaissance brought-in perspective techniques, which pre-Raphaelites like Burne-Jones tended to use very judiciously, so that the psychic tonality they were aiming for was not diluted by technique 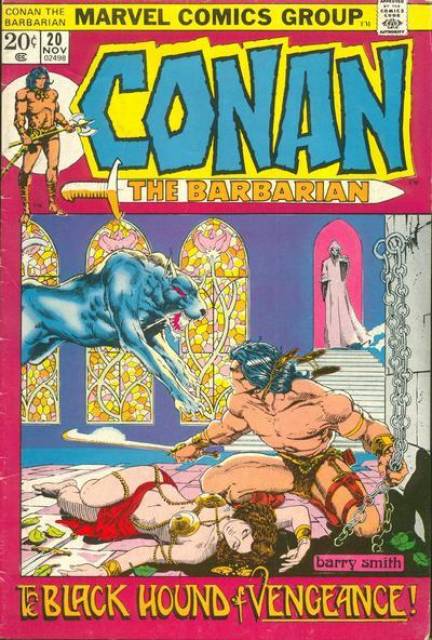 BWS’s cover, for example, has perspective tiles and stone wall, while the art-deco windows sort of hang suspended like the wizard. The leaves, cracks in the wall, gothic arches, are precise details all of-a-piece. The very opposite of impressionism, details match closely – naturalistic, decadent, gothic.

Along with Frank Thorne (Red Sonja) the superabundant naturalistic detail gives a fantastic feeling of physicality, and you could easily say that psychic tone (narrative content) is expressed through the physicality of style, the delicate proportions.

So, basically proportionality in all things is a hallmark, almost pantheistic. This makes the disproportionate man-serpent from Conan #7 a fitting image for the like of Bezos and Musk, who direct all their techniques at enhancing the prospects of the human head at the expense of reality, or physical substance.

The head is perspective POV, which is the reality we have inherited from the Renaissance. Except, it’s not reality, it’s only factual reality, not physical substance, not the proportionality of things, what they are in shape and physique - in a word, style.

The reality we inhabit does without content (psyche) and style because it is the one the heads of the acolytes use to regail us with facts (of perspective POV). The theories of sorcerers –Hyborian Bridge 52– are converted by acolytes from the real world of light and dark (where they are formulated) into a fictional world of perspective.

This applies to all acolytes, since they aren’t as clever as they think. They can only spout facts. To take an example; Darwin is survival of the fittest, but before survival there is primordial rhythm that fashions things in all their proportionality.

The confusion between the two means that nature is deemed to be factual, whereas it’s actually physical substance - the drama and power and grace of soaring eagles (or birds of the Galapagos Islands)

In a word, style is missing in the modern scene, the style that you see in the delicate proportions of pre-Raphaelite detail. The narrative and psychic content of the intermingling of hunter and prey is missing. Facts cannot replace style and content, but they give power to acolytes – of weakness.

What I’m getting to is style and content are the city-state and the commune in the ancient sense, whether Rome, Hyboria, medieval. Physical substance is the reality, ancient and medieval – and settlement – worlds (see “Indian Summer” Alternates 7). In a world of fact, cold-blooded technology preys on weakness

If people can wrap their heads round the sheer number of lonely individuals out there.. human beings will have to start adjusting their world view to accept this new form of.. intelligence.. Perfect looking images are nothing new in the world of art – look at the classic sculptures of Michelangelo that were idealised representations of people at the time. (Realbotix robot dolls)

Michelangelo was skilled at content – psychic narrative – and style – the primordial rhythm alluded to previously(Hyborian Bridge 36). Instead of these two aspects, there is simply the functionality of psychotic-AI

As for loneliness, yes I know it exists; we are children of the universe and it’s a God-awful lonely place if you watch the waves rolling on by under a bleak-grey beach-comber sky. If you take the America of old -the paintings of Hopper or the photos of Diane Arbus - there may be a type of existential loneliness there, but it doesn’t seem to follow that implies unhappiness. There’s always fortune. That reminds me of the old Jacques Tourneur classic Cat People. The fortune-teller prophecies doom and the film expressionistically plays it out. In that film you are seeing psychic content and expressionistic style. If that is a world that has some appeal you have got to also accept there is loneliness.

That is the physical substance that you see in the stylistic, dreamy ambiance of streets, shutters, parks, trees. If you want a world without physical substance then you are going to get psychotic AI; a world of the head and not of the body (cats or men, or horses, deer, buffalo, jackals).

It is the Amazon House, cold-bloodedly turning the head to the sun (cloud data) and away from life as fortune and fable. If something’s convincing it forms data – an object, an image - and this is the future of voice-activated utensils – a fan, a robot doll (spot the difference)..

“We take something simple, say like a fan. We can print the total code for that into a single sheet. You can see product companies prototyping in a matter of hours.” (AI wars)

..that you talk to as a loved one (Zappa STICK IT OUT from Joe’s Garage). When one bypasses the body one mounts another body, namely the sun-loving serpent of myth (there’s a scene in Frank Thorne’s Ghita of Alizarr where the wizard mounts the serpent-god). All this is psychotic AI, cold-blooded pseudo-genitalia attached directly to the head. The body is physical substance, not data, proportionate to its needs, desires.

This is the ancient world of action, commensurate to the turning of Earth on its axis. Man eats, sleeps, dreams, digests, rises from the fast, faces the sun again. It seems to have escaped the attention of boffins that, when the Earth turns, sun and moon are equivalent. It’s the naïve romance of a journey home under the stars above, with the dawn of a new day.

AND THE EARTH MOVES AGAIN

“Egyptian kings they sing of Gods and pyramids of stone

And shinin' as a beacon for those that need a road

And I go home to the sun” – having travelled through the moonlit night. Physical substance is day and night; the desires and needs of the body, the hunter, the warrior. The ancient – and medieval – world was of the body. The fighter, the farmer, the warrior-statesman. In our world, the head turns towards the sun (AI or electromagnetism or reflection), prey to the psychopathic serpent of cold logic, prey to the likes of Bezos and Musk.