We live in the house that Rand built in The Fountainhead. I have no proof of that and have never even read any of her 2,000 odd pages. All I know for sure is that as a world-builder she has few peers.

However, if the universe is a symbolic order that building of pure rational order can collapse overnight. What the building assumes is that there is no grounding, no primeval lustiness, essentially no dirt and also no sexual symbolism (of which more in Part 2). It is an artefact fit for robots but having no symbolic content, which is the dream of Man and the universe.

Dreams are built on lust, so they’re not clean, pristine things. This is what you find in Greek myth. In the story of Daphne of the laurel, there is an incestuous edge to Apollo’s pursuit of Daphne. The naiad, also called Artemis Daphnaia is related to the sungod (it’s complicated) and feels the taboo. Daphne loves, but she has to become vegetative, a symbol of regeneration and fertility.

THE CROWN OF ISIS

The edginess of relationships in the Greek pantheon is found time and again. It is repeated in the incestuousness of tragedies such as Euripides’s Elektra (with her brother Orestes as the foil for matricide). BWS has a famous print of Artemis and Apollo which captures this decadent romantic closeness in flamboyant fashion . 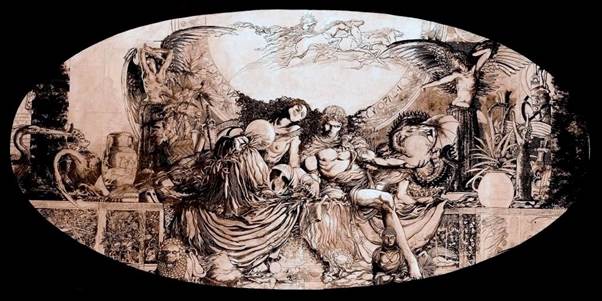 If you take world-building in comics, Kirby is the king of romance. In New Gods, #7 reveals that Orion is actually the son of Darkseid in a trade-off with Scott Free who, with the aid of Big Barda, scuttles off to Earth (as Mr Miracle) before Darkseid has a chance to break the pact. These worlds are built on very close, uncomfortably close relationships. 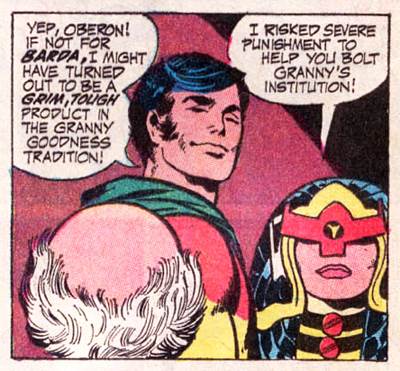 There is a type of symbolism in that; romantic, sexual symbolism. This symbolism is a primeval aspect of nature that is utterly missing in Rand’s world-building. The Fountainhead is not built on fertility; it’s a building without foundation or attached to any landscape.

I remember reading a piece by Rand that took apart Kant for espousing a Christian humility (“weak”), when of course Christianity espouses a type of regeneration. This type of symbolism is unheard of to the “strong” innovators in Rand’s universe. 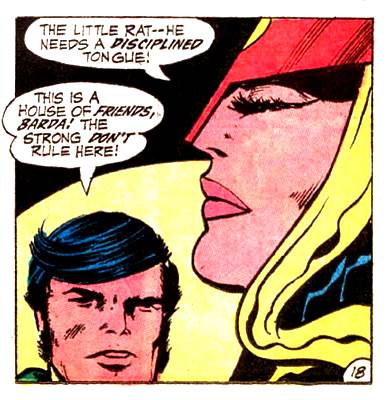 However, without that sense of “weakness”, their so-called strength is that of the Minotaur. All head, no heart. When I say “strong psychology” I mean the urge to build, to see the sky and stream and forest; the urge inspires a vision of order. Randian order is a labyrinth, and that is why her world has no primeval lust. The order we are living in has no foundation, no romantic vision. What it has are ritual formulas of language that are as self-perpetuating as a labyrinth (Alternates 3).

It’s odd how even creative people seem incapable of recognizing this. Comics artist Steve Ditko has devoted a lot of his post-Spider-Man work to screeds like Mr A 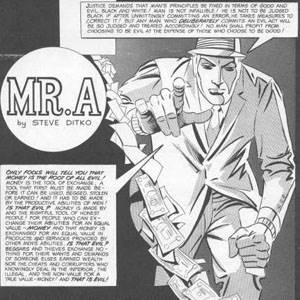 Well, Steve will always be Dr Strange to me; the man who takes on the dark side. What you could say is that The Fountainhead is all light, without the dark, regenerative primeval lustiness, good and evil. This brings in Nietzsche (Beyond Good and Evil), and the most likely thing to say is that both Rand and Nietzsche are world-builders par excellence. Both are poet-linguists and what attracts people is the language as much as anything else. Both deal in characters (Zarathustra) and perceptions and events.

So, you can see the attraction of Rand, the passion. However, the world we live in isn’t Nietzschean, it bears much more resemblance to the shining Metropolis of Rand, and there is something rotten at the core of that world. Nietzsche was a classicist par excellence, and spoke often of Apollo as appearance only – an ideal. The world of the ideal is touched with decay because there is a hint of regeneration (Artemis).

Without that basically cyclical process, fertility and the gaiety of the vine (Dionysus) can’t persist. There is a melancholy and a gaiety in Nietzsche which I think is quite similar to Howard. If you compare Howard, and artists who are attracted to his world, the presence of picturesque ruins is inescapable. The presence of primeval lustiness is never far away, and everything is rendered in dark-etched lines of boldness. 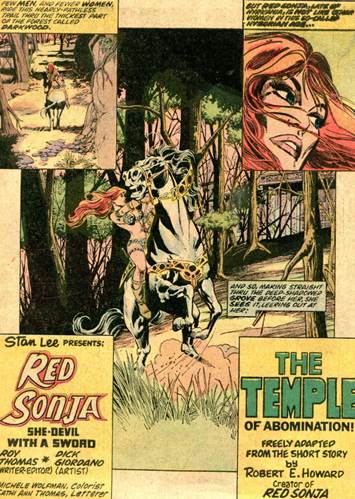 You notice it says, “deep-shadowed grove”. The romantic ruin is dreamlike in that respect, almost shambolic, the mixture of the ideal with the encroachment of nature. Greek idealism is not to be confused with reality; it is appearance (Apollo) for the glorification of the gods. A vision.

Idealism is appearance only because there must ever come decay – and hence regeneration (Artemis). This is what a revival is; you visit the classical ruins and observe the ivy-clad elegance, a goat grazing nonchalantly, blithely unaware of the nature of the place it occupies. You gaze over your donkey’s mane at untold history.

Rand’s is a “universe of logic and passion” (Intro page 10, Ideal, NAL 2015), of idealise people who retain a certain aloofness. Thus, it is not built on true closeness, the intertwining of root with rock, of ivy with marble. Nature is built on very close associations, and this goes right down to the clay, the sun-baked clay for adobe walls, that constitutes the earth, the worm-enriched dirt, that harbours the trees of the grove that encircles the classical ruin.

None of that would have crossed Rand’s mind in her ivory tower. Randian idealism does not decay and so has no conception of fertility. Without fertility, there can be no Dionysus, no gay rites of harvest, of plenty, of vine. The Randian universe has no primeval symbolism and therefore no connection to the soil of the Earth. 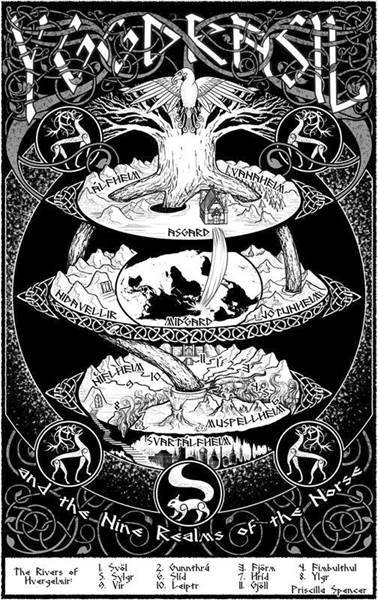 Could this be where the Martians come in, because let’s not forget how very influential this type of super-capitalist future was? The point is all of our economics is built on a “house” because the root of the word is OIKOS, household (eco-nomy; eco-logy).

Oikos, the world we are in, very much resembles The Fountainhead’s airy notions of high finance. “The future we are going to inhabit” is one of hyperloops, smart-houses, electro-greening flash paradise. All gris to the financier’s mill. In their world there is no shambolic rustic decadence because everything is (b)rand new. It’s straight-line progress that does not recognize life is a cyclical process.

I mentioned in And God Created.. the prevalence of prefabricated croft Kit House designs in the Highlands. It never occurs to them that rough-and-ready ruins, or near-ruins with adobe walls, are picturesque and can be renovated/ I mean, it may occur to them but they have to pull a profit.

That’s exactly it. The point is if everything is (b)Rand new, there can be no decay. But, actually, the hint of decadence in, say, rooftiles (lichen) is always very picturesque. The hint of the intrusion of nature like ivy on a wall is gris to an artist’s mill.

This is what Grace Slick said about “1798” (prev.) The aesthetics of artisan-ware is much better. Not because they’re decaying but because they’re old and not prefabricated. Beyond that, the houses of 1798 were enclosed by natural surroundings. I’m not being a luddite here; if everything is new and the old is replaced, that is actually the idea of any hint of decadence, of mildew in the air, and with it fertility or revival (of the old). If there were no classical ruins do you think the Renaissance would have happened?

There is something rotten at the core of the modern world for that fact; it’s a way of constantly replacing things and of course the financial industry is geared to invest in that. It’s not a question of being a luddite. There is corruption at the core of a financial system that invests in novelty at the expense of fertility and regeneration (this guy is typical of electric-greenery http://www.lomborg.com/)

We are told there’s an electric-green future but that’s just a word for another industry. What ecology actually means is that there are wolves in forests, silent streams meandering down wooded valleys, the odd classical grotto (a la Belle et la Bete). This is what “they” don’t want, and why it is time to retake what is actually ours, the land (Yosemite, Yellowstone).

There is a philosophical aspect to this revival, of which more in part 2.