Pascal Doury's cutting and dicing of dueling office-workers could be likened to the profane psychosis of GM "bleeding" meat (as promoted by Bill Gates of the culture-destroying toilet), where you don't know your brisket from your rump (or your ass from your elbow Hyborian Bridge 59).

The profanity is that meat can be bred without the symmetries of a proportionate physique. As noted in HB59, the psychotic serpent is the figurehead for GM meat; the serpent which lives inside the perspective illusion of hygienic science.

It is the serpent of psychotic reason, the serpent that would breed meat with no proportion. This is the sausage-factory of Tout Va Bien (), or the glib sausage-seeller of Aristophanes' The Knights ().

Breeding is a psychosexual pursuit, and the basic safeguard is that animals and humans have dynamically-balanced physiques that move in active situations. The profanity of the psychotic serpent of reason is that active pursuits are not hygienically necessary.

The animal physique is no longer needed, but there is then a psychosexual component to the breeding of GM meat.

They are breeding sausages-or serpents - rather than physique. Hygienic breeding is a type of physical boredom; the physique cannot be denied, and the result is sexual psychosis - as in Pascal Doury.

If you notice, his dueling figures are sexualized, and almost resemble cuts of meat with sex-organs attached. The notion of heroic combat is really grossly misrepresented into an obscenity.

In the natural state - of an organic farm - breeding involved gestation and birth, a cyclical activity of growth and nurturing. Anything cyclical destroys repetition, in the same sense night destroys day.

A sausage-factory is pure repetition; the assumption is that the animals are bred outside the factory on the range. If that is no longer necessary, the destruction of repetition is no longer occurring.

Repetition is simply electromagnetism; intelligent machines as opposed to organism. A repetition or a copy is also a reflection (sun). The reflection occurs inside the perspective illusion of modern science but, since the physique can't be denied, the profane serpent is also there.

As noted in HB59, that makes the GM industry oddly like Stygian Khemet!

Inside the perspective illusion lives the profane serpent - the obscene god "they" worship. In Pascal Doury this is portrayed as sexualized figures in combat, where the sex is the only thing with authentic physique!

What's needed is strength; the free-moving body of a dance-form, and a psychic content of antagonism to mainstream logic.

In one sense, it's a bit like an ancient court of strong style and affectation. In the modern context, a good approximation are rock and roll icons.

One good example is the Kantner/Slick 73 album Baron von Tollbooth and the Chrome Nun, with Dave Freiberg as a sort of court jester. 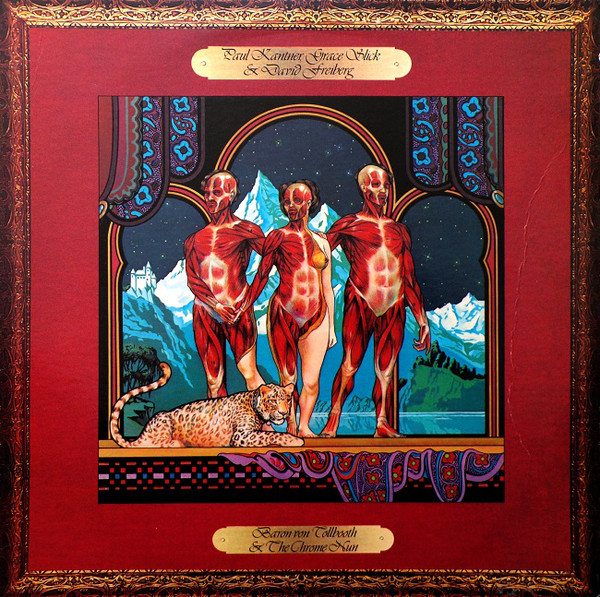 The three figures are portrayed in dynamic anatomy, as heroic participants in the journey of planet Earth through the stars.

They say that pop repeats itself, but actually classic rock is quite cyclical. If you say a repetition is an endless advance, rock tends to go back to previous forms such as gospel or r'n'b. Frank Zappa was an exponent of that, and Grace Slick is somewhat similar. In track #1 her sarcastic antagonism to mainstream religion is relayed on top of Freiberg's gospel inflections.

BALLAD OF THE CHROME NUN

There is a courtly sense to that era of San Fran musicians in that they lived somewhat like old-time kings and queens, complete with courtesans.

They perpetuate passion and wordplay rather than inculcating citizens with "facts" of a Black Sun of illusion.

It's instructive to look at the three albums that transitioned the Airplane to Starship. 1971's Blows Against the Empire, Kantner's politically inflected sci-fi fantasy of escape. Sunfighter, which celebrated the romance and birth of China (a cyclical event of significance). Followed by Chrome Nun.

There's a narrative there of rugged space-tech; the womb as a harmonic instrument; and sarcastic antagonism at the mainstream.

In the olden-times of divinely-inspired monarchy, government was a microcosm of a larger order in the universe. This order is a figurative reality; in other words, is represented by a proportional human figure.

The Chrome Nun is one of the best examples of this, in that the figurative manifestations are very strong, and relate to the cosmos as a whole. Kantner's Your Mind Has Left Your Body could be taken as an ode to LSD, or equally as the revival that follows death (on the sleave notes he prefers "deaths in exploration.. going beyond the norm").

YOUR MIND HAS LEFT YOUR BODY

This sort of psychic experience that supposes an end to logic and a beginning of something else is anathema to the mainstream, since it is finality (see Clifton, prev.) Finality is the counter to the endless advance of a profane psychosis that exists inside the perspective illusion (of the Black Sun).