Rather than living in a perspective universe with the sun at the centre (straight lines, electromagnetism), an alternate scenario is that we live in a universe that is woven into various shapes.

There are the shapes of the night sky; the wandering planets that weave in and out; the drifting now closer now further of sun and moon.

It's a big step (or step back) to see with no perspective. It was originally the was stories were told - as with the Bayeux Tapestry (see prev.)

While perspective gives the illusion of reality, a tapestry has muscular style of the different colored threads woven into a pattern of events. And the psychic content if the events, which speaks of kings, conquerors, ravens of battle, the sequence that ends with victory in the field.

The idea with a tapestry is that the threads weave together style and content; the threads represent the movement of events. Roy Thomas in an issue of AE likened the continuity of comics to a tapestry where everything is interconnected (from the origin, or even pre counting retcons!)

There's a sort of confusion arising since perspective is photographic realism, not storytelling. Comic artists may or may not use it; they can use completely different methods as, say, Siencewicz did in Elektra, Assassin.

In amongst all that, vanishing points could appear. As CC Beck says, they're easy to throw down, and not necessarily accurate. It's  just a technique.

So the odd thing is perspective technique is an illusion that appears real. However, dynamic anatomy - if you look at the muscle shapes that animate the body - is a lot like thr movement of a woven thread.

Not s bad example is BWS's "The Enchantment", which throws down a vanishing point to create a sense of depth and frame the central heroic figure - with his lady. The figure is sparely animated, but enough to delineate sense of foreboding. 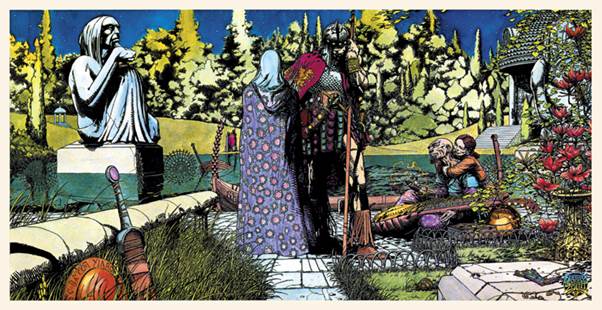 So much of narrative art is figure-based, whether the style is heroic, or anti-heroic as with Sim's Cerebus, or even macabre as with Doury's William (P121).

According to ancient religions like Hinduism, yes. Madame Blavatsky's Theosophy () also looks back rather than forwards to a universe of emanant psyche, represented on the physical plane by the planets.

The sun following the moon and vice versa through the sky and into night. A physique us serpentine in that threads interweave in sinuous ways. There are ancient monuments such as those to Kukulkan - the feathered serpent - in Mayan Mexico.

The serpentine physique can't be denied, so that is loose in a logical system. Any system which is ostensibly logical will always be inclined to be psychotically serpentine because of that fact.

The serpent, because it is a primal rhythm, is always going to be around, and any logical system is like Euripides's The Bacchae that seeks to deny Dionysus's godhood - to macabre effect.

Pentheus's fate is not unlike that meted out by William to his rival office-worker! The logical order is of the head, and denies the free expression of the active body in the field. However, since the physique can't be denied, the result is the psychotic serpent is let loose into the supposedly logical society.

After all, what us order without the human physique? It's an illusion of the head. The illusion is the perspective system or Black Sun of numerical compulsion (the Grace Slick quote again, HB62/1).

This is where the likes of Musk are heading; into the vanishing point of technique, or physical nothingness. Ones and zeros.