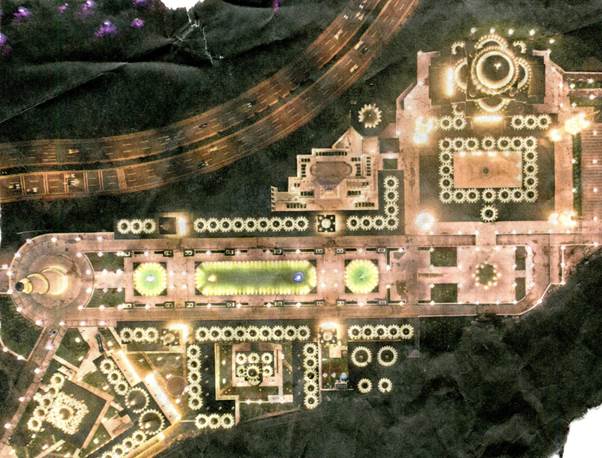 Here’s an aerial view of a new Mosque in Ankara next to a road that makes a nice visual illustration of the two different worlds. The proportions of the Mosque segment its geometry and make it an interesting interplay of numbers and angled shapes. A living, tiered edifice of communal spirit (Weird 11 Roman baths, cathedrals, woodland grottos)

A road is sameness, while a railway track is often used to illustrate parallel realities that can crossover (CL Moore The Code Pictorial 14). One of Moore’s descendants, Joyce Carol Oates, has a tale in Ruby Slippers, Golden Tears (Avon 1995)that makes repetitive use of railways and vanishing points as representing technological sleep. In The Crossing, trains and vanishing points gull Martha with a landscape of no-thing where nothing happens (Sleeping Beauty).

Martha climbed the embankment to the tracks so that she could watch the train disappear from this perspective: the tracks, to, radically narrowing, coming to a point to vanish. (page 85)

The classical tale, also known as Briar Rose, features heavily in the collections of feminine-oriented modern fairy tales (edited Datlow and Windling, Snow White, Blood Red and others) so must have some sort of grip on our modern imaginations. Are we sleeping our days away in a hypothetical universe that has no origin? Are we being gulled by the maddening light of the sun? Are “they” erecting unsurpassable briars to hem in our primitive unconscious?

I’m reminded of the classic X-Men 59 (Thomas/Adams), where the Sentinels are gulled into heading straight for the source of all radiation-induced mutations 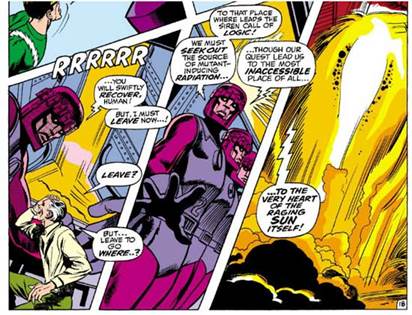 The sun, as is well known, is a pulsating ball of light. The physical shape of relativity is likewise round, as you can see from the Cathedral of CERN 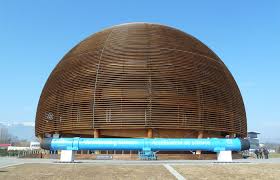 CERN is extreme order, so is precisely featureless. The ancient Greek maxim was, “nothing to excess”; a Greek temple is an exercise in restraint. For every extreme there is an equal and opposite extreme: sun, moon. In Greek mythology, sun and moon are joined in Phoebus Apollo, so the two are almost incestuously close.

CERN is simply a concrete example of the calm madness of extremism, without its natural opposite, staring into the heart of the sun and detecting spots. Even though it appears rational, there is a psychotic delusion seeping out of its calm exterior. I once heard of a pop-group called Einstein-a-go-go, and that gave me the idea of a CERN house band. The band is stupidity personified and is shaped like CERberus, the dog-headed guardian of the underworld. Each head is Einstein – artist Elena based her sketch on Eurovision winners Netta 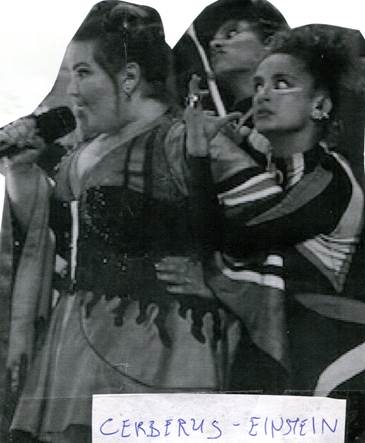 (multi-head sketch due by Elena)

From the preceding, Artemis in myth seems to crucially balance the shining brilliance of Apollo. Nietzsche, as mentioned at the start of Tales of Faith 10, seems to have focussed on the relationship between Dionysus and Apollo – in The Birth of Tragedy - and you could say the huntress Artemis – personifying fleeting action and dark mystique – is more suited to the American West. This could be a distinction between European and American philosophy, particularly in the homespun fatalism of Ralph Waldo Emerson. The gloominess or fatalism of the West is a characteristic that you could say is typically American, personified by laconic men of action and derring do.

It is a type of reality that is being lost in our age of Apollonian extremism (and extreme stupidity). Of course, gloom and mystique is not only RE Howard’s main characteristic, it also characterizes Weird Tales as a cultural artefact, to varying degrees as a tone poem and visually through Margaret Brundage’s female infatuated curvaceous covers 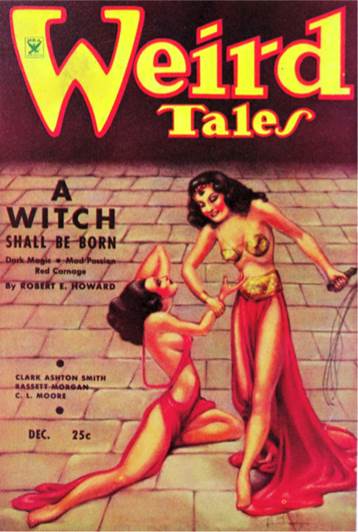 There could be a Briar Rose/ Weird Tales connection somewhere here. Another interesting connection is Warren Ellis’s  Planetary series. In one episode he tells of the hidden heroic lunar-missions of Artemis that went light-years beyond Apollo and created a breed of depraved supermen. That sort of dark vision of reality is nearer the bone than many would think.

For all their flaws, the Snow White, Blood Red series are the best fairy tales of the modern era, probing beyond the surfaces of feminism and sex to matters of life and death. Kathe Koja’s Waking the Prince tells of a modern Adonis whose conscience sleeps through the ups and downs of a relationship while, in fairyland, the real prince smiles in his slumbered casket.

We are continually told life is a struggle, that we must fight tooth-decay, heart-disease, cancer till they’re “beaten”. What will be beaten is the spirit of Man as we lie encased in our Amazon Houses on our plug-in cybergenome sofas (© Zappa 1978). We have to fight back against the dragon of ego-lust to regain what we have lost – our agrarian and serene dream.

If the American eagle is to rise again, we must recognize there is no struggle involved – Pictorial 5 aerie – no techno-ego, no dog-eat-dog beggar they neighbour nothingness. No Apollonian brightmare of hyperlooped  aeromobils. There is just soaring majesty in lean grey skies over pea-green peaks.The America of sublime primitivism that even a Trump would be hard-put to buildover and make “great again”.

It’s not just America; remember the Kibbutzim in the 70s? Communal spirit, choral chants and round-dances in the gloaming. The collective unconscious aroused again. Since then, the powers that be have made damn sure that the political-military order vastly dominates any unconscious awareness that might seem like harmonious vibes. God forbid! In Russia too the political-military elites are vastly dominant over the endless steppes of Mother Russia. What they want is a neverending struggle for supremacy to feed their egos of Apollonian excess. The irony is Apollo feeds off ego, leaving it a featureless husk.

The real Russian conscience is heard in the Polovetsky chants of Borodin’s Prince Igor. A heady mix of savage peasants and high-strung aristocrats; cheery, gloomy, wild and free. 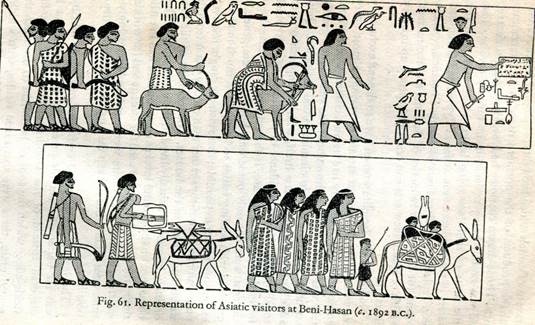 semi-nomadic Jews of the time of Jacob (Archaeology of Palestine)

As far as I’m concerned, Polovetsky, Nomadic Jews.. all the same thing. The communal power of the awakened unconscious. The human as animal and not as humanoid. The human throat used in rousing choruses and not in rabble-rousing (Pictorial 1)

This is the ancient world of empirical truth – sound, smell, touch. Man the hunter, falcon and friend. The tracks of spoor – dirt and cleanliness, figurative meaning (read Last of the Mohicans for Christ’s sake). The empiricism of nature cannot lie; the empiricism of science can only lie because it is a half-truth born of logic not of balance.

The ego is let loose, the dragon or worm of ego-lust, to prey on the psyche. The human psyche is nowhere; the animal physique is nowhere; the lustiness of the throat is nowhere; the dragon is everywhere. Know your enemy. We have to identify with the Earth again, our Mother. The Earth does not lie; she is an ancient empirical force. Jerusalem is an ancient empirical force – a spiritual nexus – but that’s not the same as being a modern capital, when all our capitals are tied to a sort of parallel reality of sameness, what thay call the empiricism of the dollar, or the worm of consumption.

If there are two empiricisms – one of nature and one of logic – it’s no wonder we are so confused! Religion allows for doubt, just as nature allows for mystique. Without doubt we would inhabit a purely rational universe, but that is plainly not the case. Doubt is the lack of an ability to place a logical framework over events; the need for higher truths of symmetry and proportion (CH5 Weird 11)

As a non-practitioner, I still say we need the higher truths, and scepticism for those informed sceptics who call themselves scientists. Their truth increasingly resembles that of the cybergenome Replicates in whose image they are built. Is that the future we desire?

Well, “they” will sell it regardless. We who are born of Earth must take back what is ours; the spiritual places of power; the empirical residues of sound, smell, touch, dirt and cleanliness (meaning - epistemology). Man the hunter and falconer, the “natural man and woman”, must defeat those who prey on our psyche and physique with false promises of comfort and ease., a living death of psychic sameness and enfeeblement, the parallel world we have been sold over the years.