Mind, body, society – the trispiral of human culture. It’s always escaped me why prophets of the future never appear to concern themselves with off-planet culture since that is mainly what pulp sf does! Do “they” seriously expect people to travel to Mars and exist in some sort of abstract faith in the evolution of technology? That is a recipe for cyber-culture and the death of psyche.

Perhaps that is what they want, a supine mind ready to be plugged into AI-boosters? Space-culture needs its own symbols, ceremonials and realities, something like Starstruck, an organically complex life that isn’t subordinated by technology, with rich rituals and a sex-life. I’m probably influenced by Paul Kantner’s 1970 sci-fi album “Blows Against the Empire”, which is a rebellion aboard a spaceship bound for Jupiter.

A technology that does not acknowledge the human condition that we need faith as a friend in the unfriendly cosmos. Faith acknowledges our mortality and finds meaning in it. Anything else is rocket-propelled psycho-madness casting Man into a dark and hostile universe. Those who wish to follow Musk onto the Martian plateaus – have fun, kiddos! For rebels, the first task is to build a viable culture, and for that we need faith. Faith, not in machines but in people. What seems to be happening is there is a new technological space-race, this time Musk, Vodafone, Amazon, Google so that you will soon be able to phone the moon and get extraterrestrial broadband.

All that stuff is infrastructure, and infrastructure is boooring. To have an entertaining culture you need to establish large and complex bases, almost like the old city-state. The only conceivable way to do this is slowly, not to blast human-specimens on Marscraft but to build a station in near-Earth space. It would be a rec station 97 of the 21st century.

We rebels do not put technology first – that is ego-lust leading to AI-dominion in space. We will not surrender to ego-lust, and call on the old gods, on Christian morality, to sustain us on our path.  If you go back to “The Human Hourglass” (Pictorial 13) there are 2 futures. One is a parallel reality of ever-more sameness; the other is a vertical culture of differences. The psychic world of belief and the warrior of physique (action). In space, the hourglass can be turned back to build a vertical, tiered reality of cultural complexity (Starstruck, the Vale of Tiers).

As the instigator of this project I suggest a branch of Christianity that veers towards the wild side, patron-saint Mary Magdalene. Magdalene in some eyes has been traduced by established tradition; off-Earth she will be honoured. Magdalene was the first to witness Christ’s resurrection, and her cosmic station will be assured off-planet.

The Boy’s Own technology of Musk at al cannot foster such a feminine faith, so we must develop our own means of transport. A space-station tends to be built with rockets over time (as with the ISS) but – in order to transport large numbers of people – an ultra-safe transport-system must be developed. This means low-technology, so I suggest a slow, multi-stage (non-rocket) system comprising aircraft, dirigible, then rocket in that order. Aircraft will deliver people to a large high-altitude dirigible where they will train for space-life.

The rockets will glide off the dirigible prior to firing their rockets (I’m not stupid!) Each rocket will add to the structure of the space-station so that gradually, after 20, 30, 40 flights, the size increases. This system is ultra-safe as it relies on slow, low-technology. There’s no need for the mother of all blastoffs (that would cause devastation on failure). The rockets would not be staged rockets so risk of failure is much reduced. The stages are slowed down vastly, going from traditional aircraft, then landing on dirigible, finally gliding off, powering-up and reaching space-station orbit.

The warrior is the servant of the vast unknown, and calls on the old gods to give them direction. For the world of fact is a vast maze with no direction. Worms twist and turn in the ground; seagulls stamp to draw them forth; these are eternal moments on the infinite seas of fate.

We call on the swooping ravens, symbols of war, to strengthen our resolve against dark forces of law and order, on the elements and on the four winds. Our consciousness of ceremony is directed at Mary Magdalene to uphold our virtue. Our awareness of symbols and ceremony is directed at coincidences in the universe at large.  We are revivalists, and have the belief that holy ceremonies purge the universe of needless facts.

Man is fortunate, and round our dark space-station the mists and mysterious groves are reborn. Nymph and dryad flit out of sight. The warrior serves this just cause. “They” will call it irrational and they will be right; they who serve no cause but their own, the subjugation of human consciousness to “bits” of information (see Hameroff, prev.). Rational consciousness can only serve its own psychotic lusts, couched in the dry-as-dust language of finance and genomes and cy.

Roman law aids this unholy cause and against it we set the grammar of our sinuous bodies, our reptile spines, the melodies and rhythms that emerge from our throats (Pictorial 1,3). “With a hey nonny nonny”. For this is the old order that is not order but proportion. We are reviving the artefacts of Man that merge into gentle nature; the classical order of which law is just one aspect (Hyborian Bridge 2). We are reviving superstition, where the law has played into the hands of vile bureaucracies - the parliament of cy.

Where the law is no longer valid, of course there are always questions to answer. The warrior has to question his duty, as Solomon Kane does in Skulls in the Stars. Having chained the murderous miser to a tree on the moor and his self-deserved doom, Kane sighs,

“Yet my heart is heavy within me.” One of the villagers replies, “Nay, sir..you have but done the will of God and good alone shall come of this night’s work.”

Kane may be an iron-controlled adventurist, but he is no puritanical do-gooder (of the modern persuasion). He inhabits a world of superstition and the primeval spirit of jungle drums.

In his mission to purge evil there is no sanctimony, and he is known to accept the aid of sorcerers, as in Red Shadows and witch doctor N’Longa. There is in Kane an acceptance of primitive justice, very Old Testament, in a world where law and order are non-existent. As Weinberg says in The Annotated Guide, the plots are rife with coincidences, which could be said to be a weakness. However, in a world of no order, the only order is that there is some sort of mysterious, intuitive rightness to the events.

In fact, that was a common belief amongst people of the Elizabethan era (see prev.) We live in a world where we are told “order” is the norm whereas it is the equivalent of death (see Weird 8   Korvac). We are never told of primitive ritual. I came across a startling example of this in a trend for “forest bathing”

If there were more dirt trails and we lived like peasants – more primitive, in other words – there would be no need for “advanced” treatments. What they never say is we are too advanced and that we need to reengage our intuition. An ancient forest has a sinuous, classical grace, the intertwining of differences, life and death. If you believe in coincidences, then a forest is a primeval work of coincidence.

The herbs that grow on the edges – parsley, sage, rosemary and thyme – the   barks, the spider’s webs, the microbes of the soil, the spongy crunching of leaf-mulch. In air, in tree oil and mist, in earth are a coincidence of cavities and sinuous shapes that together are magic. That restore health body and mind. That cannot be parcelled-up and sold. This is the forest that Elizabeth I rode through to reacquaint herself with life and death, soul and the human (Weird 8 The Faerie Queene)

American Indians often called themselves humans to distinguish themselves from their animal kith, such as the trickster Coyote. In a forest, or on the limitless plains, law and order cease to exist and there is instead the primeval “law” of coincidence. If the cosmos has proportion, a forest is a child of the cosmos. If the cosmos has good and evil, so has a forest. There was quite a telling comment from Melanie McDonagh of DT; going into the rewilding of parts of Britain with enthusiasm she nevertheless asserts,There was a sound reason why wolves were hunted to extinction. They’ve a pedigree in children’s literature..

Oh boy, so no Red Riding Hood? That is so typically modern. They like to think things can be all neat and tidy, no psychos, no riff-raff. That is not a forest, it’s an urban shrubbery. I urge Mel to get with her collective unconscious and learn wisdom. Red Sonja learnt that is Roy Thomas’s retelling of the fairy tale (“She Devil with a Sword” in Kull and the Barbarians 2). Forests  are there to instruct you, not with sanctimony or even information, but with age-old mystique. Good, evil, life, death, human, anti-human. Dreams made form. The psyche of the cosmos.

An alien mind – the law-enforcer – has stolen from us mystique and coincidence. Even the trend for tree-planting (by royals) is way too neat and tidy. A forest is what you find in The Lion, the Witch and the Wardrobe, something age-old and beyond human ken. Our collective memory is in folk tales, and the collective American memory is the Wild West when law and disorder waged a titanic struggle.

The distinction between justice and law is very marked in a time where the badge and the gun went hand-in-hand, when land was the prize with its wilderness charms. Justice is untidy and amounting often to little more than mob rule, the merciless legend of the West, where differences are settled by citizens with no recourse to law.

The gavel gradually gained ascendancy, but law does not necessarily mean order in a society with the magic of neighbourhood intact, “Anytown USA”. The sense you get – from Grace Slick and others – is that pre-60s America was law-abiding but not ordered, quite ramshackle. I suppose you guess where this is heading? When authority tries to impose order on society, that is not the same as law. Law is peace or security. Order is an ideological tag that goes against the organic grain of American townships.

I happened to get an old vinyl disc of Gluck’s Orpheo and Euridice with Grace Bumbry, who’s black. 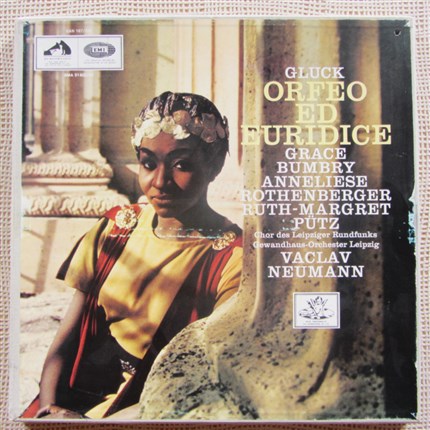 I looked her up, and she studied at various colleges, got a scholarship in Missouri but the place was segregated and she ended up at Northwestern. The school she went to, Charles Sumner, established 1875 was one of the first black high-schools. What struck me about her story was there seemed to be goodwill in advancing her career, and she even met Lotte Lehmann who became her mentor. Her story is an organic one where it seems justice will out but there is no overriding order to “do this thing”.

Organic societies are freer and, as a consequence, more coincidental. Yes, that’s the forest connection! As another coincidence, Gluck was the son of a Bavarian forester, as probably were a lot of Germans in those far off days.

It’s not the law that kills an organic society’s goodwill, it’s order. Of course, the law has then to keep the order, and that is what has happened since the 50s. The real loser is the benign sense of coincidental events in any organic commune. It’s what you might call spirit, the soul of a place that is untidy and ramshackle and where “bad things can happen”. This is what the law is there to deal with. Once you have order, the end-product is cy, and even more order. Eventually you have the dread