Fortune, fate of the individual, means power over events, a story that you make yourself, in your world, in your kingdom (the gods themselves). Fortune is in the turn of a tarot card; it is in the stars. Fortune depends on pure luck, and it is a powerful force of the universe. It is born of the dragon’s egg, of the ovum that is a universe unto itself. This world is what you could call geometrical, almost surreal. It is pulsating with blood-plasma; it is very feminine.

That is fortune and fate, and that is a story. What proof is there? Well, listen.. What “they” desire is a world of facts, namely DNA. Algorithms comply, and so there is a machine-future waiting that is partly DNA and partly machine-intelligence. We will then have no power over our destinies because we will be a product of DNA-editing (by machine).

This future has no power because it is a psychosis that emanates from the (hidden) dragon of the unconscious. The labyrinthine factual domination of this future traps the dragon in an ego-factoid hell of vileness personified. How can I say this when DNA-editing might “cure” certain conditions? Because the primal rhythms of the female dragon weave between reason and pleasure and give meaning to both. This is strength and determination.

Their future is weak and without hope. It is without fortune, without faith, destiny, without a story that is determined by you. Their “cure” is a form of weakness, of rule by ego-factoid megalomaniacs like Dawkins and his ilk. We need the primal strength of the female serpent that circles our unconscious and that circles the earth. Purity unites with the dragon and in so doing cleanses the soul. “Their” future is essentially unclean because the very idea of voluptuous sensuality become passe.

The psychosis that erupts from the ego-centric replicates is a sort of sex-by-proxy, and we become like automatons. As you may have gathered I’m a fan of Zappa; he was ahead of the game because we know modern devices affect the pleasure-centres (especially of kids). DNA-editing is another box of tricks that won’t even be carried out by humans but you can be sure it’ll affect the pleasure-centres of our ego-tastic friends!

Pleasure and reason. But without the rhythmic interplay of serpentine weaving neither have any strength. We would be living in a world of pleasure and reason with no powerhouse of the unconscious to connect the two. In all but name we would resemble machines in limbo awaiting the face of the grim reaper.

“Cure”? It reminds me of the famous “What If?” Avengers yarn featuring Korvac. This was eloquently amplified by John Clifton in TCJ #90 (1984) so I’ll just quote him.

By arranging the story so that the power of Death emerges at the very moment Korvac had amassed infinite power without a trace of love, activating the Ultimate Nullifier at the exact instant he sensed the hollowness inside him, Gruenwald succeeded in equating Korvac’s conqueror drive with the suicidal instinct.. the What if? Korvac story is the most succinct presentation of the concept of nemesis the comics have so far produced. (page 110) 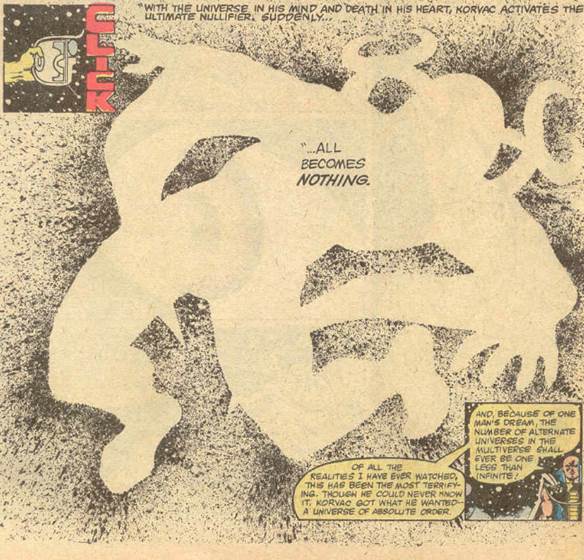 Yes, exactly, hollowness is reason and pleasure without the unconscious connection that is reality. The unconscious connection is what we unite with, what we fear or what we love but what we must have to be human. We would be living in a universe of pleasure and reason but no love. The machines that become one with DNA in the future will act as the Ultimate Nullifier by cutting Man off once and for all from true love, from uniting with his unconscious. The psychosis of pleasure on the one side and reason on the other in a labyrinthine soullessness is already on the way.

Again you say how can I say such things, and again I say this is the future as written by Bezos and Co; you will live in s smart house that will sense health deficits; your immune-genome complex will be tuned by pricy drugs targeted to your DNA-fingerprint; the news organs will relay endless facts that tune the neurons ion your head.

We will be a hybrid species, the death of hope. DNA is the ultimate fact but that is not what we are. We are primal rhythms of the unconscious that emanate from the human physique; the nigh-sacred proportions of head and limbs. That is power, and it is a universal force. Without the universe there can be no true love, no hope, faith, fortune, destiny. The Ultimate Nullifier, at the same time it gives you “health”, takes away your will to live and leaves you as an an automanton. Health is not actually a fact but a state of mind and body and soul able to experience sensations bequeathed by the soul of the universe. All else is as nought.