So, the future of Apple & Co is “no style”, a world of no introspective content. As a comics fan, there is no narrative without introspection, there is empty style. Intuitively this is true, as Greek myths have a strong psychological dimension, and Greek tragedy strong style. Convincing narrative.

Whether or not the “powers that be” are aware of it, realism has already ended. Empty style and empty content means facts and figures become the reality. The world is obsessively inward turning, there is no convincing narrative.

What is a convincing narrative? The way things change and the way a catastrophic metamorphosis can be just around the corner. The sense of empty style and empty content is really a psychosis, as a strong psychological content is at the foundation of society.

Narrative art can seem somewhat fantastical, while being psychologically penetrating. One such is BWS’s “The Enchantment”..

..partially inspired by Cat Stevens, specifically his "Buddha and the Chocolate Box" album, further specifically: the songs "Music," "Jesus" and "Home in the Sky." Apart from the enchantment of music (of today), the heart of the theme is the Doppleganger legend.. And its chemistry is Death and Re-lncarnation. I suppose I seem quite stuck on this topic as all my pictures, with the exception of The Sepia Horseman and The Four Ages, deal in varying ways with the twisting of Time and Space, Life and Death and ultimate re Creation. (BWS, GbP)

For society to exist, such psychological realism has to exist. Of course, it does so in Renaissance paintings; I could spend the next 100 pages going through various works by favourite artists Titian, Pontormo and so on. More than that, though, imagine if you will a scene with a Wild West atmosphere; corridors with Old Masters; surreal shootings; flagellation and a stuffed crocodile.

If (1968), produced roundabout the time of the student riots in Paris, is maybe the closest the British get to magic realism. Claustrophobic discipline, brotherly hate, breaking bounds in surreal scenes. I happen to be related by marriage to maverick director Lindsay Anderson, and am acutely aware of his Wild West affiliations, the huge vistas of John Ford’s communality. “Crusaders”, the original title of the project of futile rebellion; the world is lost; ritual has replaced vitality. For LA, the school is the microcosm of a lost social order. There is something medieval in the climactic scene of gothic chapel, chainmail and the three knights and one female in armour.

The inn where they encounter the Girl, the Packhorse, has a Western connotation. The film seems to imply that “resistance is futile” but heroic, moral. The moral force that is found in John Ford Westerns. The moral force is life – violence – against the mundane and dead. I’m not going to critique the film here, but how does one square that attitude with civilized values? LA wrote:

That affirmation should have become the prerogative of politicians and blurb-writers is shameful. But this meant that belief has to be rescued, not that it must be abandoned.

My assumption is he means marketing, and that marketing as a science has replaced reality, which is the individual, the community, the land. The relationship between the individual and the community is the basis of many Greek tragedies, the psychology of loyalty, hubris.

Relationships are the basis of a free society, and they involve contradictions of life, death, freedom and order. Contradictions in a marketing society cannot exist; there are only facts or “blurbs”. The revival of a communal life that recognizes contrasts is the true rebellion.

In the film there is a nostalgia for communal life, perhaps as it once existed, or in the imagination. Counterpointing that is bizarre fantasy that exaggerates the ritualistic aspect. There is a sense in which the school is an institution that can be saved, but how? Well, British Public Schools are supposed to provide the politicians and governing class for our society but, if the society is run by marketing, there is a complete social dysfunction. Marketing is not reality, it’s a type of fantasy, almost of ritual.

If our societies obey rituals that is not the fault of schools, unless they are caught up in the same madness. Hence, to be realistic, schools should detach themselves from the society. The school itself then becomes a place of rebellion, as in If.

This is the nature of societies bound by facts; they have no reality because both the style is a sham and the content has no psychological truth. Schools and other old institutions can become the springboard for real, psychological honesty. The contradictions implicit in this are life affirming.

Lindsay’s films are known for their homoeroticism, so there is one contradiction; the heroes tend to be red-blooded cowboy-types. 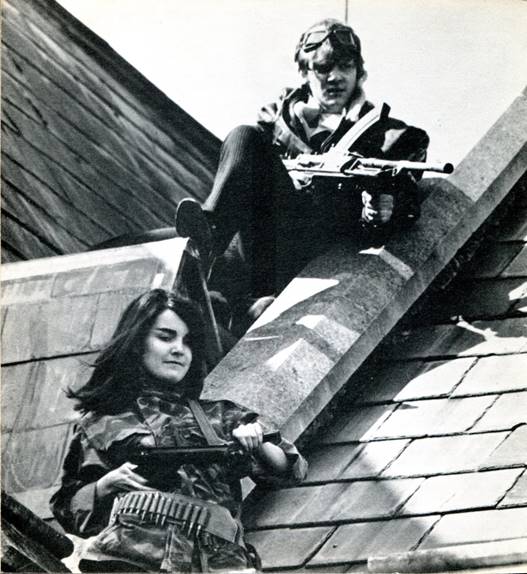 LA went to great lengths to universalise the characters as “wild”, owing nothing to social norms.

One of the things that I was very concerned to avoid when we started planning the design of the film was any suggestion of what is currently known as “trendy”, which would be terribly easy when you’re dealing with a film about young people. So that we haven’t used any of the kind of contemporary fashionable allusions or tags that would be used in a trendy film about young people made for the permissive society. Studio Vista, Movie Magazine 1969, page 91

This makes it very apparent he views the rebels as a “type” that has always existed. The introspective adventurer, as I would put it. You can see a very similar thing in Jean-Luc Godard’s 60s films. In Weekend, the character who ends up in the cannibals’ trough is completely non-affirmative. Even when his girlfriend is raped he doesn’t seem to notice. Only the affirmative people, the moral wild ones can be rebels.

The implication is that they could reform an alternate society that was not based on marketing (another theme of Weekend). This same idea comes into Chaykin’s American Flagg! – the futuristic zone where violence and sex are marketing gimmicks (Bob Violence, Vidiots), and is policed by Plexus Rangers. Ranger Flagg’s sexual adventures are refreshingly normal, and a part of the retro-style. 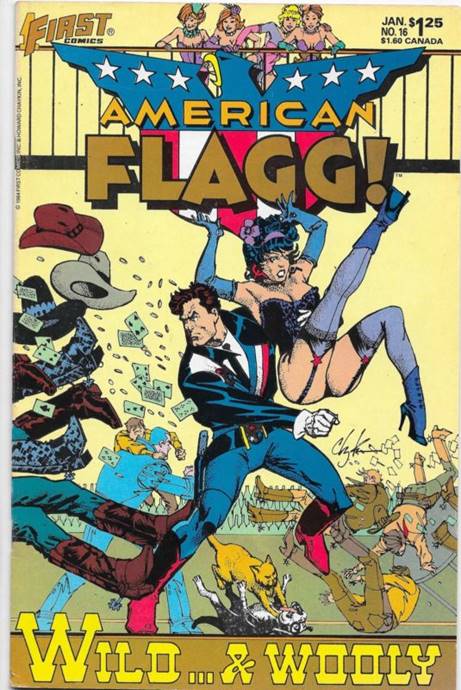 Basically, these are old ideas; it’s modern society that is novel. The sequel to If, O Lucky Man, is also worth citing. Travelling salesman Mick (presumably the same) escapes from a hidden army research base when it blows up, and troops through an Arcadian landscape of mist and trickling streams, winding up at a medieval church full of Puritans - they’re probably not but there are hints of medievalism. It’s almost like he’s travelling through time, and the “harvest maiden “allows him to suckle her breast, reviving him.

You are a man of business. You deal in facts. My colleagues and I are confident we can offer you an association with our country that will be as profitable to you as to us. The President of Zingara, a coastal paradise apart from the endless guerrilla war in the hinterlands (no relation apparently to Hyboria?)

Arcadia is a counterpoint to a poisoned establishment, symbolised by the quiet tinkling of a fresh wood stream – these also appear in Weekend, the scenes with the cannibals, who seem to resemble Iroquois Indians. The rebellion of Arcadia – which can be savage – against a faceless marketing establishment is a theme of these films. Even with A Boy and his Dog, Topeka broadcasts endless ads over the tanoy. Wildness cannot be marketed because it is innocent, though it can be savage.

I suppose this makes you think I’m anti ads? Well, a true reformation has to retake the meta-imagery of a country; the tinkling streams, wooded hills, mountain forests, bison, wild horses and prairies. You can still carry iphones which broadcast ads, but you can’t be sold down the swanny. Arcadia is innocence and so can’t be sold and bought. You can still buy and sell plenty of other things; Man has to live and work.

I’m no luddite; this is an existential question of the meta-imagery that feeds our psychology, our unconscious imagery, the imagination.