The 60s is a universal reference point, and there seems to be a mythos attached to it. Sandi Thom’s “I Wish I Was A Punk Rocker (With Flowers in my Hair)” has the line When pop stars were myths

It’s all too easy to think of the social and political milieu of race and war as defining the era of rebellion, but is that ALL there was to it? If you take Marvin Gaye, he was a fantastic mixture of selfishness and introspection. Here, My Dear is a chaotic ode to funding his divorce, What’s Going On is an ode to saving planet Earth.

Paul Kantner of Jefferson Airplane is (still) communist to the hilt, while finding it easy to write epics on the glories of the ancient world. Not a word about slavery or suchlike.

In golden Hannibal Carthage days, marching on to Rome,

Knocking on the door and finding nobody home there.

Rome she cut our armies down and left them in the snow,

So now I go to where I come from,

Now I go home to the sun.

When the earth moves again,

When the earth moves again my friend,

Let the lady ride on through,

When the earth moves again.

Egyptian kings they sing of gods and pyramids of stone,

And shinin' as a beacon for those that need a road.

Into the day and through the night,

We go and find our way home. (“When the Earth Moves Again”)

Grace Slick is equally keen on the olden times, and wrote the fabulous “Hyperdrive” on the falsity of linear time.

Slick is really a child of the 50s, recalling in her memoir Somebody To Love? The appeal of slapdash heroines like Betty Grable.

.. I clearly was influenced by the do-it-yourself heroines I’d watched as a child. They took it all without viewing “it” as something that needed a great deal of support to handle. Consequently, in the early 60s, when women started telling me I should join “The Cause”, that we should stand up for eachother, march in DC and so forth, I thought that was about as interesting as joining The Daughters of the Revolution. (page 7)

Slick has a tangential, elliptical approach to lyrics and seems to reside in the burgeonings of her fertile imagination (she’s now a painter). This quote on “1798 or 1998?” from the memoire coul;d be Jane Austen.

Then you both climb the Dutch-tiled stairs. The distant sound of the grandfather clock in the hallway – eleven chimes – confirms it’s time to retire. The last thing you see before you drop off to sleep is the view through the bedroom window: bright stars shining through a clear atmosphere, unclouded by smog or artificial lights of any kind. (page 25)

Kantner also wrote the epic sci-fi album Blows Against the Empire, imagining a peacenik voyage of happy hippies. No war, no assholes like Johnson (or Trump?) but, as he himself says (on Soiled Dove DVD), “There’ll always be assholes.” Kantner’s dream spaceship is more like “Wooden Ships” than anything approaching verisimilitude. It’s all a dream of stargazing through portholes and lithe-limbed young hipkins gamboling on “A Deck”. Well, Rome wasn’t destroyed in a day (or was it?) 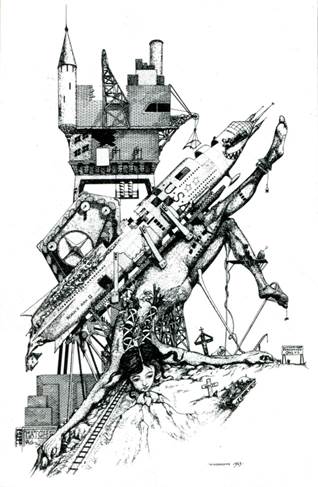 ”Noah’s Ark”, ’63, early student spaceship by Patrick Woodroffe. I suddenly knew that painting could achieve something that no camera could, that for me art was to be a means by which a new world could be revealed, a world seen only within the mind. - Mythopoeikin, page 7 (Dragon’s World, 1976)

So, are all these peacenik types delusional idealists? I don’t think so. Creative artists access their unconscious and that is where a lot of their images and ideas come from. The unconscious is not the ego; it’s not trying to solve the world’s problems. It just has a repertoire of vague memories and yearnings and associations. Desires.

If you want people to be consistent, you may as well take out their unconscious. However, once you do that you have the split ego, self without any appeal to higher truths. What are the higher truths? They relate to the irrational – memory, time, psychology, and thus tragedy. Grace Slick’s “Hyperdrive” is imagining when time was not linear, it was cyclical. That means irrational and by the seasons.

The higher truths, or the mythos, are actually much simpler than linear “facts”. If you take the shape of a tree – say an elm, ash or conifer – it has a rhythm, a balance, symmetry, all products of time. 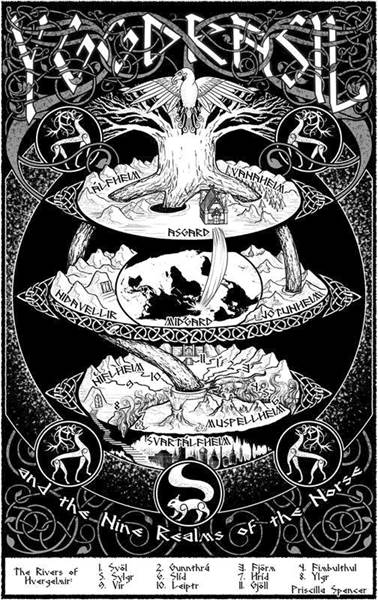 None of that is contained in genetics, which is just a linear flow of information. So, by cutting yourself off from your subconscious imagery, you inhabit a very complex world, a linear world of facts. A fact is just something that has no higher truth; no balance, no symmetry, like the way information is gathered on social-media.

I noticed Kanye West made the comment that Kim Kardashian had a “Renaissance body”. The difference is she uses it for titivation, in a world where you can’t go higher than self. Whether or not all the selves know it on their social-media profiles, they are connected by irrational, subconscious desires. The fact that to them the unconscious isn’t reality doesn’t matter.

In the 60s – and at least as much in the 50s – unconscious reality was much more apparent. The “unthinking” common reality that people used to inhabit (Laurie Lee’s Cider With Rosie takes it back to the 40s). This could be the type of world Slick was imagining in the chapter. A place where there is a palpable sense of oneness. Where this is so, there has to be a drift to the unthinking, unconscious state. This connects the reality to a Dionysian gaiety, a place of quiet revelry. Of imagery that goes to the memory buds. 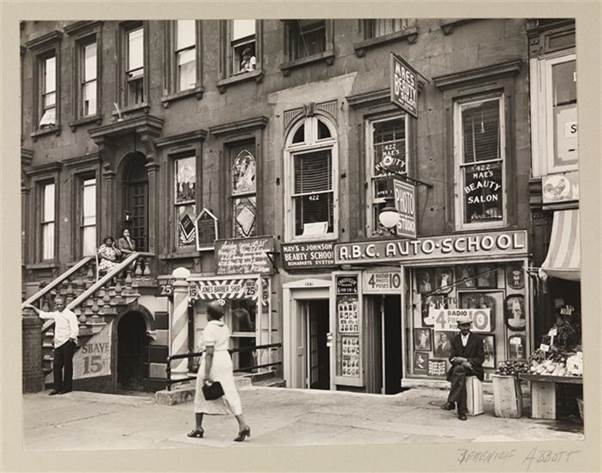 Harlem circa 50s (?) These are depoliticized states, because there is no egocentricty. The image you see relates to the unconscious life of the people. A rough-hewn ambiance. On the DVD of ’72 concert “Liza with a Z”, Minnelli has a nice quote. Decamping from the Lyceum to a neighboring building, they discovered it was a “hooker hotel”. Gazing down from a window at the genteel Lyceum crowds, Minnelli shrieked, “I love it, this is life!”

On social-media egocentricity reigns. Instead of an unconscious oneness, you could imagine the burgeoning of egocentric phantasms, invisible but swirling around, like the sweeping horns of Thoth Amon. The fact that you discount the unconscious doesn’t mean it’s not there, but in this case the unconscious is manifested as a world-devouring ego. You can’t see it, but don’t say I didn’t warn you (to quote Taylor Swift – also on “Out of Control” by Starship!)

So, this is 40s through to 60s, really. Maybe that’s also true of hippy costume, the rough and ready beads and native Indian aesthetic. The 60s was rebelling against linear time, the flow of linear information. Monterey pop festival brought on Ravi Shankar and classical Indian ragas of ancient vintage.

With Jefferson Airplane perhaps that seems to be a hankering after a more innocent plains America, where there was a sense of oneness with the land. Cartoonist R. Crumb has characterized that inimitably. Buffy Sainte-Marie catches the spirit in a lament for her kinfolk, Ke Sakihitin Awasis.

That is what these 60s artists are imagining. It’s simpler but also more real. And that takes us back to comics, which are also part of the 60s mythos. BWS’s treatments of the circular movements of time are legion. “The Enchantment” is even inspired by Cat Stevens “Music”. Any talk of 60s comics, though, has to start with Kirby (as did Smith)..

PREVIEW
Epic, monumental, Apollonian, Dionysian – some themes from the first few chapters. All of these represent the inner life, the Homeric adventurer on the seas of destiny. Epic narratives often form the content of Greek and Roman monuments – fate, quest, voyage.