When an artist is telling a story there is some sort of dynamic tension; they are stressing the anatomy and exaggerating certain forms. Even a technically good artist like Neal Adams stresses and goes for effect.

To me, that is telling the story. It’s the departure from realism and striving for effect. An artist with a deceptively simple style has more content. The tension comes absolutely from style, an artist’s tricks and sleight of hand.

Now, that’s pretty interesting because it means you can have a story that’s full of “facts” but is still quite boring. That would be a linear narrative. Then you can have a lot of tricks and noodling, stressing and effects. That would be an artist’s style for creating a type of tension with the content of the story.

There are fewer “facts”, but it has both style and content. Is there a case for saying there are facts having no stylistic tension? What I mean is a certain type of fact, what you see when you pick-up a newspaper. Actually there’s a Jefferson Starship track “Stairway to Cleveland”; at the end of the track Kantner starts throwing newspapers around and reeling off the latest stock-market, retail shares, oil and war news – a bit like Buffy Sainte-Marie’s “Generation”. It’s clear they both want a simpler world, but the facts seem to be saying they can’t have it.

Enter Rob Liefeld, who has been mercilessly parodied for his stylistic tics. He’s pretty self-taught and might be described as a crazed blend of Kirby and BWS, taken to anatomical heights. He has some of Windsor-Smith’s fiddly linework, and some of Kirby’s infatuation with technology, and it all goes into anatomically generous superhero bric-a-brac filling panels to the point of absurdity. 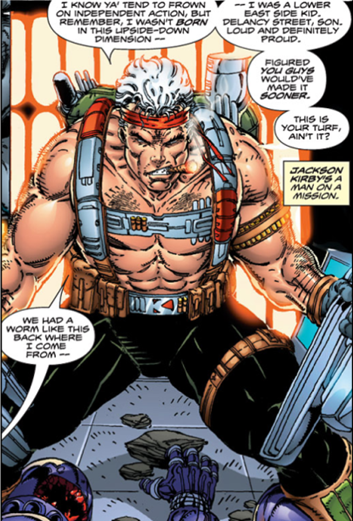 There is something absurd about it, but it has a certain kinship with Kirby’s New Gods which he wrote and drew for DC following the split with Marvel. Splash pages abound – a fault Liefeld shares! There's less purely linear story, you could say, but it really depends; Kirby is always inventing and splashes show you more close-ups of his sort of abstract tecno-universe.

There are some who do not care for Kirby’s portentous dialogue, and clearly he wrote in order to suit what he was drawing. The style therefore has a very strong influence on the content of the story.

Clearly that is the case with Liefeld who, as he says, “Mortal Kombat’ed” the 90s. An interesting thing is that Grant Morrison, who thought it “complete crap” in the 90s, now thinks of it as an “avant-garde abstraction of reality.” It really depends what you call content. Liefeld’s style influences the content, as with Kirby, so the muscularity and dynamism are a large part of the story. What that means is there are fewer “facts” in the linear narrative; your eye is taken up with the set-piece situations. Morrison likens it to a Van Gogh painting – all splashes of delirious shapes and colours.

Whether or not Liefeld's as inventive, his heart's in the right place. There's an abstract quality to the universe they are designing, where it comes from is partly the unconscious; I doubt if Kirby knew exactly what he was drawing, he just invents something that sounds right, like an “acid pod”, and puts it in. Liefeld invented X-character Cable with what you might call “borrowings”; a cyborg eye and a lethal arm. On the comics page, though, the character is a treat. This is a culture of comics that carries on the tradition of stylistic inventiveness in costuming and décor.

Kirby’s writing can seem fantastically overwrought, but it does suit his story of gods in chaos. The story of New Genesis versus Apokolips has a techno-organic quality, so much so that (#9) the underclass – a techno-food forager – acts almost like a microbe in an ecosystem. 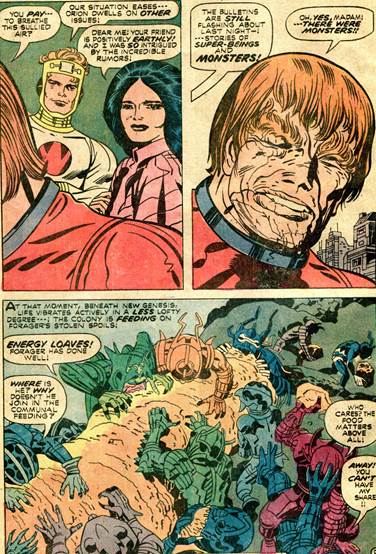 Where you have a techno-culture that is almost organic, it’s true there is a lot of conflict, like germs and antibodies. New Gods is not quite what it seems, though. Forager - the humble techno-functionary – finds himself on the side of the Eternals and must seek out Orion on Earth, himself a New God born of Apokolips.

You can criticize New Gods for being one big fight, but there is an ecological, moral dimension to it. Life on Earth is a fight and Man you could say is driving other species underground. It is a conflict, and if you don’t recognize that you are being blinded by facts.

Kirby’s techno-organic story has a mythos of survival, not of Man but of the entire eco-culture. His gods, like those of yore, are of the earth and sky. 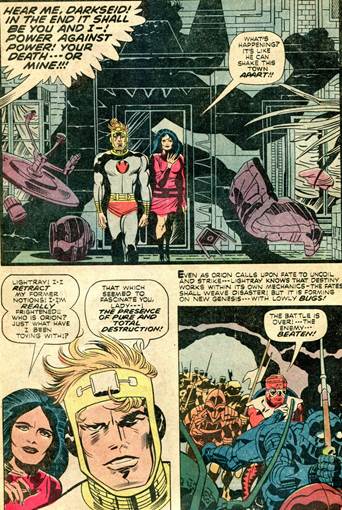 The similarity between New Gods and Liefeld is that, rather than being “one big fight”, they are depictions of interesting techno-cultures. Liefeld’s multi-armaments and suggestive pouches are a story in themselves. That is actually a lot of the content, it’s all action and not fact, so not boring.

From the point of view of a mythos – the survival of a techno-culture, its ecosystem – these books are right. From the same point of view, Mark Millar’ books tend to be wrong. Millar has seen success in The Authority, The Ultimates and has now moved into his own films, with more than a foot in Marvel Studios. How can that possibly be wrong? Well, the point is, this website is about rebellion and what constitutes rebellion. Millar’s work is conventional and normal and, while that may be popular, has no resemblance to the comics of old.

Where traditional (rebellious) comics have action, his have ultra-violence (The Authority) and realism (The Ultimates). For a lot of the reasons already discussed, action is the basis of a mythos, a mixture of style (art) and content (art and story). Instead of a mythos, his comics often have gross-out episodes (Kick Ass). The premise is that normal people would behave like this, but actually normal people would never survive the superhero life. So the humour is based on a false premise.

In terms of art, I also don’t think it operates like a traditional comic where an artist might design spectacular costumes. With the emphasis on realism, there is less fantastical ware. In Jupiter’s Legacy, Quitely mainly draws bodysuits and the guys mostly pulverize eachother, instead of more imaginative situations.

I actually think the  premise of superhero comics is action (Action Comics #1), and the stylistic culture springs from that. There is a mix of style and content in the ecosystem of the stories. The survival of this fantastical ecosystem is at stake, and this is the importance of a mythos.

A mythos is not human-centric; it has to do with a culture and ecosystem of survival. In the 90s Liefeld's crazy aesthetic took hold and spun a dark universe (along with the other Image co-founders). If superhero comics are a type of rebellion, the idea of badass characters fits this quite well. Deadpool was a creation of his spunoff from X-Men, as a sort of glib idiot who knowingly inhabits a comicbook universe, quite a neat way to shore up a culture of fantasy.

The idea of a warrior as badass is completely nothing new. It has to do with survival, with being a bad as the enemy. I think 60s Marvels are that in a restrained way. Thor with his uru hammer is lithe and sexy and fired by his Asgardian heritage to deal as fiercely as he's dealt.

Maybe it’s not Greek drama, but they are honest at confronting the world outside of what has been called “the dominion of fact.” The chief representative of this is the politician, the talking head, the false Apollo, to whom statements of policy are the reality. But a culture cannot be understood is its entirety because there are primitive urges that underly human constructions. Basic appetites, the presence of natural beauty, the hanging gardens of Babylon. As Harlan Ellison has said, in the future there will be no art-deco skyscrapers, and why? Because a culture is something of style and something of content.

There is an original romance here that is dictated by a formidable style. The primitive appears in the unconscious as images, and these are often manifested in the romance of comic books. Orion is loud, unthinking, a hunter giving chase, a noble beast, and Kirby draws with dark, unthinking simplicity. Orion’s nature has a certain noble simplicity because it is connected to forces of destruction, just as nature is. He follows his urges, and one of those is gentleness, an appreciation of natural beauty, the flower in the wilderness. If the dialogue is declamatory, it’s also real and heartfelt. 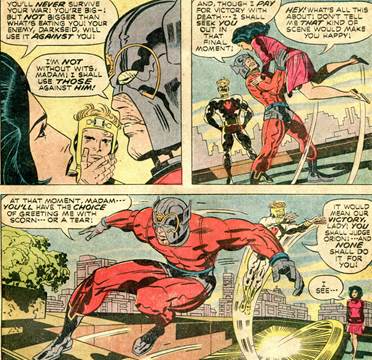 This is the romance that does not concern itself with is a world of “facts” that is all artificial light, the plaything of the policy-makers, the talking heads, the manifesto-makers of the cybersphere. There is a world of the seasons, the hunter, the meadowlands. The world that has no policy, just wildness and grace. 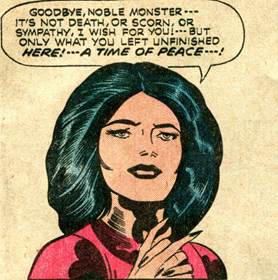