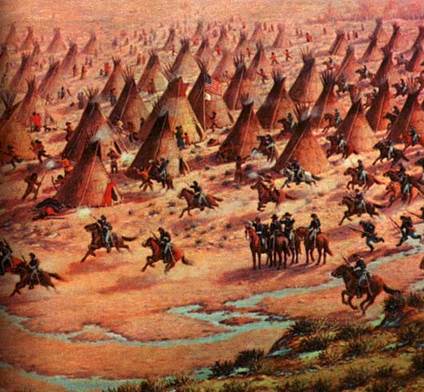 The vison of order epitomised by this large Cheyenne village would probably give Randian maggots like Trump nightmares. The reason for this assumption is that it’s not only order, it’s also disorder; deliberate disarray, casual abandon, rosebuds in the doorway, tethered beast ready for a vaulting warrior..

This sort of order scares the nouveaux parasites of Washington DC because it is self-governing. It has a power. It doesn’t even need money or infrastructure; all it needs is land, and that can be retaken. It’s a warrior ethos, and it applied equally to Indian or settler. One needs the desire, the heart and the basic gumption to retake a territory that is virtually wilderness. There is no “support-system”, nothing for the head to run that the heart doesn’t desire. The warrior is there to secure territory in the interests of the communities; I’ve outlined ways this might be achieved (Metamorphosis Outtake )

This carries the hint of violence against the federal authorities, so several things should be borne in mind:

This is a rebellion against organized state interference in human desires. Desires need certain situations in order to be released. These situations do not exist at present. The situation involves the relationship between the individual and the collective; revivalism (see Happy Trails Outtake for the reference to American Flagg!)

That’s a resume of the “case for revivalism”; there’s no point arguing with a rational state when this is a case for irrational desires. There is no money at stake; there are no goods at stake. There is a desire for wildness and grace and the legend of a lost west. True to legend, the west has to be held by arms; the alternative to that is an organized authoritative state which is what we’re rebelling against.

The aim of the warrior is to secure a wilderness area, so they are disciplined, trained in orienteering and probably guided by Indian scouts. I’ve suggested underground stabling (Alternates 5) so to that extent there is an organization, but its aim is actually irrational, the freeing of desires.

This is a key point of the society, since anyone attracted by the idea of the old west might desire to join in. Now, there is a kiddish element to this, a playful anti-authoritarian attitude. If you can ride a horse, wield a scythe or shoot a hare you can join in. Of course, a lot of people do this in conventional society, but not in the pursuit of actually running a society, only as a leisure pursuit.

The playful elements of a conventional society are more or less made into the central elements of an alternate society. This suggests anarchy, so alongside this goes the sole “political” element; an alliance with Indians who wish to restore their old hunting grounds. This side has to be pretty serious; probably a written constitution or statement of intent. The constitution guarantees protection of any settlement within the new territories. There is no organized government, but there is strict enforcement of territorial integrity – Indian and settler in tandem, the “originals”

The constitution will immediately bring down the federal forces of law and order. We, the rebels, have to state that we are rebels against rational authoritarianism, and are reviving self-governing pioneer-style communities. This frees desires, and the urge to create and nurture settlements inspires an Apollonian vision of order.

That might put them off their Big Macs, but it’s no worse than political mumbo-jumbo. They are essentially trapped in their rational world of fact and figures, so the languages are different ones. Basically, images of the old west are worth bringing into play, as are old films (Sturges). Whatever “they” say this is not about words; it’s a picture or vision of the future (alternate). Granted I’m using words, but it’s taken quite a while to use them irrationally, believe me! The entire mainstream media, left or right, is rational. Politicians of the like of Trudeau or Macron are highly competent; the only problem is they do not see the dark side or the fatalistic aspect of life; the primeval lustiness that is the essence of a community.

This is an alternative to a virtual future run by robots, and its essence is a strong philosophy. It seems to me this starts with children since they are the future, and they tend to think more pictorially than “serious” grown ups (see CH 10, Thierry Laudacieux). Laudacieux’s travels are pictorial – colors and shapes with an organic sense of life. Travel as an adventure is not getting from A to B; it’s experiencing the rhyme of time. It’s good to be disorganized, shambles is better, a nostalgic ambiance.

All this is quite Junto-esque, as French BD tends to hark back to colonial and “pre-modern” times, as with Corto Maltese, which is actually Italian but gained fame in France (Hugo Pratt of Indian Summer.) The world a picture inspires language, and language obviously requires thought. There is ample room for unconscious imagery that fuels the nostalgic sense of ambiance. All this sounds vaguely kid-like, and that’s true since this is the way kids learn to speak, write, think. Harlan Ellison has written of the inculcating effect of comic books.

It’s a question of psychology. You can’t develop a young psychology with words since they can’t understand them. You start with the picture; then come the words, and the internal imagery relates to that whole process. Speaking personally, the imagery of early X-Men, the male/female dynamic, the 60s vibe, the patriarchy and romance are still with me.

Self-governing communities develop in a similar way, so the youthful psychology is strong (a good reference is Laurie Lee’s Cider with Rosie.) The wildness and almost savagery of kids is a sign of a strong psychology. A strong psychology makes a strong community; a playfulness, a lack of rational order. But this is exactly what politicians seek to build; the latest iteration is Trump’s Randian wall, in which maggots will surely grow as night follows day. This is an old theme of idealist builders like le Corbusier, whose cities became nightmares (Dean Motter’s Mr X of Radiant City, Chantal Montellier’s Wonder City). The rational builders make no allowance for the playful or the dark, the two aspects of human existence.

Now, if I can just reference back for a moment, to CH 6 “Style versus Realism”, on style and content in comic books. All that may have seemed a bit like double Dutch; I make no apologies. We live in a world of bright lights and realistic nonsense, which Montellier’s Wonder City captures nicely. 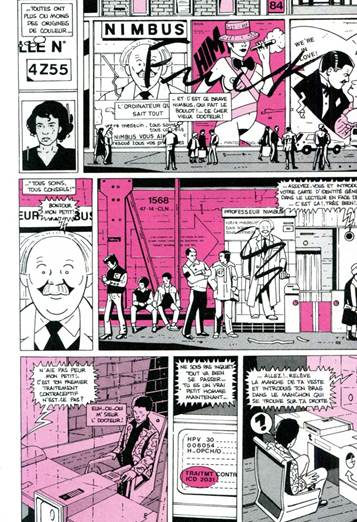 All this adds up to the ritualistic use of language (Alternates 2 If); the meaning of the language is that it’s self-enforcing, a type of tautology. No wonder it’s impossible to argue with the likes of Macron; they live in their world of self-perpetuating order where you keep adding girders to the overall construction. 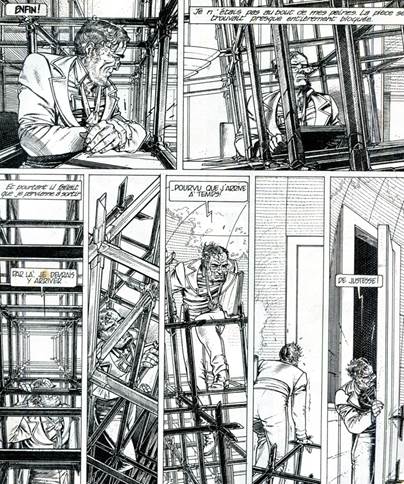 Ancient societies are the total opposite of this. They are playful; even their grandest constructions have a playful, ornamental air.

They are also fatalistic; they live in the cycles of nature. It’s not order in the modern sense of no mess or slapdashery, it’s order in the eco-cultural sense. Nonsuch you can see is a rural institution, a country estate, as all the establishments were in the pre-modern era. Now, there’s a really obvious thing here, which is that in those days people behaved much more like animals. In the knightly institution of castles this is so obvious. Castles were grotty, grimy, dingy, stench-laden decrepitudes. At the same time they were bastions of power and privilege. The very construction of the castle, its walls, its moat, its airy halls, served as a harmonious shelter. Castles were always being cleaned but, like the Forth Bridge, they were never clean. Rushes were spread on the Great Hall, herbs sprinkled. You can imagine there were cows, horses in paddocks much like a ranch.

This is a different type of order to the one we know; it’s not a material order, it’s of the psyche, of the established vision of the age – chivalrous knights and maidens fair. A vision has to incorporate the psyche, which is why castles provided a type of rough harmony; life was pungent in every sense. While castles were the dwellings of knights and their retinues, palaces were a good deal more effete, but still rough as we understand it, courtiers even carried their belongings as the halls were barely furnished. 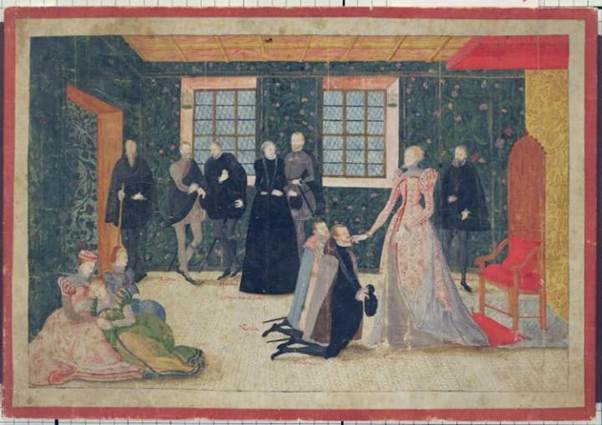 This is what a non-rational order is all about; it’s playful but also fatalistic and bound to cycles of birth, death, regeneration (the king is dead). Elizabethan airs are sort of melancholy, you could say, yet seem to uplift the spirits in some weird way.

The idea of order “we” have is quite different to the ancient one. Order was not logic, it was more to do with a type of harmonious living, even if that included dirt, smell, dark airy halls and so forth. You could say it’s the exact opposite to the gold filigree’d Trump Towers! The order of those days impacted on the senses, like the perfumes and wanton breezes of a twilight grove. It related to urge and desire, so it was much more Dionysian. You may have seen old films with Wild West music-halls where a couple of flirters are seen to close a drape so they can get together. The same applied to Italian opera. Lusts were given room for manoeuvre.

There’s something seedy about this, and that’s exactly right. I wrote in Alternates 5 about the old neighbourhoods of New York that were on one hand very genteel, and on the other rough and seedy (see Liza Minnelli quote in SongCycle).

There are two things going on. There’s the Apollonian vision of order that you see in fabulous architecture; whether New York brownstone tenements or Tudor palaces. The other is the Dionysian urge. The order is never what is reality; it’s an aspiration. Moderns make the crass mistake of thinking order is reality, and therefore it has no psychological basis (I’m looking at you Amazon Spheres).

The psychological basis of society is untidy and, like the cowhand in Conagher (Happy Trails Outtake), filth and raggedness are appreciated, have an attraction.