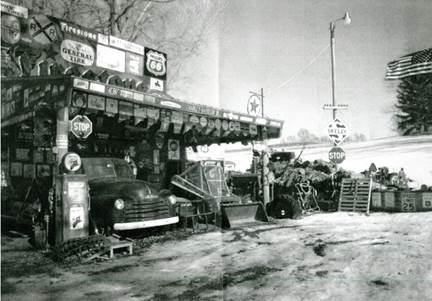 The American ideal is the idea of a place that has no hand of government in it, it just happens. This photo to me reeks of Americana with its emblems, a ragtaggle showcase of corporate logos, a veritable shambles with a vaguely rustic appearance. You can just imagine Dogpatch round the bend of the sloway (Lil Abner). It’s the same America you see in Smallville (Superman), anyplace USA where the American Dream is reflected.

A dream is a type of unreality, it relates to human visions and urges – Apollo and Dionysus – so there is a dark side to that dream. Historically that is undeniable 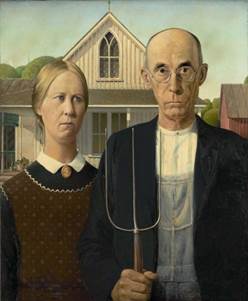 Unreality is iconographic reality because it relates to the interior life. There is a balance there. I’m talking about the iconography of America – I think that was the subject of American Gods by Neil Gaiman, never finished the sucker! It’s basically where comic books find their home (as Grant Morrison says in Supergods, Superman is Apollonian vision, Batman is Dionysus, the moonlit urge for vengeance). Comics capture the unreal reality that is America because there is always a balance between the interior life – dream, imagery – and the visible world.

From Dogpatch USA we’ll take a quick detour to Washington DC, and we see that Trump & Co have no conception of this iconographic inner life. Bannon, chief advisor, is an authoritarian nationalist who speaks of “taking the country back.” I’m fairly conservative, not liberal atall, but Bannon & Co are the new Washington establishment. They don’t own “anyplace USA” anymore than I do.

What they can do is what any government can; replace the interior life with a deluge of facts and figures. They have zero awareness of the natural eco-culture of America, from Texas steers on the west to the Great Lakes and meat-packing yards on the east coast.

Now, you can say “that’s history.” Not really; things go in cycles. They’re already reintroducing bison on the Canadian border, and these will quickly re-establish a prairie ecosystem of plenitude, given enough free-roaming. Where you have bison (or the feathers of an eagle) you already have a meta-culture that is not confined to a rational image of human-centric policies. You have an interior life that feeds off dreamlike images of the unconscious, desires and urges.

That is what a meta-culture is. It’s not human-centric, egotistical nor even completely real. There is a dose of unreality, a dream life. Whoever inhabits Washington DC is irrelevant to that type of image. They’re not rebels however they style themselves as outsiders. The idealism I’m talking about would never get to them because they have no interest in herds on free-roaming prairies. They have no interest in eco-culture and therefore nothing meta or iconic in American culture 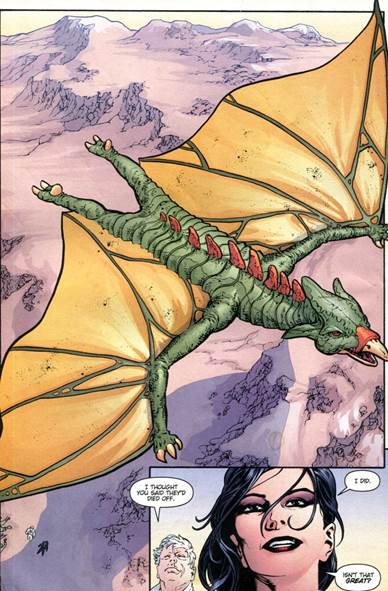 Planetary is what you would call total fantasy as it tells the hidden pulp history of the world. We hear about the revival of 30s hero Doc Brass (Doc Savage); a living spaceship from the Jurassic that needs love and affection; a Japanese island of interdimensional monsters; a rapacious global conspiracy called Artemis that rivalled and surpassed the Apollo moonshots.

It’s pretty weird stuff. It doesn’t pretend that things are happy-clappy in the real world, or the dream world. There’s a darkness there, battles to be fought. That is almost the premise of superhero comics. They fight for a dream, and a dream is not reality, it’s an interior world of visons and urges, reflecting the dark side of life.

The iconic example is the cowboy, the settlement of the West, Indian wars and all of that. A dream is not pretence; as Joni Mitchell’s lyric goes, “We are billion year old carbon.” The suspicion is that Washington – viewed as an institution – is out of touch with the eco-culture that actually is a large part of the American story. The new guy may be anti-globalism, but is still in a happy-clappy mode that everything can be “great”. Everything isn’t great. Everyone doesn’t want plastic environments that are blended into one homogenous mass. Everything isn’t about numbers, the growth rate of GDP, because underlying everything is an eco-culture that is being eroded.

The American Dream is not just a culture but a meta-culture of mountains, forests, wild rolling plains. Connecting to this is reinvigorating. Mother Earth reinvigorates the soul and, through her natural cycles, regenerates what is dead. Such cycles make possible ways of life which are iconic, hitherto deemed uneconomic. A fairy tale of Americana? Sure, because idealism is not a political question; to pretend otherwise is an existential threat. A dream is not pretence; it represents an inner life of unconscious imagery, urgings such as the call of the city to a Kansas dogsbody (not Toto).

Liza Minnelli represents the authentic old New York with its lights, drama, action, not the “real” NY of bankers and bureaucrats. The authentic dream that is part of the American dream that has an eco-culture spreading from sea to sea. It’s not human-centric but has a meta-imagery of wild horses, bulls and rodeo, corn belts and dirt tracks.. and Toto.

Artists feed off this imagery, and the great forms of old cityscapes also feed unconscious imagery. The art-deco 20s skyscrapers, the New York Gothic home of Batman. Natural forms have influenced architecture since time immemorial and the Bleeker street of Sullivan is the authentic city. Meta-imagery is the setting of the great American musical. Minnelli’s routine has the playful skittishness of Singin’ In the Rain. Actually, the Fox film of Daredevil has something very similar to street dancing in the “pas de duel” between Murdoch and Elektra.

Daredevil is replete with iconic imagery, from the gothic sky-cross of the opening scene to his blood red suit. There’s an existential question here because meta-imagery is not lightweight; it deals in death and regeneration, organic growth, totems (gargoyles). What is “great” is the light touch performers have in this type of scene. Life is not all great in The Wizard of Oz, but it is a place and a home and in the end that’s all that counts.