In BWS’s bawdyYoung Gods, the bureaucratic gods of filing have deprived the old gods of their doom-mongering powers, the omens and portents are as naught. The carnality of this realm seems to go against the logical routines of modernity. 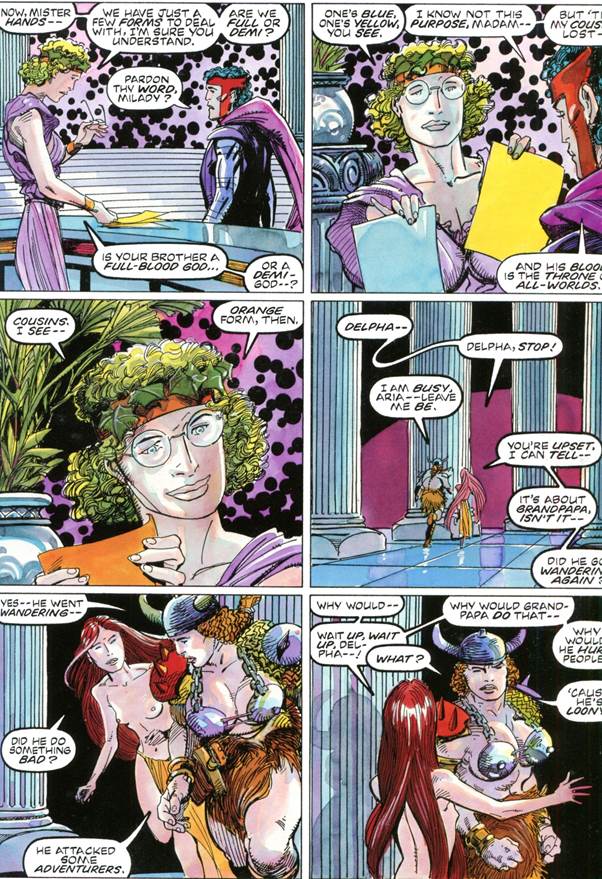 Another way to put it is that filing is another facet of perspective, since it is a linear system in space, computers being the most obvious beneficiaries (electromagnetism). The perspective view of the universe is what you could call relative, since everything is relative to the sun.

OK, now here’s a question: doesn’t that make the sun absolute? In other words, Relativity is a consequence of a heliocentric system. But the sun is only order, not balance or proportion. If you assume the invisible –Platonic – truths are balance and proportion, then there is another type of relativity.

Anything to do with omens and portents again relates to relative size and distance of planets and stars to earth. Hence, we have constellations (figures in space). 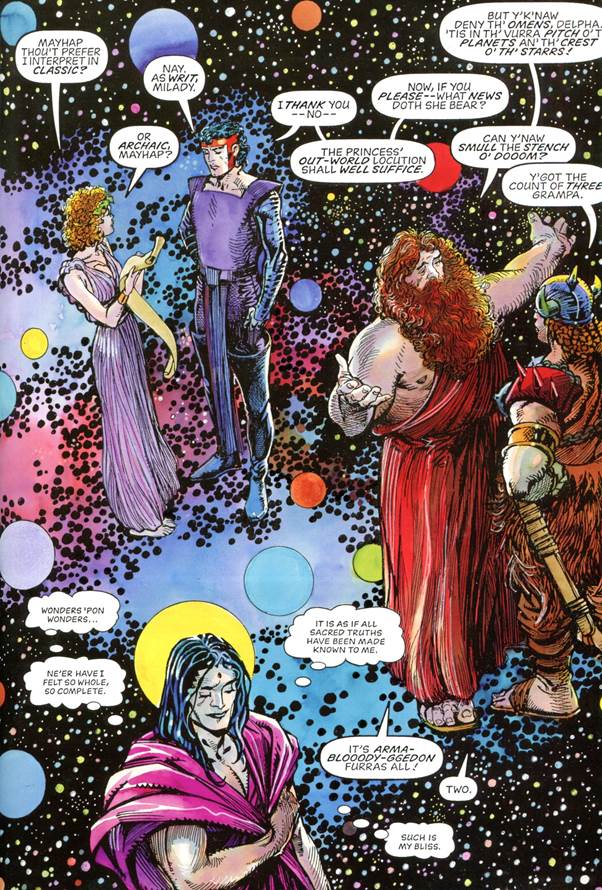 So, it’s because perspective makes the sun an absolute of order that we live in the so-called Relativity or electromagnetic universe. Without perspective, the absolutes are proportion and balance, the invisible truths. It’s because perspective is so convincing a reality that it is deemed to be true, even though it is simply order, and not human physique or psyche.

With physique comes bawdiness, and hence combination or proportion of low (rustic) comedy with high (tragic) drama. BWS’s unfinished yarn – usually through the hip-speak of Adastra – is awash with such contrasts.

If bawdiness is what is lacking in the modern world, then it seems one can interpret BWS’s yarn in the above manner. I’m not saying this was his overt intention, but fantasy artists often have an intuitive sense of a cosmic order – or disorder.

BWS – unlike Grant Morrison or Alan Moore Hyborian Bridge 4 – has no pseudo-science, only what he calls Modernity, which is basically all the routines that classify things (Alan Moore’s essay “Blood from the Shoulder of Pallas” is on exactly that theme Hyborian Bridge 15).

All these artists seem to be struggling with the oddness of modernity but, at the same time tend to be too trusting of the “truths” of science. Because Young Gods is bawdy and cosmic it has much more to say on reality than would, say, his apparently abandoned Monsters (on Nazi DNA).

Yes, I’m always suspicious of pseudo-science since I happen to be trained (Tales of Faith 5) and know about acid-base/salt-metal, knowledge that is part of our empirical traditions and not merely reason (like Fulling also Hyborian Bridge 60)

A perspective order is basically boring because, let’s face it, perspective is boring! There’s Musk’s Boring Company (“speed”) and now I see there are companies with their eyes on lunar mining. You might ask, what’s wrong with mining the moon or asteroids? For answer, BWS has Heros riding comets, a feat which has Adastra “moistening up”. The material view of things misses out on physique and psyche, when these are actually what give life meaning.

Whatever the extraterrestrial ambitions of Bezos and Musk, they are all a product of perspective – the solar dragon – and not of proportion seen from Earth. Pulp artists, and particularly BWS, are obviously not convinced that that view is the correct one, and the reason is to be found in the human figure.

Without proportion, one is left with a material universe of “facts”, which are assumed not to be bawdy, even when it’s blatantly obvious (Katie Bouman Hyborian Bridge 56). Why is that assumption made? Because the heliocentric view is the perspective view, not the proportionate view from Earth that has sun and moon as twins (see Artemis and Apollo).

The proportionate view is physical, our physical sense of the universe. Everything else is illusory (seen through lenses). The acolytes of lenses have a very convincing view, because that’s what perspective is, but it’s not physically real, bawdy and lusty.

Therefore it is not psychically real either. Both these elements are intertwined and almost cannot be separated. If you look at BWS’ “Artemis and Apollo” (Tales of Faith 9) there is an overwhelming sense of psychic decadence in the languid figures and associated objets d’art.

The strength of decadence is being abandoned by the patron saints of hygienic materialism, Musk, Bezos and Gates (Hyborian Bridge 36). To be physical is to be proportionate and therefore Earthbound. This is the living planet; Mars is the dead planet.

As I tend to say, all they are doing is exporting the solar serpent and its disproportionate physique and psyche. The head and not the body. This is what “they”, acolytes of the smart planet and Amazon House, have prayed for and lo, it has come to pass.

Not quite! The spirit of Weird Tales still lives in princely brawn and low bawdy ways – the sword and sorcery way.