The age of fact is also the age of doubt (see Kierkegaard, prev) since the scientist always has to doubt until there is verifiable proof. The one thing that can conquer doubt is primeval reality, which is to say the absolute of the sky at night rather than the relativity of the sun (logical perspective).

The one is unprovable but has psychic power; the other is provable but has no narrative content (ie like a reflection). It also has no physical substance or proportion (style). The one thing it has is convincing facts which – for reasons already stated – are also fiction. The illusory world of CERN or intensive beef lots is a product of the head, not the proportionate physique (cowboy).

The New Atlantis, which starts with abstract thought, inevitably leads, through empirical reason, to facts of the electromagnetic reality (sun). The facts are also fiction because they are disproportionate with an absence of psyche. Empirical reason implies the universe is factual, and that may be true of a relative universe. But it’s not true for the absolute world of primitive action, where psyche is expressed through the manners of animals. This universe has physical substance (physiology) related to Earth (Gaia).

Howard often treats his characters almost like animals in their primitive passions. There is almost no speech that does not have its associated action, swift and decisive. In Howard’s universe everything is action, and the action is often red with blood or lust. One of his best tales, The Grey God Passes, was a rewrite of The Battle of Clontarf in the guise of historical fantasy and the highly wrought characters stride through the halls of a barbaric castle with the magic realism of a Borges. 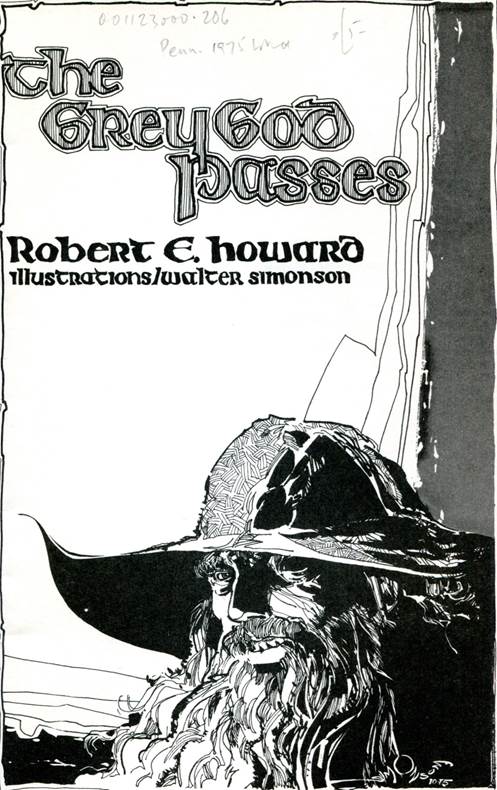 She clenched her white hands in savage exultation. “Bring me his head! I’ll hang it above our bridal bed.”

“I have heard strange tales,” said Brodir soberly. “Sigurd has boasted in his cups.”

Kormlada stared and scanned the inscrutable countenance. Again she felt a quiver of fear as she gazed at the sombre Viking..

“So!” The Viking tossed her contemptuously on to a pile of silken cushions, where she lay whimpering and dishevelled… “The throne of Ireland is a small thing beside my desire for you – if I cannot have you, no one shall.”

Howard’s version of Christianity (HYBORIAN Bridge 52) is in many ways as brutal as the barbarian savages facing it. A woman like Kormlada, half Dane half Irish, is in many ways an ideal vision of blood and destiny that shaped kingdoms in the primeval past. There are many similarities between Kormlada and Helen of Troy, both mixing their heritage in a red haze of treachery, both present on the losing side of an epochal battle.

This scene of Helen bathing like a horse in a stable is my favorite from the film as it seems to come straight out of the Iliad, rather than from Euripides’ play on which the film is based. A hell of a lot of the Iliad is down to style – narrative devices employed that give a type of rote or formula to what were probably originally orally-transmitted poems, allowing the bard the freedom of extempore.

While there’s no doubt the Iliad depicts actual events, there are also invented scenes (such as hot and cold springs by Troy that have never been found). This is quite reminiscent of Howard’s historical adventures, whereby the style is overwrought and atmospheric, while the psyche of the heroes and heroines is wild and reckless almost to a fault

In the ancient world, as in Howard, style (poetic devices) and psyche (narrative content) are the main values. In a heroic situation heroes die, and the truth is related to the lifecycle of the hero/heroine. In that situation of life/death, poetic style and psychic strength are the truths, the world is a much wilder place and the civilized Man is less distinct from the animal.

There is decadence and dirt; Helen’s bathing scene is very true to that mix of dirt and cleanliness, the life of decadence that has no knowledge of hygiene and lives with the lusty abandon of animals (Dionysus).

Decadence is a type of lifestyle that is not completely ordered, that allows in the scent of death which is just the normal cycle of existence. This is denied by “them” and hence we live in a poisonous effluvium of facts that are fictions. I read this on pharmacology rebel Rose-Marie Swift. Cosmetics is another fantastic fantasyland and, as Swift says, the conglomerates are scared of germs, and their hygienic method

kills the ingredients. At worst it makes them toxic. And it’s totally unnecessary. High quality oils naturally have a long shelf-life. What’s the primary ingredient in hand-sanitiser? Paranoia.

This stuff is doing invisible damage. It’s disrupting our endocrine systems (hormones).. He told me the cosmetic industry is destroying women’s cells. That’s when I knew I was doing the right thing. (DT)

The inhuman dollar is the thing that denies animal living because it is the sign of pure order. Like the “electric green” town of Babcock Ranch (Tales of Faith 2) Trump’s new “Opportunity Zones” make of genteel decay nouveau industrial estates. Compare this picture of a Buenos Aires Gaucho eatery – is it not the very picture of Olde Americana? 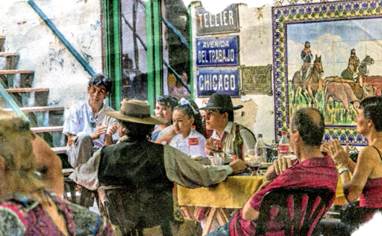 The poetic atmosphere and narrative content of the scene is enticing. Latins tend to have a languid or even fatalistic sense of time passing that used to be true of rural America, the very opposite of Utopian federal funding presaged by “O-Zones”.

To take a counter-example, how about Detroit? As most people are aware, the city has been in an advanced state of decline for decades with thousands of abandoned buildings, urban prairie reclaiming downtown districts and the violent, drug-laced history.

However, one thing that never happened was federal bulldozing of Civil Rights legislation; there was never the forced busing of schoolkids as happened in other cities. This had the effect of entrenching inner-city poverty for sure, and only since about 2010 have private funds started to return (tramways and an urban farm).

Whereas the almighty dollar will remake things in its Utopian image, Detroit has kept its poetic atmosphere (style) and narrative content, and you can guess Martha (of the Vandelas) probably still lives in the same neighbourhood!

As funding has returned to the Mid-Town some have complained of political infiltration, which sorta makes my case. However, the most fantastically successful funding is by non-profit philanthropic bodies where money has been ploughed into schools, riverfront et al. 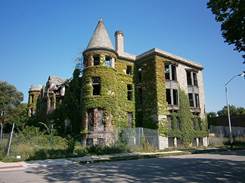 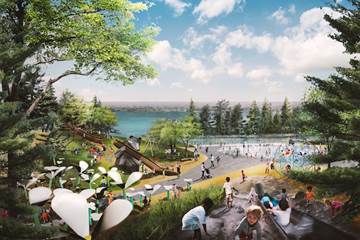 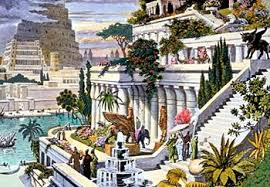 This is a case of a city which has been demographically left to its own devices and yes, it’s poor, but its distinctive character or “thingness” (Tales of Faith 10) is unchanged. This is largely owing to decline – or decadence – being allowed to go its own way. Atmospheric relics are everywhere.

It’s not that I have anything against the dollar per se, only the Utopian federal dollar that stamps its mark of authority, flattening any distinctive attributes, ethnic or otherwise (Pictorial 9)

America is not the dollar because that is just a financial order. America, as I tend to say, is a lifecycle from golden west coast to dog-eared east, from cowboys on the range to Hudson bay trawlermen. Yes, I know it’s old hat but that’s partly because the almighty dollar has said so. Cities also have lifecycles, they have their dog-eared districts, their sleaze. It’s the poetry and decadence that O-Zones and their ilk will crush into one Utopian mass.