When “they” say that hygiene is resource friendly, what they really mean is there is no physical substance. The behaviour of animals relates them to their physiology, whether it’s cows munching hay tranquilly, pigs rooting in rough terrain or horses moping in the paddock till the cowboy leaps into the saddle (yeehawing).

The one thing animals have is manner, because it is what they are. Their manner of moving around and eating relates to their physiology. A traditional mixed farm therefore has narrative content (psyche) and physique (proportion). Now, what “they” say is, “Who needs manner on a farm?” The answer is that the psyche is strong; this is what the animals are meant to do and they do it well. They are not inert commodities because that is weak.

The earth, or the texture of a clod, is a source of strength that is related to animal behaviour. So what “they” mean is that the earth should be weak, that it is sufficient to have compounds that support animals intensively.

It’s not sufficient because the physiology of an animal is its active nature, and therefore motivated by its psyche. They’re two sides of the same coin, in the primitive world of action. Action that is dramatic and meaningful. Animals lend themselves to drama and gaiety – in a world of primitive action (the West, the prairie, the myth of the Alamo..) 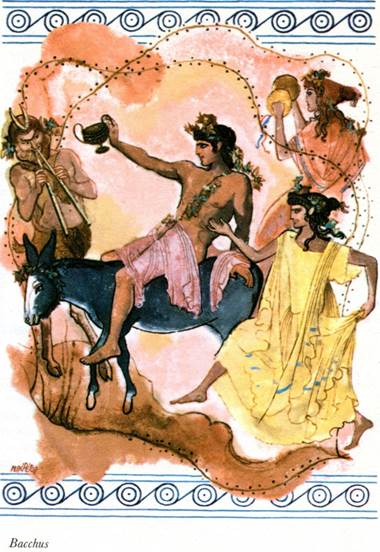 Greek drama, according to Nietzsche, originated with Dionysus, which is just the animal nature of Man. Narrative content is what happens when animals roam because it’s the action of the psyche on the physique.

Instead of psyche and physical substance through action, intensive lots breed psychic and physical weakness through inaction. They rationalise it with hygiene, so it is just one more hygiene-machine to add to the rest of the electromagnetic universe (of illusion or reflection). It’s a lie but, because illusions (sun) are very convincing, the lie sits unexposed as the hygiene-machine kicks-in.

If you go back to the 1st part of this 3-parter, what I say is that tragedy is exposed when the truth comes out. This happens in Electra when she tells Clytemnestra she has given birth and wants her to say a votive blessing. Instead of an infant, she goes inside the house to meet her fate in the shape of Orestes.

Because modern Man denies psyche, or narrative content, he lives like a ghost in the machine. This is where it pays to go back to the pulpsters, especially the grimly fatalistic Howard. Death is a strong presence in the Hyborian tales, and the psychic destiny of the hero is foretold and becomes legendary.

What I asked in Tales of Faith (Chroniques du Sable) was, “In a world of belief is the legend stronger than the death?” Modern secular Man has no conception of death other than as non-existence because there is no belief in psyche. The strong psyche has a destiny that may meet with legend. Psyche is our relation to the universe and, because there is no proof of its existence, moderns deem it a product of something else (such as evolution).

Empirical reason demands proof, which is its Achilles’ heel. Something that can be proved is a verifiable fact, therefore we exist in a world of facts (that are also fictions.) The things which cannot be proved are style (proportion) and content (psychic narrative).

If you go back to The New Atlantis (Hyborian Bridge 22) abstract thought is applied to empirical reason to produce “facts”; but if, as I said previously, the mind is electrochemical impulses, these facts are (by a devious route) products of the sun (electricity, light). The facts are not proportionate (style) and not the product of physical substance. For this you need to invoke the moon, and then you are in the absolute reality of sun and moon (proportionate).

Psyche – or the narrative content of the stars –is applied to physique, and this is the way of the warrior, the huntsman, of Artemis, of Diana and her hounds. This way is strong but it is not provable because you’re no longer in a relative universe of the sun (logical perspective, “speed” Pictorial 43)

On the other hand, provable facts are also fictions lacking proportion (style) and content (psyche). This is why we live in an illusory world which is very convincing. Absolutes, such as style or content or the sky at night are unprovable. They are strong and that is all you need; we live in a world of weakness, and that is the lie. When the lie is exposed we have tragedy as we will then be back in the world of blood and destiny.

On that note, we re-enter Howard’s historical adventures..