Most people will have heard of James Lovelock’s “Gaia” hypothesis whereby Earth achieves chemical homeostasis via energetic atmospheric and marine feedback loops. According to this positive feedback could hypothetically destabilise Gaian mechanisms, which is where we are today.

These energy fluxes, however massive, pale into insignificance beside Earth’s rotation and orbit, which pull us into the domains of sun and moon. Equinoxes and solstices are primitive powers that are massively meaningful to ancient Man, bookending agricultural cycles, festivals, feasts.

It strikes me that nowhere in Lovelock’s book does it mention that the Earth rotates! In other words, he’s not thinking of ancient cycles of cosmic power (which give us proportion in the universe). But, the fact is the Earth isn’t simply a cybernetic mechanism that self-regulates (zzz), it’s a cosmic powerhouse that turns its face to sun and to moon.

If you miss out that ingredient you have a chemical system but not a cosmic one. Yes, it’s true the Earth and Man and animals and plants are chemical systems, but they are also proportionate and highly symmetrical. The symmetry of sun, earth, moon is a cosmic symbolism resonant with meaning and power.

This is the primitive world of action where Man is not an exporter of chemicals but a hunter through night-dark forests. In other words, the scientific language of Gaia actually degrades the meaning and power of living. I’m not saying it’s deliberate but that there is a primitive world of action and power that the scientific community tends to ignore, in their towers of the mind.

Gaia is a cybernetic organism that elicits certain facts relating to homeostasis, but that’s not what the Earth IS - it’s a symbol just as some might say Mars, Venus and the other planets are. These questions of symbol, meaning and power are not where science is coming from as it comes from logical thinking.

Gaian homeostasis obviously means “balance” (equilibrium) but neglects to state that Earth is balanced between sun and moon in its orbit. This cosmic balance is not only more powerful (than the chemical cycle) but relates to Man’s behaviour as a hunter.

You know the way in old Westerns the cowboy sidles along, hips swaying almost like a proto-Elvis? The physical grace has a purpose, the loose-limbed gait enabling a swift draw (though I guess also a psyching-out of potential opposition).

These rhythmic tropes of action are equally apparent in Nyoka. Leaping onto saddles, acrobatic battles, aerial vine-somersaulting, the to-and-fro movement of elephant-riding. Add to both the fetishistic aspect of costumes that accentuate the body and give it free movement.

So, in a primitive world of action the sexual symbolism of the body is completely standard (the same applied to Jane Austen, trust me). You’d have to go back to the lost Empire of Austro-Hungary in the Cold War capitals of eastern Europe to get a similar ostentatious sleaze.

What we are led to believe in a world of business suits is that mind and body are two different, separate things; that there is no physically sexual reality that has a psychic value. In the primitive or ancient world, the exact opposite is the case. From Cleopatra of the Nile to Augustan statues they are fetishistic and sexually alluring figures.

Roman emperors also had a tendency to align themselves with planets or gods. The physical allure was obviously strongly connected to their psyche and behaviour (see Hyborian Bridge 14). This is actually the opposite of our system, where the facts of a logical order replace behaviour of human (and animals, natch.) We tend to think that’s fine as we are all heirs of The New Atlantis (Tales of Faith 10) or empirical reason.

As I suggested before, though, Bacon foresaw that a certain type of mentality might dominate (The Idol of the Den Hyborian Bridge 22). The assumption of The New Atlantis is that head and body are completely differentiated, and the logical conclusion to that road is that we (or “they”) change nature and human nature to fit the end - rule by AI or a parallel reality of sameness.

What you could say, then, is that earth has become inert through the operation of empirical science which favours a certain type of head (The Idol of the Den). It’s electromagnetic intelligence (AI) that faces the sun (illusion or reflection) and the illusion convinces as fact becomes fiction (sun).

At the same time, the physical reality of the body – man or animal – is overtaken by hygiene-machines, such as intensive US beef lots (prev.) or the Amazon House of voice-activated smart-utensils (shades of Zappa). Again, this is electromagnetic intelligence or the cold-blooded serpent with a human head (Conan #7) and not the proportionate head and the active body – as in free range grazing of herds on hay, which suits their natural physiology.

So the inhuman behaviour of modernity is – or soon will be – run by psychotic AI. It’s inevitable as algorithms are “smart” and so we enter the world of the smart illusion, where the lie has become the truth as it’s very convincing (to the head or perspective reality).

The lie has no physical substance of action, of beasts in the field, of animal behaviour (psyche) that is related to their physiology (physique); pigs that plough-up as they forage for tubers; cows that low in the gloaming as they graze on hay; horses that mope as the sun goes down on the paddock as they stroll to a comforting bit of straw in the stable. Last but not least the omnivorous goat (see).

The lie of intensive agriculture is that the psyche (content) has no connection to the physiology (physique), that there is no narrative content of physical substance, that everything can be dealt with hygienically (by AI).

Lies breed tragedy because when the lie is exposed so is the tragedy. In the film of Iphigenia (Michael Cacoyannis 1977) the lull in the weather strands the fleet on the shores of Aulis and Agamemnon consults the Oracle who tells him the winds will rise if he sacrifices his eldest daughter to Artemis.

He concocts a ruse to bring her here with her marriage to Achilles, then later changes his mind and sends a messenger to take them back to Argos, but the messenger is waylaid. Finally, Clytemnestra is apprised of the truth and the dam bursts.

In the 2nd film, Electra, set years later, Electra and Orestes obsess about the need for revenge on Clytemnestra for killing Agamemnon (for the sacrifice of Iphigenia). Even though Clytemnestra pleads her case with power and eloquence they commit and deed, and repent at leisure.

The truth is never simple. Agamemnon does his best for the army but they are thirsty for blood and his hand is forced by fate. In the modern world we don’t believe in fate, but neither do we believe in death, just “non existence.”

Yet death is a return to nature and the strength of nature – physical and psychic. The truth is modern Man modern Man doesn’t believe in psyche when ancient Man did. Iphigenia’s speech on her ceremonial “marriage to death” is something else.

There are different ways to look at things. The universe is full of electromagnetic impulses but that’s not what it IS. Constellations of stars have symbolic meaning so are psychic as opposed to physical. Is that the narrative content of the universe?

Your guess is as good as mine, but the point is they’re not lies. If you live in a universe of lies (which is very convincing) that’s not a tragedy. A tragedy is when the truth is revealed, and blood flows. Then catharsis follows. We are cut-off from tragedy and from the blood that courses through our veins. We are entering a parallel reality of sameness run by (psychotic) AI (algorithms).

I think this is where the pulpsters come in because the allure of blood is very powerful. Blood ties us to our animal natures, the lusts that flesh is heir to, and keeps us proportionate in our physiques. I always wonder where dachshunds and mastiffs get their physiques, and I think it’s just a type of perfection that takes place in time– the psychic universe of absolute time that we see in the sky at night.

This universe – as I’ve been at pains to point out – isn’t electromagnetic. It’s psychic (stars), physical (moon), both ethereal and lusty. It’s Artemis the huntress and the bloody fantasy of Howard’s Hyboria. With physical substance comes proportion (style) and with psyche comes narrative content. Without style and content we are ghosts in the machine run by acolytes of the supreme sorcerer (or AI). 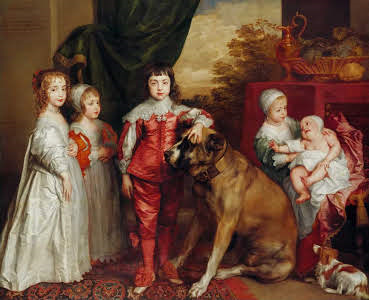 Van Dyck, The Five Children of Charles I