The Alamo fits a mythical place of power (ontology) with figures-in-action (meaning, epistemology) –Pictorial 8- but there is a mystery attached to it. The mystery seems to be comprised of individual, commune and landscape – the three components that comprise the films of Ford, and in this case Wayne, his protégé.

The mystery is primitive and strong and of the body. If you want to call it reactionary, go ahead! The situation is premised on physique and skill of wilderness men brought together by the discipline of Travis. The event is 188 years gone, while the film is about 60 years gone; to get an idea of how things stand today here are two quotes

A man can decide to be female, take hormones if required.. win everything and perhaps earn a small fortune, and then reverse his decision and go back to making babies, It’s insane and cheating.” Martina Navratilova

The guy just came over and grabbed! That man was very strong. I wasn’t kissing him. He was kissing me.” Greta Friedman of “the kiss” 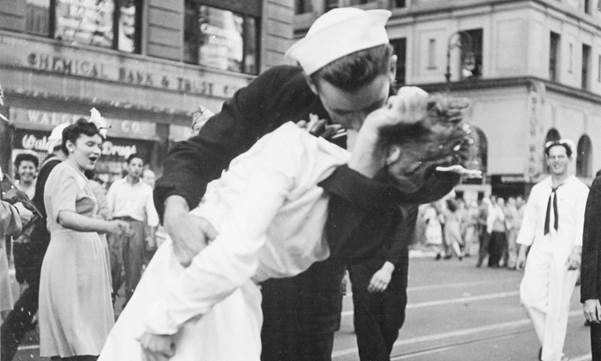 Martina was stating a truism of physique and so got blown away by social-media. Greta was probably saying what she was “supposed” to. The world of physique is very different to the one of serpentine trivia directed at the head; there’s a limit to the amount you can intellectualize. I was listening to these French intellectuals on French radio discussing Gilets et jaunes and algorithmic decision-making and suddenly thought, “throw them to the lions!”

It would definitely settle the argument in favour of the lions (physique.) All “facts” which are not physical have this type of trivial abnormality. I’m not blaming French intellectuals – they’re no worse than others – but the fact that serpentine trivia of the head are by definition counter-reactionary.

Reactionary attitudes are of physique and psyche, whether it’s having dirty vegetables that aren’t machine-washed and have wholesome bacteria, the tradition of hunting, hounds etc. You’re no longer in the world of hygiene (Hyborian Bridge 46). You’re in the world of meaning and power (Hybroina Bridge 47), dirt and cleanliness, hoeing the fields, harvest festival, harvest moon.

The proportionate body that is active in the woods and prairies. If you can say that a world of physical substance has style (proportion), content (psyche and introspection), meaning, power and the continuity of lifecycles, what does that leave to a world of the head? It leaves the trivia of psychotic AI and convincing facts.

If you think about it, what is the biggest global industry? The recycling of trivia via psychotic AI (algorithms), all of which is convincing. The relative world that is a reflection of Faraday’s phallic solenoid (electromagnetism).

It’s convincing because it’s basically static and staring at the sun (reflection). The Earth rotates, facing first one way then the other, and is thereby exposed to paradox. This is not resolvable space (or parallel reality). We voyage through the universe “into the day and through the night”.

The mystery of things is often akin to this paradoxical nature. I read a review of a book by a French intellectual on how 80% of Vatican priests are gay but are determined to stay in the closet and block liberal reforms! So they really are hypocrites; but (see Puritan settlements Alternates 7) hypocrisy tends to put lust at the forefront of morality.

Christianity itself is so susceptible to hypocrisy; if you take the theme of the Jefferson song Son of Jesus (Hyborian Bridge 48) the Mary Magdalene affair would cast a blemish even on the Saviour!

What we are told by “them” is that we live in the world of the living; it’s convincing enough, but misses out the fact that we die and are then in the world of the dead. The first world is illusory; the second is strong. The ultimate fact is “the sun is the sun”; it’s so convincing we forget that the Earth rotates, so that the fact of death has Earth meaning and Earth power, a physical reality that ancient feet have trod.

This is just the other side of the coin to faerie and pixie; it’s not a factual reality but one of physical substance. Even the fruity reek of a freshly killed rabbit is enough to turn a modern stomach.

Things decay and facades fade and that is a type of living with the raven of the night. It’s the reality that the almighty wormdollar tries to consign to the history books, the one of strength and a type of paradoxical robustness and gaiety.

Why is it that Havana’s crumbling facades and US oldmobiles make one think of America in the “good old days”? Because the state of genteel decadence is exactly the state that exists when people are self-governing and far from the power of the state, the American way that the almighty dollar has swept aside in flailing dragon mode.

Modern reality is hygienic and cannot merge with the paradoxical strength of the Earth. You may recall the proposed tunnel under Stonehenge (Weird 11)? Tintagel in Cornwall, fabled keep of Arthur Pendragon, is next up for desecration 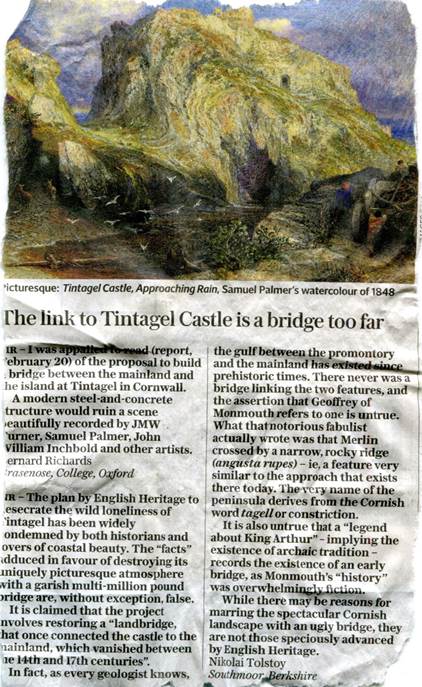 The ruins of the Alamo merge with rugged nature and that is the continuity of the myth (see RomeHyborian Bridge 2). Modern buildings cannot merge; they are set apart. The fate of cities is exactly the same; the City of London Financial Centre (a flagrant eyesore); Shanghai (a microchip on steroids); NYC (gentrified to the hilt).

Shanghai, as you may recall from Tales of Faith 2, was a city of pig-farmers. Its growth as a free trading port produced exotic diversions.

The detritus of their sins piled up in the streets and was washed by rains or sept by coolies into the river where (if you made the mistake of looking too closely), you could make out each morning the arms and legs of dead babies tangled with the corpses of dogs and giant bandicoot rats, floating away with the rotten fruit and inksmeared balance sheets on the high tide of empire. (Dragon Lady, Sterling Seagrave, page 246)

This is the bit of the quote I left off as it is quite macabre. But, this is nature, the city as a physical organism of palpitating power. You may recall Liza Minnelli’s quote on the disreputable – “I love it!” Hyborian Bridge 19 (under “Sweet September Morning”). What has happened to New York?

A good indication of what is now missing from Minnelli’s ex-home is the Power Pack/ Cloak and Dagger graphic novel “Shelter from the Storm” from 1985. The intersection of people and buildings is painstakingly evoked 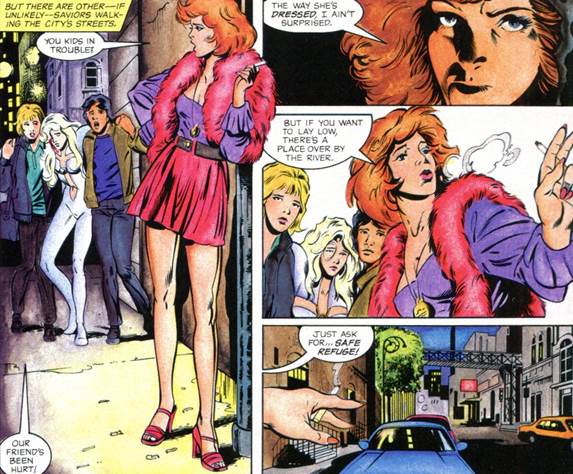 Two refugees – a Hispanic and a Jew – descend on the demimonde of the Hudson, which is evoked in true Eisneresque style by Sal Velluto. The similarity with the Shanghai evoked by Al Coutelis (Tales of Faith 2) is marked 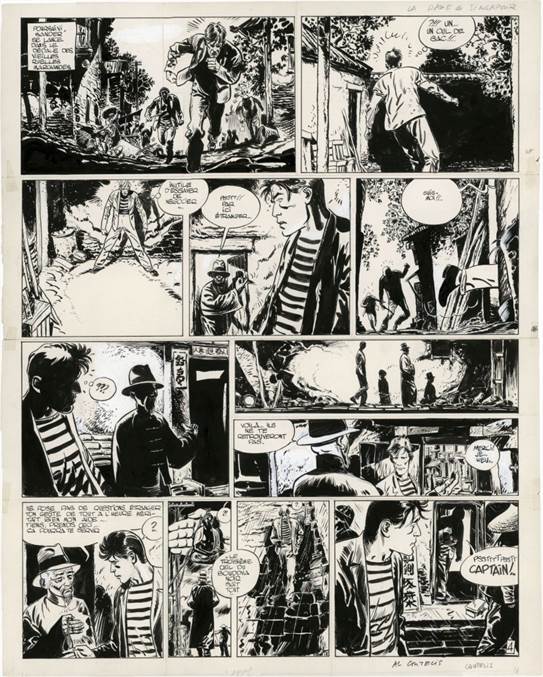 A demimonde is a region which lives by night as well as day, and is not simply an advertisement for global capital – eastern or western - “into the day and through the night”

THE WORLD GOES ROUND 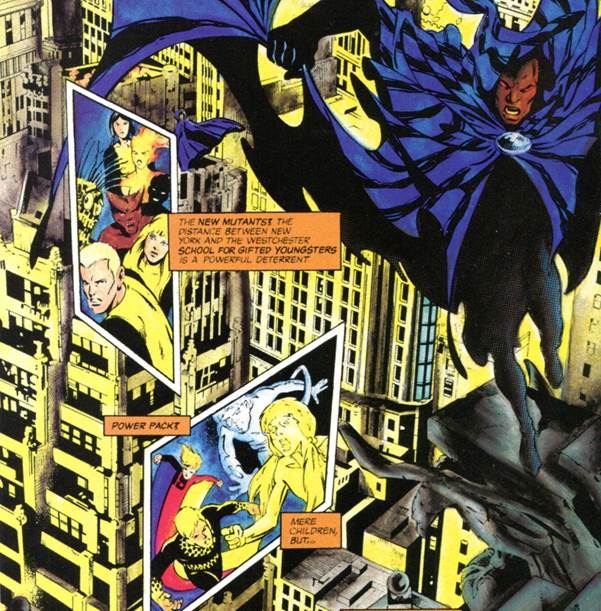 Decadent, corrupt humanity, in all its bizarre ineptitude, surmounted by glaring gargoyles and art-deco skyscrapers. This is NYC in all its transcendent glory. A city that has not yet forgotten that the world turns, living by night as well as glaring day. Cloak and Dagger are like a reversal of the usual concept of Artemis (huntress) and Apollo – BWS Tales of Faith 9 - but light-daggers are appropriate enough for a world dying under the electromagnetic god.