"When the moon is in the Seventh House
And Jupiter aligns with Mars
Then deer will guide the planets
And blood will steer the stars
This us the dawning of the Age of Valeria
The Age if Valeria
Valeria! Valeria!"
(to the tune of "Aquarius ")

Howard's hero's and heroines - and particularly as adapted into comics - have a self-reliant grace and poise that is to die for. Physical grace and psychic strength are gained through the ability to kill, be it in the deer forest or on the battle field.

Blood is strength; the ravens circle; carrion is fodder and from destruction is creation reborn. Strength is built through the predator-prey cycle through the physical recycling of material. The physical style of the action - of the hunter in the field - is the guiding principle.

"The body is moving, man" (paraphrasing John Clifton on Cerebus, see    ), the pure action that guides nature. In a social situation where the body is moving, a physical style develops (the Harlem shuffle of days gone by.)

In other words, the style is self-reliant, under no external compunctions. There are downsides to this, as was mentioned with Detroit (Drama3), but the upside is a physicsl vibrancy that articulates the strong psyche of a society. Blood and decay will never kill that vibrancy, and it will be reborn, as happened in Detroit.

The problem is that the sorcerers switch from a society of the physical (body) to a society of words (head), and then numbers (algorithms). This is merely following the vanishing point of technique (straight lines, perspective) which does without physical substance.

Without the physical substance, there is no strength, no decadence and therefore no revival (fertility). Everything g is forever new in a sterile order which is forever renovated by the removal of rubbish.

Because Darwinism is itself part of a parallel system of straight lines (perspective) that inevitability heafs towards the vanishing point of technique - see x-ray crystallography HB71.

The vanishing point is an accurate illusion. Cells are composed of water and gel (colloid), so that is their physical material (on planet Earth).

The parallel system starts with Galileo, since it is a system of straight lines (sun). Cells are not straight; they are harmonic and watery. However, the system can't detect that but can detect crystals in the cells. DNA is detected the same way.

So, Darwinian competition becomes switched from physical competition (body) to one of straight lines (head or sun) because it is part of the system originated by Galileo.

Where there is no physical substance, there can be no decay and so there is a sterile system where everything is forever new, and at the same time forever rubbish.

It's because the cycle of decay and revival is stymied that we live in a society of sterile weakness as opposed to decadent strength; the strength if revival (fertility).

The switch that has taken place makes of competition a race to the vanishing point of technique, or essentially ones and zeros. It is physically barren, null and void.

In a system of straight lines (sun) there can be no genuine physical competition (for style and social grace), only a numerical one that is attractive to the ego ( of economists, politicians).

Genuine physical competition takes place in a world of blood and dirt, where there is strength (immune) and revival (fertility). This is really the world portrayed in Howard's heroic fantasy, and as elaborated in the comics.

The world is elemental, and the Valeria story cited features the menace of the Living Wind that strips the flesh and makes of men a mere husk. 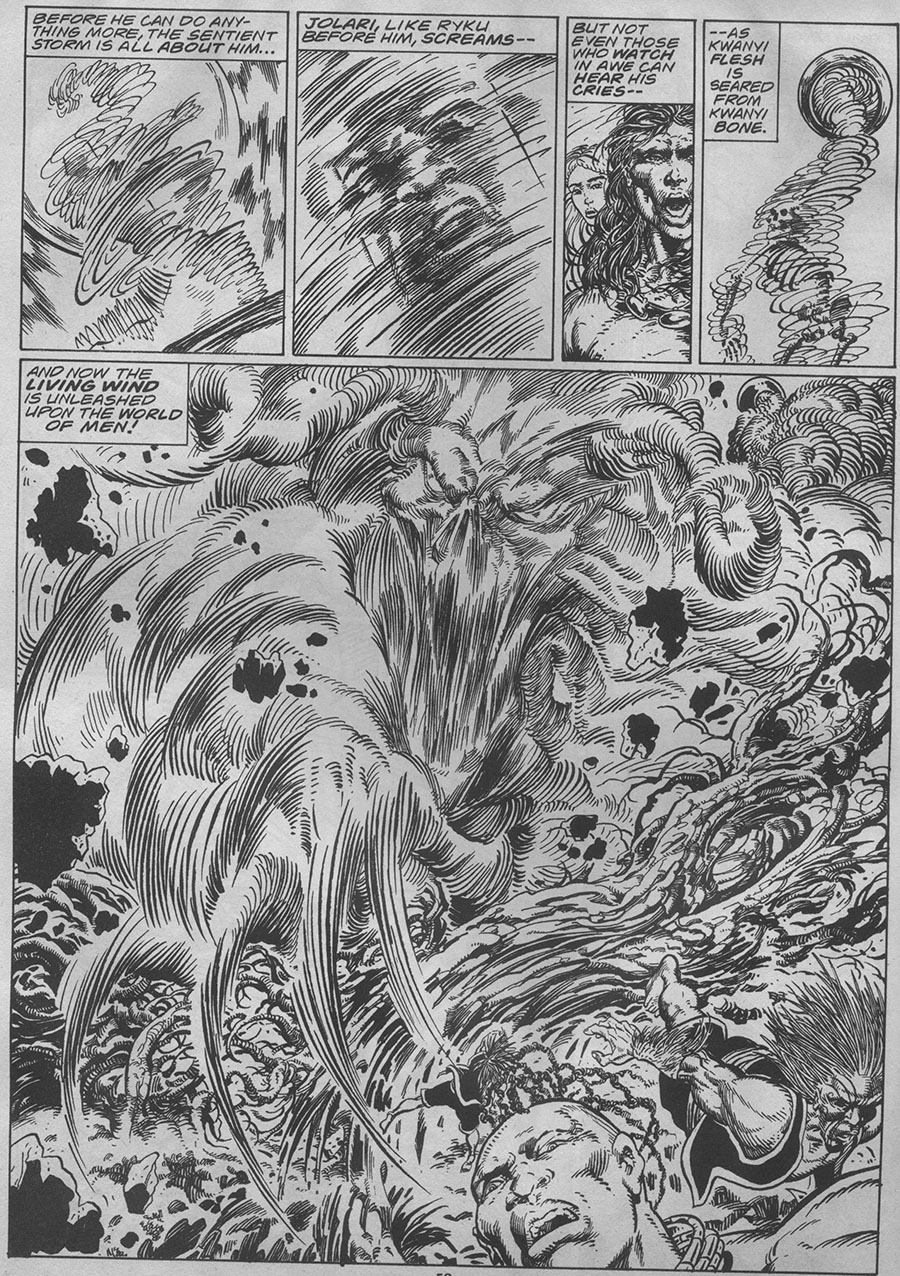 Heroic figures thrive in elemental situations where fighting style and grace of limb rub shoulders with stagnant moss and golden serpents. It is a world where things decay and where strength reigns; where the hunt for a golden serpent settles the destiny of a tribe; where the physical and psyche meet.

This world of action is as farfrom the modern one as one could ask, and the reason is the modern world is not physical. The physical world is the one of balance and proportion epitomised by the fighting figure. 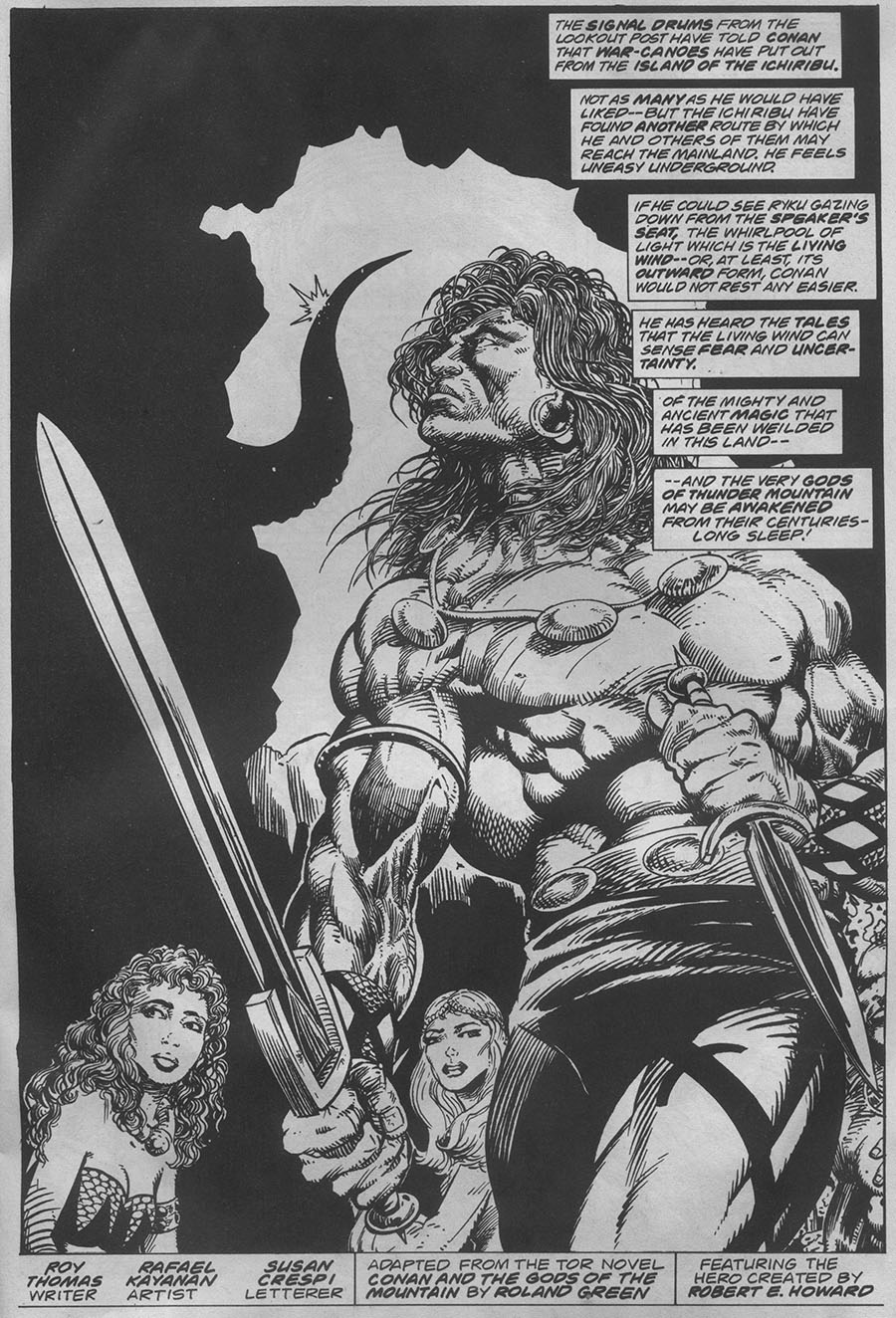 It is not to do with numbers or straight lines or the vanishing point of technique since all these originate from Galileo +sun or ego).

In the story, a moral equilibrium of sorts us achieved, though the fragile truce may not last - who knows? 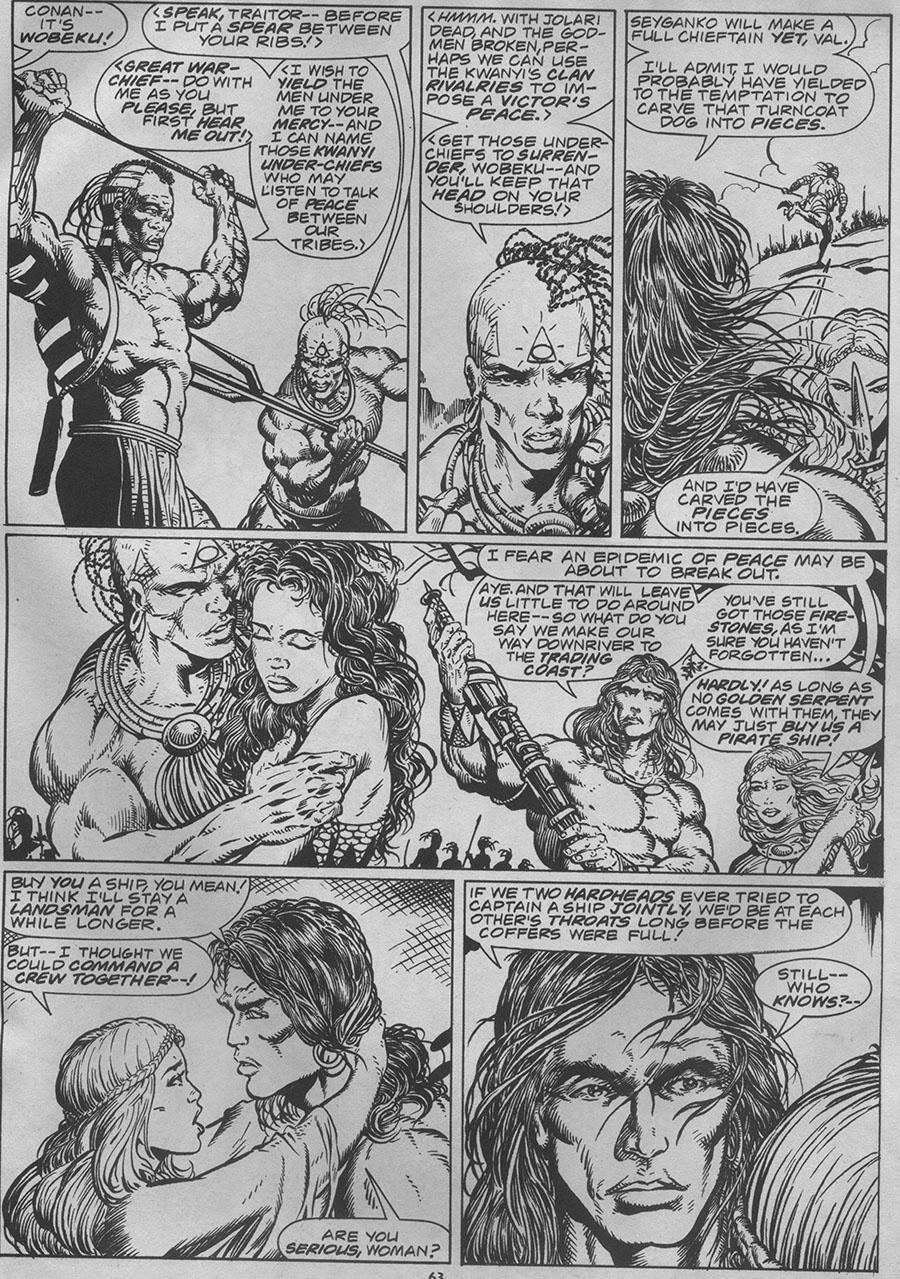 In the real world of action nothing is preordained by the glorified acolytes of number, servants of sorcerers who are themselves servants of the original sorcerer of a sterile order that rejects physical and psychic reality.