Politically-speaking, our modern era of nations that are relatively similar comes from the fermentations in France circa 1800. I got reading about Madame de Stael - a pen-friend of an ancestor of Anna Wintour - who opposed Napoleon, and favored cosmopolitan order. She wrote a book on Germany that encouraged a unified vision.

Back in about 1800 the constitutional ind-and-outs were thrashed around, and the modern state was born. What if that's a mistake of the head?

A modern state is in principle cosmopolitan with a tendency to sameness; it is much more of the (rational) head than of the (irrational) heart. Back in C14 there is a mention of Simon de Montfort's crusade against the corrupt Henry III. The point made there was that the conscience (religion) and codes-of-honor (action) relate to a physical reality that is bloody and proportionate. De Montfort on his defeat was decapitated, hands, feet and testicles cut off.

The question could then become: does the universe have a bloody and proportionate predatory shape? Is there an a-priori shape that is strong and flexible - meaning the primeval serpent?

This predatory shape is a-priiri to all the scientific facts that have come in since Newton and Galileo. The shape is of the heart and not the head; of the conscience (religion) and not logic (number).

Also, related to that P11 has a piece on Howard's Outremer. In Sowers of the Thunder, when Red Cahal and Baibars establish a rapport, the point was made that in the age of crudades, castles and Saracens, people of different faiths had psychic affinities.

Where there is conscience (heart, religion) and codes-of-honor (body, action) there is psychic strength. The strength is perceived to be worthy and honourable among those of different faiths.

This could be called the "castle" principle of history, and appears in several of Howard's historical adventures. In The Blood of Belshazzar, where outlanders of all faiths find their different pathways ending up at Skol Abdhur's renegade court.

So, the question is does the feudal principle of physical and proportionate strength have a universal, predatory truth? Within the castle is a measured pace and grace of men, women and animals that is at one with a universe if primeval rhythm (serpent).

The castle is a-priori the modern universe if scientific facts that come from the sun (number, calculation, electromagnetism). Now, there's a fairly close connection here to steam-punk, and also to the type of retro-futurism associated with HG Wells.

A perspective system is attractive to the ego (head) but inhabits a state of physical boredom for the body (inaction). In other words, the body does not move in perspective, it moves in its own physique of balance and proportion.

It is just another way of saying you are going into nothingness; sterility or rubbish (see prev.) HG Wells' short story, The Accelerator, posits a drug that speeds up metabolism indefinitely, so that everything else appears inert. This could be the first story to point to a sort of psychological appeal of speed that ends up as zero.

What I'm basically saying is that the psychological appeal of speed is a trap of perspective, and it achieves nothing except more physical boredom.

Outside of perspective (the Black Sun) is physical strength and atmosphere; the action of lithe figures in combat or hunting; the measured rhythms of socially grace; the moon rising over turreted waters; vined decadence. 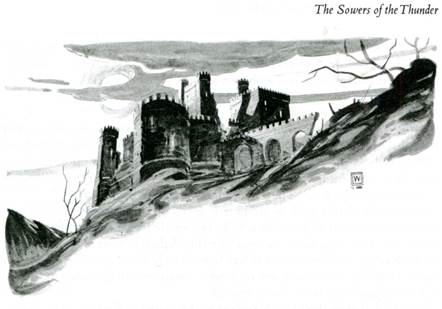 A state of physical strength attracts another type of technology, not of speed but of grace and atmosphere. Tethered to the stronghold one could imagine a dirigible blowing against the clouds.

With grace and atmosphere comes an airborne culture reminiscent of Flash Gordon's Hawkmen. The mixture of high culture and decadence is an eternal strength found in HG Wells, steam-punk and the knights of Outremer.