It seems that a few people in history are really at the conflux of intersecting branches of development - practically like parallel dimensions of possibilities. Like, Christ was at the intersection of Rome and the rebellion, the lions and all that jazz.

Byron is at the intersection of medieval romance and the ancestral, dynastic roots of human beings; and the branch of mathematical logic that led eventually to Musk's Martian rockets, the relative internet and all that jazz.

As mentioned in P118, the aristocratic poet married a mathematician, Annabella Milbanke, and in her is set the triumph of analytical reason and what is euphemistically called "common sense" over histrionic passion at which Byron excelled.

Little did I know when writing that that their daughter - and his one legitimate offspring - Ada Lovelace, is credited as being the first to use a computor algorithm!

Some of the credit goes to Annabella, who nurtured Ada's mathematical talents to counteract what she saw as the unstable, passionate side. Working with Babbage, Ada had the foresight to see his "analytical engine" as more than a calculator, and she wrote down some machine instructions in a series of notes.

This was almost surely the first program, or creative algorithm, as opposed to simply calculation, F=MA or E=MC™ etc. Interestingly, Ada thought of her occupation as "poetic science", and this may have led her to think beyond the "traditional" numbers crunching role of such machines.

The trouble is, as noted previously, the universe IS number in that elements have atomic numbers so, once a computer is invented, that track is foregone. It's so attractive to the ego if acolytes of big machines.

Once down that route, everything us sort of foregone, because it is so convincing and "real". This is the parallel system of the " princess of parallelograms" (P118).

As to where that system leads; towards the vanishing point of technique - algorithms and thought (head), and away from the rhythmic balance of muscular action (body).

The same distinction was made by Bruce Lee (Americana), who taught that one learns routines (the techniques) in order to forget them, and express the body-in-action (muscle, dynamic force, not thought).

"Give me a Mussulman who never asks questions, and a she if the same race who saves one the trouble of putting them." (page 36)

..wrote Byron in his journal, tiring of "Sin's long labyrinth " and ready to head east again. The eastern branch, which (at that time) was as unchanging as the dance of Aysha in The Eye if Zeitoon.

Fiery and sensual abandon, broken-rhythm of the soul (Bruce Lee again). Lack of material change us really muscular change: the energy of dance. What we call change is a heading towards nothingness, rather than the continual change and shifting rhythms of a primordial dance.

What this seems to point to is that the east, in the time of Byron, was identified with rebellion against the western advance - into what? Byron dashed off eastern romances such as The Corsair and The Bride of Abydos, which were immensely popular.

The east represents the unchanging or medieval world in much the same way it did to Talbot Mundy and Howard. That branch - that disparity between west and east - now appears to be frittering out as the convincing illusion of nothingness (or the Black Sun if calculation, prev) takes hold on the ego.

The more eastern branch, though, was seen in Ada's daughter, Lady Ann Blunt, who started with her husband a stud farm of Arabian racing stallions. 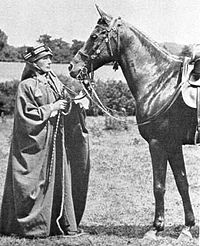 Clearly veering towards the romantic branch of the family tree, Ann was versed in multiple languages, and sped across the desert dressed in Bedouin gear, the first European to reach the fabled hole of Ha'il. 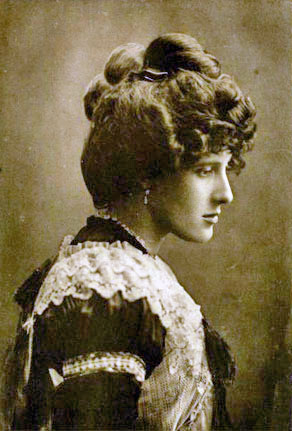 Living with her husband and Byronic relics at the stud farm, where apparently originate 96% if all Arabian equine stock.

So, these two branches or poles of development are represented in the Byronic legacy. As his line gets closer to the present they seem to get less exotic. Finally, the farm was bisected by an "A" road and the stock sold off. That seems to say it all.