Nature and the spirit of invention go hand-in-hand; they are not bound by facts as is the mind of modern Man. You know the arbor depicted on Trajan’s Column (prev)? Where I am there is a heatwave on and a group of tramps have descended and live in our very own urban arbor, a demicircle of benches and ornamental shrubs on a raised bed overlooked by tall trees, quite moist and shady. It’s the only cool spot in town, really, and they caterwaul there to their hearts’ content.

As I write, I behold a semicircular bay painted by David Shepherd somewhere in Africa –looks like Morocco– with a long sweep of souk, arches fading into the distance, reflections of bayside buildings and a squat boathouse with moored dhows, overlooked by a ramshackle hill. Sheep and Arabs dot the shoreline. It sure looks cooling.

So, water is cooling and has reflections; trees are cooling; earth has moisture. If you want to escape the sun, water and shade are the two elements, of which plants provide both. Plants destroy light by photosynthesis (chlorophyll), so if you want a universe that is not ruled by Einsteinean laws of light-relativity, you plant trees!

There are two universes. One is built of opposites, destruction and creation, and is a force of nature (like Rome). The other is built of facts in a hermetic maze of logic and, like fools, we believe the facts. But the “fact” is light is destroyed so it no longer exists. If you look at the relief of Trajan’s Column, it is built up of light and shade. Shade is just the opposite of light, or non-light.

The basic fact is we don’t live in a universe where light is not destroyed. If we did, we’d live in an Einsteinean universe of pure precision (the one “they” are searching for in CERN). It doesn’t exist; it’s a pure fact of the mind, the disembodied head. Every time you shut your eyes light is cut-off and destroyed. The night, the dream, the blood-red moon, the harvest.

Nature is the mother of invention and we are being sold a false world of “facts” that are born of a disembodied head. In a heatwave you crave water, shade, anything that is not fire. Fire – or electromagnetic radiation – is anything that is not balanced or proportionate. I accept Mundy’s strong critique of Rome’s blatant misuse of wealth, fraudulent moneylending and debt-ridden engineering projects, but the one thing Rome was was balanced and proportionate. Without that it would be one man’s tyranny, that man being Caesar. But it is much bigger than one man, as big as the gods of earth and water.

Ancient societies were as big as the unreality of cosmic symbolism, and men were a superstitious lot

They could gloom like the grey of a Baltic twilight. It had leaked out that Tros had told Sigurdsen the world was round and that he meant to sail round it. Sigurdsen was drunk at Helma’s funeral and revealed the secret.. If they could have believed the theory it would have been, in their opinion, irreligious and indecent to discuss it. But to spiritual blasphemy was added temporal danger since they knew, as everyone had always known, that the world was flat and over its distant rim the sea poured into eternal darkness. (page 525)

The 9 worlds of the Nordic tree Yggdrasil (CH5). A tree is simply the opposite symbol to everlasting light, since it absorbs and transforms it to water and greenery in rich loam. This is a natural logic that ancient people see in the forests and lush fiords of their homelands. While we can agree the Earth is no longer flat, the symbolism of lush waterfall-laden greenery is as real as ever. Symbolism is unreal, which gives it introspective content and a type of hyper-realism – see Alternates Outtake Dali and style. 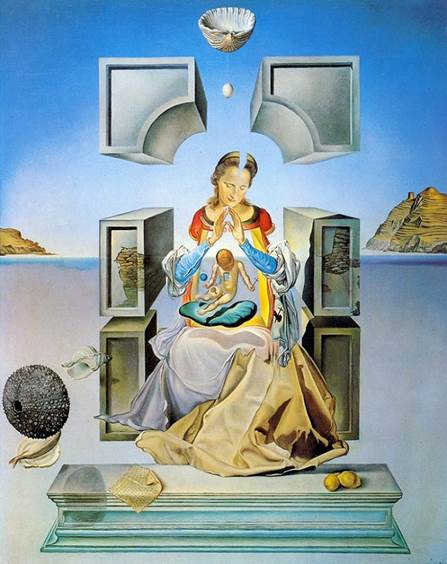 What I keep returning to is the fact our world is hyper-convincing doesn’t make it real. This is just Apollo – or the false Apollo of order and reason. There is also the moon and water, the luscious landscape of a dream, Diana the huntress. Dali dismantled reality to make it attain the hyper-realism of a dream. His Madonna of Port Lligat is a mixture of Mediterranean sea, marine lifeforms, classical imagery and religious iconography. Whereas the modern world tries to convince with facts, Dali takes rocks, pediments and figures to make a living symbol.

The day was one to make the blood race in his veins –all fair spring weather with the leaves a-budding, blue sky overhead, and underfoot the violets and yellow primroses; scents of wet, brown earth, and bird-song in the air. But Tros’s skin tingled while his blood ran sluggish, and the constant picture in his mind..was of his ship without a crew. (page 546)

This is a description that could easily come from Howard – the depths of a primeval forest, where water and shade replenish the spirit. Light has to be destroyed – by greenery – in order for there to be any romance. I know this sounds  elementary – dappled sunlight in moody groves’, limpid overhanging leaves – but that’s because we live in a parallel reality of the solar dragon.

The solar dragon is tamed by modernday sorcerers – for example, we are given an electric-green future (see “Amazon Houses” prev) but we are not given the destruction of light. In a forest, destruction is a cyclical process; from destruction comes creation and fertility.

That is romance. Tros pays homage to Helma, by having her azure image carved on the bow of his boat, and the launch is a rebirth..

Of course she should see. She was his wife. She should sail the high seas with him.. “Were you thinking of leaving me behind?” she asked.. “Nay! But I had not thought how you shall go before me!.. And now I know what I will do with the ship’s stem beneath the serpent’s neck. I will set your image there, blue eyes and golden hair and all! (page 416)

The crowd roared and the druid’s trumpets blared. The sheet fell away from the figurehead, revealing Helma’s image, blue, with golden hair and crown, and above that the great glittering serpent’s head, whose tongue moved on a gymbal, flashing four ways in the sun. (page 578)

Look, I know you may find this simplistic – we live in a parallel reality of light (Einsteinean precision) that follows straight lines, much like a railway junction (CL Moore Tales of Faith 12) In order to be in reality, light has to be destroyed (photosynthesis), and then you are in a fertile universe. The solar dragon – what you see around you – is light tamed, which gives a convincing appearance of reality. Against this is set romance – go back here to the 30s pulps 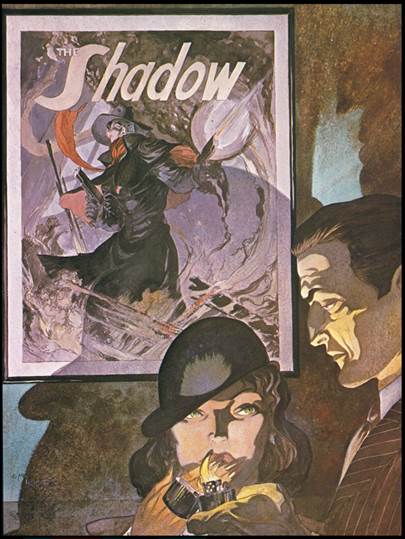 The pulps are connected to ancient romance. In Spenser (Aspects 1), the pure knight slays the dragon in the labyrinthine ways of a primeval forest. In Noto’s “Red Lace” blood-sacrifice tells the fantastical history of a love affair of Skranos that death cannot kill. 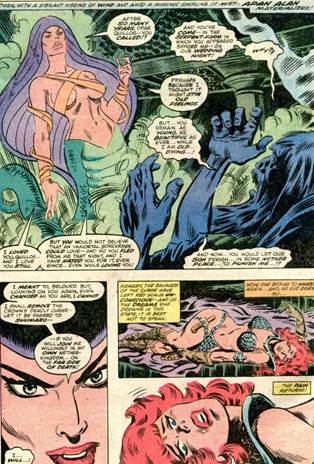 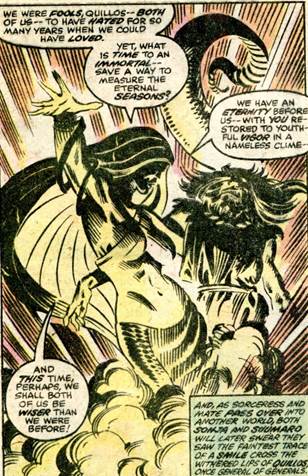 Darkwood, blood-sacrifice and lakes of scarlet-blood. The unreal imagery is the reality because it is introspective and refelcts cosmic symbolism. The power of rebirth and the lifecyc le of Man. As with Dali, the unreal has a hyper-real quality. Apollo is just appearance, so naturally the reality we are in is very convincing appearance-wise! The more convincing it gets the falser it gets because only destruction creates the perfection of a lifecycle – fertility.

The romantic aura of an Arabian souk is a study in contrasts, ramshackle heaps of merchandise, shafts of sun, bleating goats, the flash of a knife..

That is the old world found in The Eye of Zeitoon (prev), hazy and shady and lazy (according to western precepts). According to “them”, order and reason increase and put such shady places out of business. Yes, but that only seems inevitable because we livge in a parallel reality of light! There is also shade and greenery, rebirth and lifecycle (oasis). 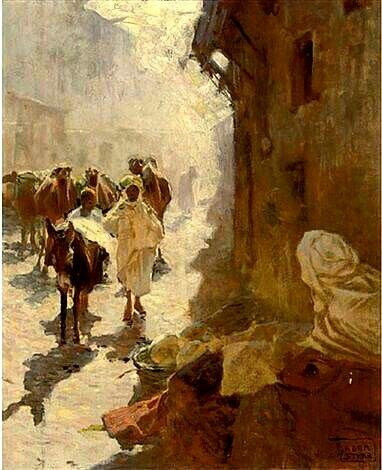 As I keep saying, our reality is only convincing in appearance; the dark, moist depths of a dappled forest are actually reality because light is destroyed, “They” are continually telling us we ive in an Einsteinean universe of light, but it ain’t so; that is a parallel reality of ultra- precision and order. The real world is shady, dappled, moist, almost faerie-like – the Hyborian Bridge.

This type of unreality is introspective and reflects cosmic symbolism. Unreality is hyper-real because societies are no longer bathed in a wash of facts; there is the heightened drama of seeing events at first hand  - the launch of Tros’s boat – and the colossal sense of destiny seen in Howard. More on that next time; in the meantime, the fantastic parallelism of our political sphere can’t have escaped your attention?

Whether it’s Putin’s Russia nefariously doing this or that; Pakistan’s military-intelligence (good luck Imran); Turkey’s Erdogan’s paranoia; the ins-and-outs of Brexit (zzzz); Trump’s multiple tweeting.. no politician can escape unless they stop being reasonable and ordered, and just chill-out at the oasis, surrounded by caravanserai and long twilight shadows.