What I like about Mundy’s Tros of Samothrace is the pure imagination that comes into play – the fights with Caesar that are never in recorded history etc. History is full of chance – the wreck of Caesar’s fleet in the channel – and “facts” are just the end-product of events (the gods). Mundy has masses of atmosphere – at sea and in the dense forest and mudbanks of the Britons. They are a rambunctious ensemble of Welsh, Norsemen and others; indecision is also rife and duels as often as not settle a debate (tableaux probably a main influence on Hal Foster?)

What I often tend to think is the spirit of invention is much truer to the zest that Helma, as the defeated invader who becomes the wife of Tros, exhibits, or the spunk that young Glendwyr displays in defeat, or the throbbing hooves dragging madcap chariots over brook and brine.. because that is the story. Same as, as a kid I read CS Lewis’s Narnia for a sort of sublime primitivism (in Lewis’s case a Christian vision). It always seems to me the factualised account of history is false because facts are just the end-product. Hillary Mantel is the establishment favorite (Wolf Hall) because she is good at dramatizing facts – like an academic without the invention of Mundy.

But facts are dry matter – we are immortal souls, and in Henry VIII’s day that would have been fact number one (a non –fact). The reality of life is non-factual; spirit and the indecision of the swaying serpent of the unconscious. Zest, change of heart, the bright-eyed loyalty that Helma displays to Tros. The reality of history isn’t served by a slavish devotion to facts because that is too dry to be a story; zest and abandon as well as intrigue.

To be dry is not to beware the ides of March, to advocate the perpetual rule by the cleverest politician, which is what Caesar was.

He is learned. He is the first of Rome’s high priests (Pontifex Maximus). Caesar can split with you the fine hairs of philosophy and law. But he will come with legions and tax-gatherers. And when he goes, it will be with chains of prisoners, leaving his lieutenant to complete the harvest he began, a harvest of money and slaves. (page 441)

Mundy makes it very clear that the Britons, for all their kingly ways, swagger and bluster, are under the sway of the druids – venerable, white bearded forest-dwellers of antiquity, with sing-song voices and rustic temples.

Notwithstanding Mundy obviously thinks the druids speak age-old wisdom and truth and Rome speaks for falsehood, Celtic deities were incorporated  into the Roman pantheon, as at Sulis-Minerva. 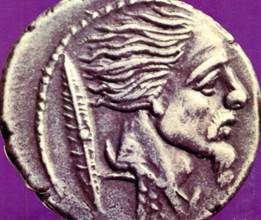 The ancient way was to honour the defeated foe. In the coin minted for Vercingetorix, one sees the strength of gaze through the wild hairlocks (something missing from most of the Hemingway lookalikes!) Rome conquers but is magnanimous in victory, which might seem like a raw deal! Another way to put it they are no ideologues; the reality for them is human valour, sweat and sinew, raw physical achievement, elegance, fortitude. They do not impose an abstract view of the world; that is for ideologues to do, not gods of the groves or goddesses of the water (Weird 11) 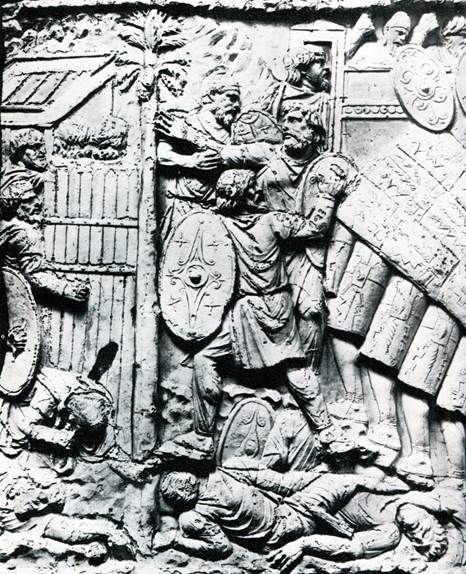 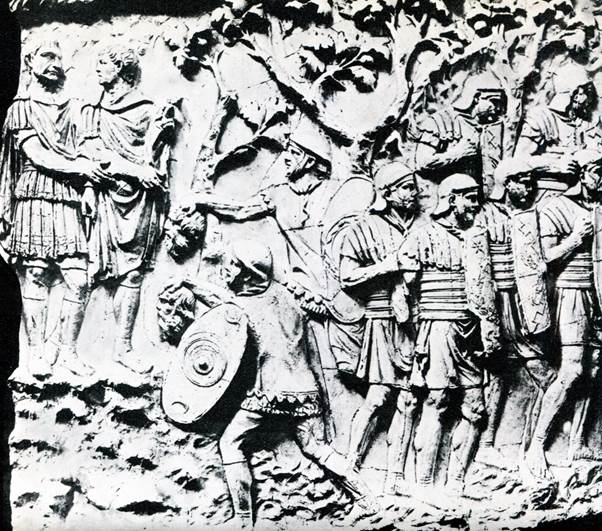 With abstraction, the human head becomes disproportionate (to the body – Weird 15). In ancient days, the abstract thinker could be a menace to the state (the fate of Socrates). Caesar, you could say, was the first modern political mind, and paid for it when he crossed the Rubicon.

Caesar is a “reptile” who takes Fflur and Helma prisoner; in retaliation, Tros and the Britons descend on his camp and, with the aid of underworld alchemy, capture him and take him aboard their longboat where he almost outfoxes them with glib rhetoric.

“He forgot..that I have his private correspondence, that I know who his friends are in Rome and who are his enemies. The thought never entered the calculating brain of Caesar that I will go to Rome and there, it may be, break the wheels of his ambition.”  (page 516)

Caesar may have thought he was Rome, but no one created/invented Rome. It was a force of nature like an owl, or a worm. It pays to be fair to your “enemies” and just empirically look at what you’re seeing on the famous Trajan Column in Rome. Trajan (who slightly resembles Lindsay Anderson, the aquiline film director Outtakes 6) gracefully gestures to his compatriot. You can almost hear the select phrases of oratory falling from his snarling lips.

Roman tunics are utilitarian and graceful, togas folding classically in BWS fashion. The elegance and dash has the slightly feminine aspect of a fop (“Caesar is a woman”, is the gossip). Behind Trajan, a shady arbor frames the triumphant ceremonial. The impression one gets from Trajan’s Column is that Rome above all values balance in the natural kingdom of things: the body, the utilitarian costume, trees and of course savage man-to-man battles.

That’s being fair, seeing the differences to our dear leaders in their lumpen business suits and static stances. Rome is a land of human grace as well as savagery. But Rome is not Caesar, who is a “reptile” and a calculating machine. Caesar essentially is the modern mind without the proportionate grace and balance of the Roman state. The Senate decides to kill him, whereas we worship the ground that Putin, Trump, Netanyahu and Co walk on.

That is the big difference with the ancient world. They are part of a natural kingdom, the spirit of invention is a primeval force.