He who is loyal and faithful to false gods, and who beareth himself manfully in a false cause –aye, and though that cause ruin for all who obey him, and all who oppose him –that one, in the scales of the Eternal weigheth well. Aye, he is infinitely greater than the fool who serveth Wisdom with his lips, but in his heart serveth malice, greed, ambition, fame or any other of the weaknesses that strength despiseth and that Wisdom no more knoweth than the Light knoweth Darkness. Hold ye fast to faith and loyalty; and though ye slay me for a false cause, ye shall stand forgiven. (Saying, chapter 24 Rome’s Centurion)

This Saying perplexed me as he has whole pages on Rome, the mistress of the world, glamorous even in treachery and deceit. Tributes from all corners, the spread of Roman law..at the same time consuls were powers abroad and adopted hybridised cultures that kept contrary elements (Sulis-Minerva Weird 11) Rome was not so much right as the glamorous centre of the ancient world where all roads led.

The psychic strength of this is indisputable, and only comes up against internal contradictions of freedom versus order (Pictorial 11) As an adherent of Madame Blavatsky’s Theosophy (prev), Mundy’s view was probably that Druidism is the true faith, and Rome was false. I sort of take the opposite view that all the nature-religions are equally true to our unconscious dreams, visions, and Rome was careful to incorporate native deities into its own shrines and mineral spring temple complexes.

Rome isn’t false, it is simply unsustainable as a just system administering order at the expense of freedom (the law is an ass) and more pertinent is the Roman wolf that is Caesar, who believes only in his own destiny, which happens to be where I’ve got to in the story! In ancient times, might was right and contradictions were kept. In modern times, contradictions are wrong; we are kept unaware of Diana running forever over hill and dale, hounds baying at the moon.

What is right for us is the sun into whose light we plunge, a logical maze where fact becomes fiction (like CERN, the Einsteinean prison of precision) and sameness rules. Contraries are strength; the sound and dust of the range, Levi jeans and spats, Hudson Bay meat-packing yards (Americana) Politicians can only see rightness, which to them means sameness – no contrast, no contrarians or hippies, no contradictory hunting peaceniks, no frenetic souks with camels-a-baying when shopping malls are fit for all (including Saudis, natch)

In other words, no spirit, just mundane reality symbolised by the dollar. This is pretty obvious in Israel, which has just passed a law that only Jews can have nation-statism, there can be no contraries, no friendly rivalries let alone any desert wildness where camel carcasses lie and vultures fly. There can be no unconscious strength of primal forces of the harvest and the moon, round-dancing in the gloaming (Hyborian Bridge 6.) Ruth, the matriarch of the gleaning, a Moabite (a convert by marriage).

No, that is too much like social harmony, which the politics of sameness has to steer clear of. Spirit is a quality of difference and –Pictorial 11– there is a symbiosis between the three Abrahamic faiths in Jerusalem. That is a sort of bizarre reality, not mundane atall. Politicians like to be neat and tidy (seeing as they’re Martians) and don’t like contradictory elements, even if they’re real!

The elemental forces of nature – as Mundy says of the trader Hiran-bin-Ahab - exist even to a monotheist. Seas of wheat, the Old Man and the Sea.. Hemingway, deep sea fisherman and roamer of the pampas range, might not be amused by these clones 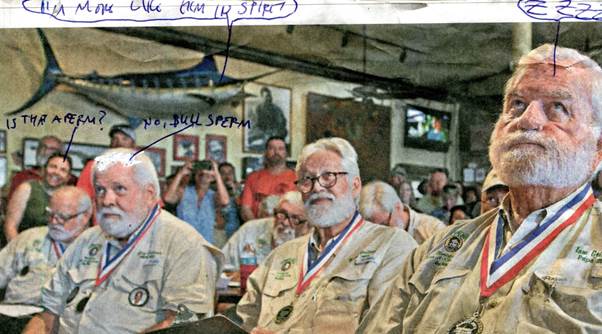 Hemingway, the hunter, his catch.. the eternal cycle that eludes our Martian friends in their solar observatories, their convincing parallel reality of sameness that to them is right. Where things are convincing, they are factual and may well be in a parallel reality. The nature of a souk, a trail of Texas steers, a prairie village of tepees, is a type of frenetic disorder that lightens the spirit but doesn’t convince the rational mind.

What’s bizarre is I don’t think they have any awareness of how brainwashed they are by our Martian overlords. One of the reasons for the St Tropez makeover (prev) is that environmental rules are respected, and “electric boats will meet yachts.” Can you imagine that happening to Hemingway?

There are two different things. Spirit is not mundane matter. In the modern world ideology is reality and everything is topsy-turvy. There is a war against the human psyche (by Martians). The psyche is unconscious reality; the spirit of the huntress by the light of the moon on golden sands (Bardot); the last catch of the Old Man (Hemingway). The circle of life on the great ranges of the west and the packing yards of the east (Americana)

It’s not a comfy “electric-green” reality. In the UK, the Marquesse of Bamford has a mega-farm shop in the Cotswolds, selling organic meats, cheeses, sough bread etc. so that she has almost built a village there out of tall wooden and glass buildings. As usual it gets reduced to buying and selling; she hasn’t got a pig-in-tow let alone mucking-out the stables. That is “their” version of green, except it’s not. Green is a field of tall grass with wild poppies and plentiful butterflies, mayhap grasshoppers and chirruping at nightfall (I read somewhere that the wildest thing Theresa May did as a child was run through a field of wheat! It’s enough to make you cry with boredom).

Green grass; golden sands; the spirit of adventure - Bardot; Hemingway – that is wild and free; anything else is a parallel reality of the wormdollar of sameness run by Martians to bore US into turpitude.