There are two totally different worlds, and the more they diverge the more “convincing grossness” there is. Our masters are convinced by the dollar, but what use is money when you are gasping for water in the desert? The $ greases the logician’s wheels as you can see from Amazon’s endless warehouses, their floating warehouses and drones.

They are building a world of pure information but, despite what pop-culture gurus like Grant Morrison say (Hyborian Bridge 4), we are creatures of expression who fashion our own time and space. There are two different worlds; one is the almost autonomic wilderness that Man stewards with rustic simplicity, the world of indecision and hireling shepherds guiding flocks with wilful abandon. 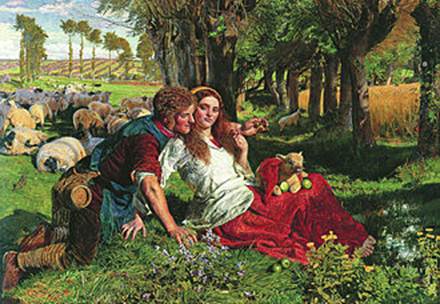 The meaning of Holman Hunt’s painting is always open to question. According to him it symbolises the pointlessness of theological debate at the time – so there’s a type of indecision there, seemingly mixed with rubicund guzzling under the apple trees. The indecision might be mixed with inebriation and high or low spirits? In any case, it seems quite a human situation of contrary desires and, as always with Holman Hunt, the nature realism is all highly symbolic. The shepherd shows a death’s head moth to the wayward wench. Why? Maybe because the sheep are wayward, the lamb on her lap next to green apples which cause sickness.

The interweaving of life and death is reminiscent of BWS, what he calls “images of forever” in Something Ic Waes (Pictorial 18) He has a very similar way of building up a symbolic narrative with a detailed approach to natural realism

Most of the potentially good artists today, it seemed to me, were employing themselves as de-coders for a writer's ideas. Illustrators for stories, text material in magazines that, as Tom Wolfe observes, serve no other purpose but to illustrate text and have no value beyond that premise. In other words: Illustrations that if taken out of context were without meaning, reason or even, and this is by far the least of all, personal intensity. It was my intention (and still is) to create pictures that either told their own story or needed no such backgrounds at all.(“A Fine Madness”)

Content archetypally is the serpent of the unconscious, the Prime Material of Jung. The loose female serpent that weaves to and fro between reason and pleasure (Pictorial 1) The serpent is dangerous, but is not tamed. The dragon that is tamed by sorcery must be slain by the pure knight (see Noto, SpenserPictorial 2 Aspects 2,3)

Awhile ago I sent this email to Stuart Hameroff (Quantum Consciousness), obviously with no reply

Quanta are "bits" like a computer and cannot therefore have consciousness. How, for example, is sensuality conscious? Only through the action of sensual movement, such as a worm. From the action you get a meaningful symbolism. If you can answer this one, I salute you!

(channelling a scene from Milius’s Conan). The point I was trying to get at was a worm isn’t simply “abstract consciousness”, it’s Prime Material, the giver of rebirth, creation from destruction. Any notion of abstract consciousness does without the unconscious, which is actually reality. Hameroff is yet another example of a logical trend of thought that leads precisely nowhere, to consciousness as a thing in itself, instead of an awareness of the meaning of dream and cosmic dragons (Jung Pictorial 1)

Our consciousness hovers over the autonomic. As humans we breathe evenly through mucus cavities, we swallow with sinuous abandon, we romp.. from which you get symbolism. “Convincing rightness” is a world where fact becomes fiction because there is no underlying reality of the unconscious – the sinuous serpent in her lair (cave, treasure). It’s BECAUSE our world is so factual that it is so wrong; we need more, much more naïve guilelessness that is in touch with elemental forces, spirits of the air, water, sand.

This reminds me of Brigitte Bardot (Bardot), who is so barmy now she sounds like a ghost of the 50s and so makes perfect sense 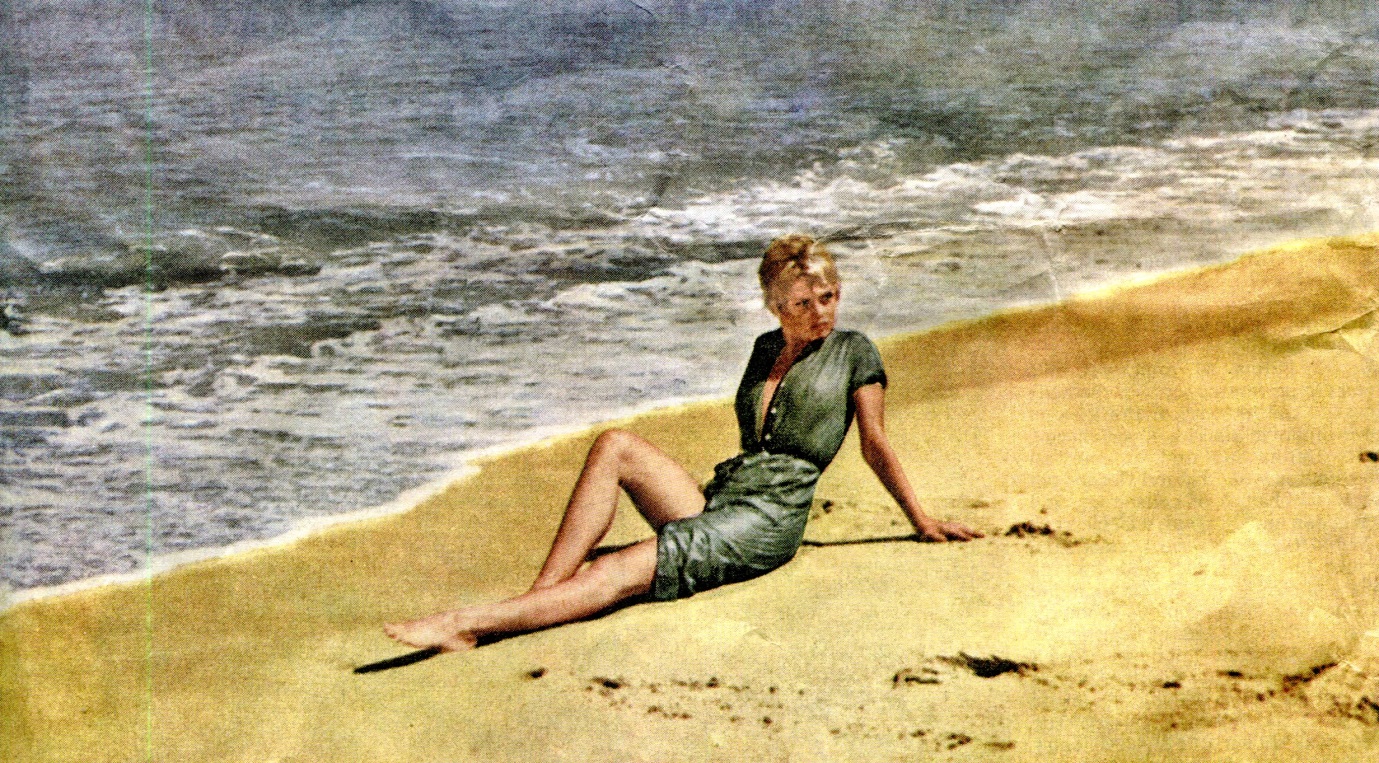 ”At first there was nothing. Then beaches appeared after the film And God Created Woman. Each was different, funny and unconventional. There was joy, it was a symbol of freedom.. But with this reorganization project, this beach will become monotone when it was so charming. It’s tragic.” (Bardot in DT on demise of St Tropez, 20th July)

That says it all, really, because “convincing rightness” is the language of the dollar where everything becomes the same. We – homo sapiens – need to go back to our primeval roots, the naivety of just living in a contrary world; storm, sea, the dawn

At last, with a great laugh of contentment, Tros affixed Caeser’s seal and went out with his arm around the shivering Phoenician to greet the golden dawn. (Tros of Samothrace page 193)

Mundy is more Homeric than perhaps he’s given credit for, and there is a metric sense of the heroic battling through the elements and fickle men to the next glorious dawn spreading over the green sea. Tros of Samothrace is a very good mix of intrigue and poetic simplicity. This is well said by the Phoenician trader Hiram-bin-Ahab.

“Trade and adventure, two jealous wives, helping, hindering each other. Hey-hey! I have been a good husband to both of them.. the same and not the same. For when I trade.. I look to profit. That wife is a thrifty one, you understand me?.. And when I go adventuring.. but I have seen strange sights in my day..” (page 192)

I did make a similar remark about Hyborian kingdoms in Hyborian Bridge 1. The pragmatic trading is obviously not all they do; they are contrary city-states in balance; the iron-willed adventurer roams their jewelled borders on sandalled feet. They are in touch with the dragon of the unconscious, which is a balance between reason and pleasure, the dance of life that is pure lustre.

The two men who had come with Conops wree a godsend then, for there was the sail to bend on, and they had it done before the light wind came that blew away the mist banks and showed Hiram-bin-Ahab’s ship rolling easily at anchor, like a living thing that laughed. (page 215)

The modern world is all trade, a “convincing rightness” that makes everything the same. The cosmic balance is gone; the serpent inside us that sways to the rhythm of life. Gone to the service of the wormdollar, the tamed dragon that must be slain by the pure knight who weaves to his own song (or the unicorn of Noto Aspects 2). The Homeric rise of yet another dawn over the eternal green sea; the metre of heroic verse that gives life lustre.

The eternal rhythm that Man has in microcosm: St Tropez, an Arabian souk, a 50s scene from Jacques Tati.. If you want to know what I mean by “convincing rightness” you could look at Tati’s Playtime, with the replicate city apartments; they are seemingly separate but actually identical, each in their hermetic world where fact becomes fiction and there is no sense of cosmic destiny.

Life, death, interweaving and contrary. We don’t see it, it’s hidden from us in underground slaughterhouses. Life is cyclical or it is just something that is made to seem convincing, a half-life, a fiction (the false Apollo). The more convincing rightness, the less contrary.