In contrast to the sea air of a trading city, Athos reminds you of the seething decadence of Rome in her decline. Her wealth flows in, not through maritime currents, but through the loathsome subjugation of the lowly Zotozians, who slave like beasts of burden to feed the coffers of the slovenly Athossians.

Noto seems to revel in the primitive, for the Games of Gita are an excuse for the mob to demand the execution of the much more athletic and superior Zotozians. Lust for blood or for nourishment inflame these stories, as Sonja and Mikal next encounter the Lake People (#4), who have bred unholy vampires amongst their kind.

This same theme is repeated as Sonja is entrapped in the Singing Tower (#6), where bee-creatures

pour quantities of heavy golden nectar down her unresisting throat

The elixir is indeed gold of a kind, and breeds docile queens to fulfil the wishes of the keeper:

The episode plays around rituals of nourishment and blood-sacrifice, as the keeper himself is devoured by loathsome larvae, and more gold is found, in sarcophagi. I quite like that, as it is the extreme opposite of a world where people are vaguely content with their lot, as the money-machine whirls round their heads. Noto speaks of a massive amount of content (as opposed to “being content”) – psychic and physical. The lifecycles are loathsome, and the wealth a type of nourishment that incapacitates the body of the queen.

It’s primitive, and makes you wonder if the wealth floating around our heads is real, or just an abstract quality we’re conditioned to think of as real? Wealth that affects your very lifecycle strikes you as very real, and more to do with religio-culture, the golden opulence of ritual. For more on this, see Hyborian Bridge 6 Adam Smith.

Are our lusts distorted and deviated by the money maze? Alan Moore and Melinda Gebbie tackled this theme in Lost Girls. Lust, sex, birth, death are all primitive concepts, with their own “thingness” hinging on fertility. Noto is exceptionally honest to those themes, and so the weirdness of Athos and its surrounding territories is very thinglike. Cravings and bloodlust are in her societies as real as they would be in a garden pond! (believe me, they’re hairy places at times).

I suppose you could ask do we want societies that are like garden ponds? Yes, but we want to have garden ponds, we want town-and-country, we want riders of the ranges, hounds on the hunt, herds on the move that tie us to natural cycles. Everything in the modern scene conspires not to do that; lusts and cravings and bloodshed and filth and rituals of cleansing that make a society physically and psychically strong.

If our societies are one-sided, they will only have the appearance of reality (the false Apollo). Everything that appears “dark” or seedy or dangerous will be stashed aside, whereas in nature both sides are always there (the rose and the briar). If there is a type of nothingness at the root of society, it comes from the human head, from the absence of an empirical tradition. The head that is very easy to fool into perceived truths that are delusions of ego-lust that seek to fend off contradictions with the logic of a prison.

For example, at the end of Weekend (67), the consumption of female flesh is ritualized by the hippy cannibals. This is the exact opposite to Totem and Taboo, where the primal father is eaten by the sons. The film ends with a barbecue in which Corinne eats pieces of Roland’s body – along with a slaughtered pig and some tourists – but all she says is, “Not bad.” The primal patriarchal privilege of Freud is neatly skewered! 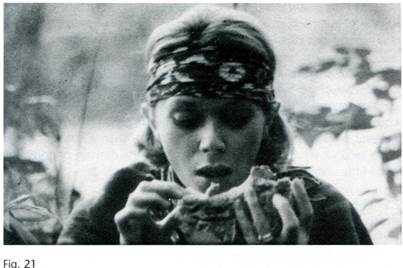 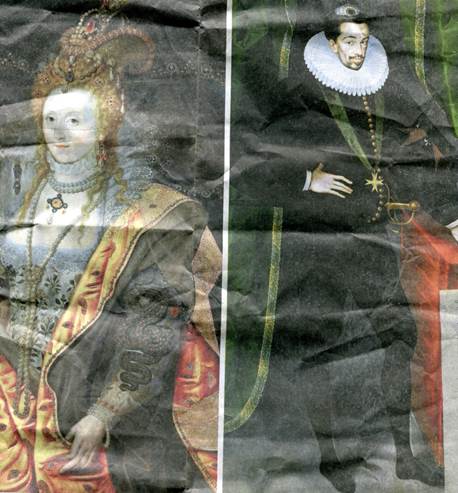 The Singing Tower, in Red Sonja #6, is another great example. The tower, built from the golden elixir of the bee-creatures, is a pure phallic symbol. 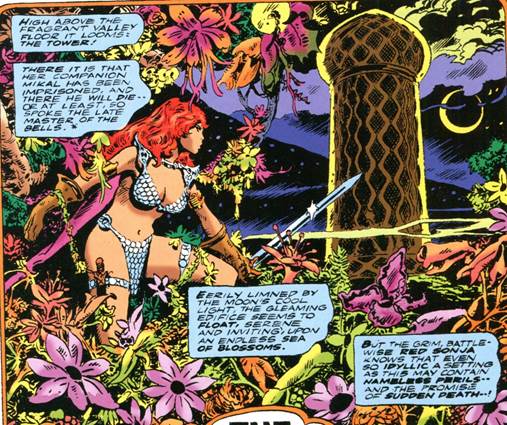 Now, is the tower literally wealthy, does the phallic symbol signify wealth, or does the wealth signify the phallus? Well, I’d say all three, which points to the problem of dogmatic Freudianism (see the crescent moon?)

In the final analysis, wealth is fertility, which is not a phallus lest you forget the female glamorous element. The contrasts and contradictions inherent in fertility are a classical port-of-call and bring in death, decadence, incestuousness; various awkward situations such as the beautiful Venus living for six months of the year with Vulcan, creating exquisite objets d’art in his stench-laden forges.