Is – or was – Freud a cult? It occurred to me when I saw an article on “Freud’s Rings”, a new exhibition in Jerusalem. These were signet rings carved on miniature gems with Greek myths handed out to his inner circle to “bind” them, though he seemed to end up quarrelling with most. Of course, he quarrelled with Jung and it’s sort of curious to hand out ancient Greek deities which cannot be overridden by logical dogmatism.

It reminds me of Jean-Luc Godard’s film Le Mepris, where the enigmatic but implacable deities write the destiny for the modern “homme nerveuse” – Man who cannot make up his own mind, who is no one.

Modern Man has facts that give him a vague impression of truth – it’s like a complete contradiction! In the film, Fritz Lang praises the simple, honest cunning and courage of Odysseus – man of adventure on the seas of fate. That type of man of almost supernatural confidence and great psychic power, who trusts the ever-changing gods, is Mundy’s model for Tros of Samothrace.

Then he took the helm from Sigurdsen, and as the bellying sails were sheeted home, he felt the thrill of the contented sweetness of the ship's response. With creaking cordage and a boiling wake, her serpents tongue aflash in the golden sunlight as she plunged over the lumpy waves, she heeled to the increasing wind and raced for the open sea...

"I am a man! I live" I laugh" he said, and with his fist struck Sigurdsen between the shoulder blades. (page 607)

Tros grinned. She had touched his genius. His hero was the great Odysseus..He could make up a tale on the spur of the moment to meet almost any contingency. “Tell Balbus I bring him opportunity to be a greater man than Caesar! He said confidently. “Bid your master tell Balbus to trust me, that he may stand in Caesar’s shoes.” She smiled, stared..her eyes astonished.. (page 698)

The serpent prow – symbol of wisdom. Modern Man has facts which make him vaguely uneasy – it’s like a complete contradiction! If there is a contradiction there, I think you can see it in the “facts” of Freudianism, which give a vague impression of libidinous dogmatism. A lot is left out, not least the fertility of the Earth, our Mother (the moon, her “daughter”). Perhaps this is where Noto’s blood-obsession comes from? Maybe she’s not deliberately being anti-Freudian, but you wonder. It has to be said Frank Thorne outdoes himself on Noto’s run, and is very accurate to her vision. I noticed Cat Yronwode wrote a letter in #13 affecting not to get the greater picture

The vat of blood was interesting from the archetypal Sonja-as Kali viewpoint. Blood goddess, Red Venus, and another pass at “scarlet wine” ( my favorite Sonja speech ever, from Conan #23)> But it was a little.. outre, to say the least. The blood imagery of #2 10 and 11 pulls deep psychic chords in any woman, yet I was again wondering why. Why did the centaur smear his blood on Sonja’s eyes? Why did Narca kill the Big Birds and tumble them into a vat of blood? Why did the heart’s blood of one of the birds cure Sonja’s blindness?

I have to agree that “Red Lace” – the cycle set mainly in Apah Alah’s palace from #s 10-13 – is very tricky indeed, and it may pay to pick-out a few choice bits more or less at random. The notion that the “evil” centaur is Vulcan to Sonja’s Red Venus is very appealing to me. The eggs that the centaur blows are objects of surpassing beauty 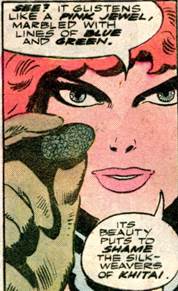 .. objects that later birth the rocs

Though the centaur blinds Sonja, the heart’s blood of a dying roc later restores her sight. The blinding perhaps symbolises a process of rebirth? Noto seems to deal in primitive concepts, and Sonja’s ordeal in the sac of blood resembles an imago emerging from a chrysalis (lifecycle).

When Suumaro asks the mystic emblem for knowledge, it transports them to a pit where “crimson and violet-hued plants grow profusely out of ebon volcanic soil.” Probably Apah Alah has perverted their growth and now they thrive only on blood. When the emblem is lost, the evil dissipates, the treehouse crumbles, blood stagnates.

In that moment of destruction, Sonja is again reborn 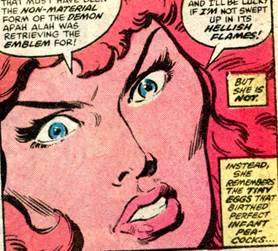 The egg, the lifecycle, the female serpent of intuition. If you accept that nothing is that clear-cut in Noto’s narrative, why should things be that clear-cut? As I keep saying, there are two universes; one is the convincing one of “facts” (the sun, electromagnetism). Convincing because it’s half a universe – that’s why it’s convincing.

False data is convincing and logical, and occupies a parallel system – like CERN. The guys are hubristically sure of their facts, that they get from the sun or electromagnetism. The problem being, the other universe – or the real universe – is much vaguer. One has to place one’s trust in vague signs and portents, as Tros does at sea sailing the Liafail. By trusting in the untrustworthy elements and nature gods, Tros gains a confidence unknown to modern Man.

It is a type of reckless spirit, perhaps not the equal of Howard’s bloody minded gusto, but getting there. Modern Man is “l’homme nerveuse”, whose facts make less and less confident, rotten in spirit, prone to paranoia. When you see a picture like this twilight scene at Machrie, Arran 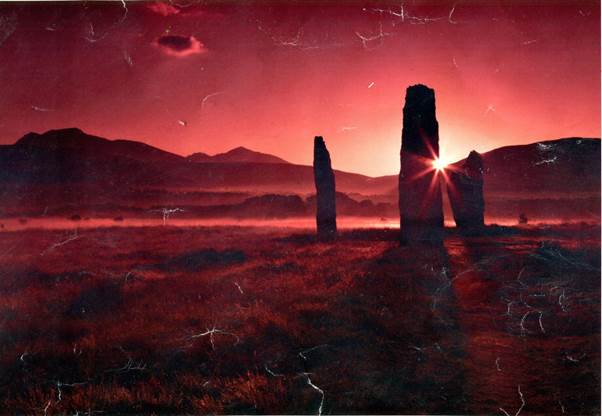 there is almost a Homeric sense of the eternal recurrence – another day, another night, on and on (Cat Stevens’ Morning Has Broken, clichéd but true). What is the truth? It’s difficult to pin down; it has atmosphere, ambiance, presence. It is what it is (“I yam what I yam”, Popeye). All you can say is it’s something that makes life worth living –  free as a bird (another cliché) or Tros’s Liafail.

This basically goes back to Alan Moore’s essay “Blood from the Shoulder of Pallas” (Pictorial 2), that facts make things disappear. Hubris says that all facts are right, but that’s only true if we live in a geometrical universe (Hyborian Bridge 13). If, as CL Moore has it the universe has “ambiguous symmetry” (Tales of Faith 12 Pictorial 7), then not all facts are right, since they only exist in a state of geometry (equivalent to electromagnetism, or a solenoid, a cylinder).

What actually does Musk envisage? Seemingly an electric-green, high-motile future of extraterrestrial colonisation. But of you go back a few hundred years to the landed gentry, what do you see? 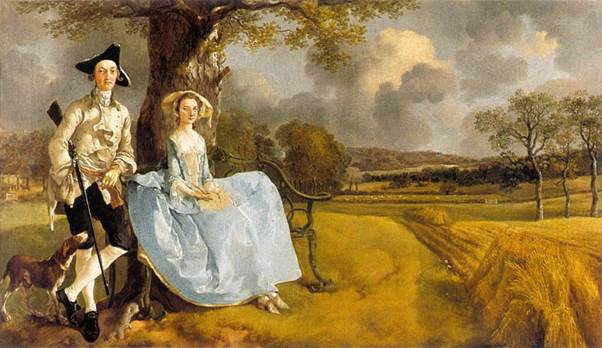 Mood, atmosphere and socio-economic reality of the fields, the weather, beasts. All the things that aren’t logical facts but that appear over the course of time if left to their own devices. That’s the other thing about Musk and Co. They are completely managerial, everything must be planned down to the last bolt. They are all sons of the solenoid for that reason; the moon is intuition and just a free spirit, something they would never know in a million years.