“Perfection is not an aim” was Lindsay Anderson’s phrase from the glory days of British Free Cinema (Alternates 3,6), one that perhaps reached its apogee in Tony Richardson’s A Taste of Honey (61), It’s not a realistic picture, the viewpoint is naïve, Jo and Geoffrey playing at being outsiders almost on a par to 2003’s Ghostworld.

A TASTE OF HONEY

I’ve always felt Ghostworld is unfair (Alternates 3) but, then, romance is not realism, it’s a dream. In a similar way, Jo and Geoff live a beautiful innocent dream for awhile. In Ghostworld, the regular guys make their terribly sensible, regular remarks like, “Get a job!” seeing as they’re studying for accountancy or media-type work to “subvert the system from within.” It’s all so sensible, even the Jew-baiting guy who calls Becky, “Your Aryan friend” is par for the course (bizarrely, Johansson actually is Jewish rather than Birch.)

Then the scene in the pub, Seymour doesn’t like the house-band Blueshammer (“pickin’ cotton all day long, I been ploooowin’..”) while his lady friend ups and starts jiving, which is the normal deal. Even the end of the film made out he was a complete failure, while Enid has lost her friend and God knows what her future is – the scene is enigmatic.

If you say that romance is dead, then the sensible people have it right and you have to play ball. Jo and Geoffrey’s naïve neverland has to end. However, it’s becoming clearer by the day that the “sensible” people are living in a half-world. In A Taste of Honey the lighting is natural and almost has a ghostly feel, interiors like a twilight hotel in some Neverland. Since you can’t see everything, it makes for a pleasing vagueness. In a world of fact, everything has to be convincingly real, stage-lit, and its very convincingness is a sign of its falsity. The “sensible” people, unsurprisingly, go to where the bright lights are, far from the nooks and crannies.

Again, in Ghostworld, Enid is totally knocked-out by Seymour’s lo-lit and moody interior with its antique nick-nacks. What it has are content and style, introspection and glamour. These are the things which a world of fact tends to wreck –modernity is half-baked and doesn’t have real content, or allure, glamour (see 30s Kaluta, Margo Lane and Lamont CranstonHyborian Bridge 12)

I did mention Weimar a couple of posts back, and the film Cabaret has weird affinities with A Taste of Honey. The gay guys who turns out to be flexible; the twilight land of dingy decadence; the seediness or lack of cleanliness (Joel Grey even says on the commentary, on wearing an old tunic, “Germans had a different notion of hygiene then”); the fatalism, devil-may-care attitude is what you could liken to sailors of yore, with a tart in every port – whether it’s Tros of Samothrace or Jimmy from A Taste of Honey. So it’s either 30BC Cadiz or 1961 Salford! The British navy may have been beefing itself up lately, but I’m not sure if the Merchant Navy still exists, to be honest.

Reading a review of a book on the Cretan labyrinth through history, I came across the quote

Myths have a habit of making discussions of them conform to their logics, such that many analyses of myth become in some way mythomorphic: myth-shaped. And so it is with Red Thread.. It is a book in which the path taken is, in line with its subject, uncertain. (Tim Smith-Laing on Red Thread by Charlotte Higgins, DT Review 11 August)

This got me thinking. Smith-Laing is our finest Cretan classicist, and he goes on

Much hangs on things being a little like other things that are like labyrinths. This covers not just tangled beards and winding railways but, in the end, almost everything: as Borges taught us, a library is like a labyrinth, and also “like a little world”, and a labyrinth, in turn is “like a book”, and “Epic poems are like woods,” which are “like the Underworld”, and so on.

So, a maze is uncertain, and can be almost anything (in nature). I think that is another way of saying that the illogic has its own logic. An alleyway that twists and turns, or a Chinese hutong, do not conform to logic; they have their own logic (“The illogic borrows from the logical”, Corneille – Pictorial 2, 4). Then I read a piece on Haussmann, who redesigned Paris in the 19th century in to its familiar boulevards. In the process, the quaint picturesque squalor was obliterated.

Then I ran into the 30s Chrysler building by Van Alen 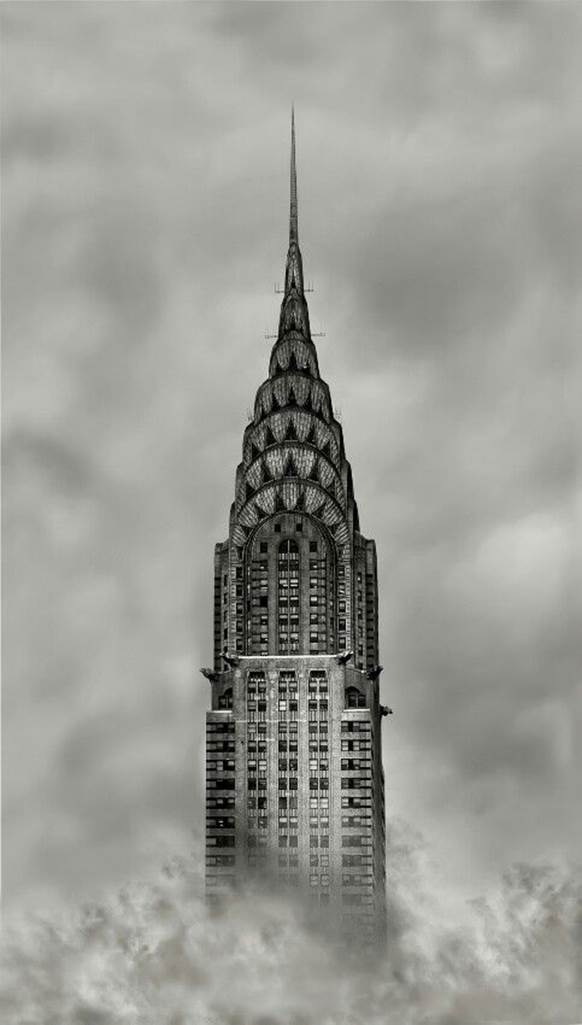 “They” don’t like 30s art-deco skyscrapers or icons of that order. They just want order. But order eventually becomes logic – and logic has no internal logic. There is no internal basis of symmetry, balance and proportion. The illogic has a natural order that “borrows from the logical”. Pure logic doesn’t exist: that is the modern maze. It is not the labyrinth of Crete. It is a maze without meaning.

Haussmann revamped a sprawling, slum-dwelling Paris positioning aqueducts and sewers with precision. The boulevardian, spoked-wheel design later influenced New York’s Moses. Fine, but New York used to be run-down (even if it actually wasn’t) and now it’s pretty much a police state. What does being run-down mean? It means that is how it appears over the course of time, if left to its own devices. No managerial oversight, self-organization and, yes, the other side of the tracks.

You can call that labyrinthine in the Cretan sense, a type of uncertainty that pulls you into the city. It has the thing all modern things don’t, which is introspective content. Tim Smith-Laing, I neglected to say, did mention the brain as another type of maze. But none of that is the modern maze which is devoid of content – how so? Because Haussmann – and other city designers such as le Corbusier – have an aim of perfection. The straight down boulevards  and the straight up “machine for living in” – beautiful artefacts of 19th and early 20th century.

Yet the perfection is never achieved – that would be death (Weird 8 Korvac). You may have noticed Smith-Laing mentions also a wood, a book, the Underworld? These are living things – trees, authors – that die and go to the Underworld. It is decadence and melancholy. The modern maze knows nothing of that, and therefore nothing of life and fertility. Nothing of Artemis, the huntress of the moon; nothing of Diana who runs on the moors with her hounds.

The modern maze is a maze of existence only, not of life, for what is life without death? Mere existence, like a machine that gets switched off. Meaning, or content, I tend to say, aren’t planned things. Once everything is planned nothing is uncertain. Therefore, the labyrinth no longer exists, the age-old legend of entanglement.

Going back to A Taste of Honey, Rita Tushington and Dora Bryan in the commentary say things like, “the floors were crooked”, “those buildings have been knocked down”, “that’s the dead dog canal”, “that’s gone now”, etc. Living without meandering squalor has no labyrinthine quality. I’m not against smartening and tidying things up; I am against planning that is death to meaning. Why be born into such a reality? We are children of the dream of the universe.

It may help to have a visual context for the maze? The Miss America contest, you may agree, relates to symmetry, balance and proportion of the body and head. The mechanics of it are quite difficult to alter, though the institution has been going through a rough patch and audience falloff.

The social pundits feel it’s a dead dog, and John S Quelch (of Miami Business School) had the temerity to say,

The salutation “Miss” is entirely anachronistic. Meanwhile, in an era of increasing demographic diversity, America is no longer the unifying cultural rallying point that uses to draw large audiences. (DT)

That threw me a bit. So, should it be called Mz Thing? I’ve nothing against academia – they have a job to do, and whether it’s Peter Quennell (on Byron) or Smith-Laing they do it well or better. A traditional academic uses the brain as a labyrinth, weaving tapestries of thought that have an inherent attraction. It’s the opposite of fact, even if they make use of facts. Smith-Laing’s comment on “mythomorphic” is very apropos of that.

By contrast, JS Quelch has no inherent view of allure or grace or glamour; he is merely analysing the “facts” of a “failing” show (Trump is so similar!) It’s a certain type of head (brain) that doesn’y think introspectively of graceful allure, but only of logical facts, in whatever context. They are the Martians, the disembodied heads of tentacled dominion. They have no concept of content (introspection) nor of style (allure).

That type of disproportionate head is the modern maze, an egoslime of self-righteous delusion. You see it in Dawkins of the selfish gene; in Musk of “the logic of speed”; in Bezos of “the logic of buying”; in the dread Zuckerberg (“logic of sameness”).

It’s all a type of logic with no internal logic of proportion and symmetry. Ask Miss World. It’s a natural truth that they would be likely to intuit. Without internal logic there is nothing there in terms of proportion and natural grace. Introspective content and graceful style that you will find in a raven, harbinger of death and destruction. I guess that’s not friendly enough for “them”, so over to