“A feeble consistency is the hobgoblin of idle minds.”

Like Ralph Waldo Emerson, Nietzsche was too wise to aim at completeness. Instead, he relied on cadences that made sense with a directness that could be felt. The aphorism was his principle weapon.

Style ought to prove that one believes in an idea; not only that one thinks it but also feels it.

Like nature, how can one disagree with a grizzly bear or a rattlesnake? One can dislike them and seek to maintain order, that’s a different matter. Nietzsche will not impose himself on the universe – that is psychic weakness. He is not drawn to logical argument, but to style and content. The one leads to impotent confusion of goals and ends; the other may well contradict itself, but does so with the clarity of a wise soul. Poetry, like Byron, that speaks to the soul of Man.

Those who deal in logical argument and order are blind to poetry, which is why our dear leaders have no conception of the madhouse they are engineering. Without the primal rhythms of yore, the paranoid mad gods are let loose to impose their madhouse of uniformity. Erdogan, Putin, the increasingly paranoid Trump, Netanyahu and the “New Jerusalem”..

George Gershwin’s Porgy and Bess is an opera about a poor black fisherfolk community. Bess is sort of feckless and druggy, but they live a generally idyllic existence. This often doesn’t go down well – shouldn’t they be angry or something? Yes, but the point is they are a self-governing community, they don’t play by the rules of federal order.

Why should citizens reflect their robotic leaders, immigrants from some Martian plateau? America is Lil Abner and was Porgy and Bess. Where are the black share-croppers (like Joe Tex)? Chances are the’ve been swallowed up by monoculture and the $ - so they are the enemy; the wormdollar that is Trump’s sole means of measurement (is that why Daniels called him “tiny”?)

Being contrary, blacks are right to be rhythmic, simply because it’s wrong not to be. One watches plants grow in a fairly laconic deluge of stalks and buds, ants scampering around, then the rains come. It’s reality – like The Wizard of Oz –it’s fantasy, it’s not the uniformity that “they” claim is the goal of life; the neverending madhouse of insane topsy-turvy talking heads from Mars.

Fantasy is poetically real – whether it’s Hyborian kingdoms or 80s X-Men. Case-in-point, X-Factor, the 80s series, is predicated on Jean Grey’s resurrection from a cocoon placed in Jamaica Bay by the Shi’ar. When she touches a holempathic crystal (FF 286, Byrne) it replays the events on the shuttle when the Phoenix entity took her place in exchange for saving the lives of the crew. It copied her form exactly and 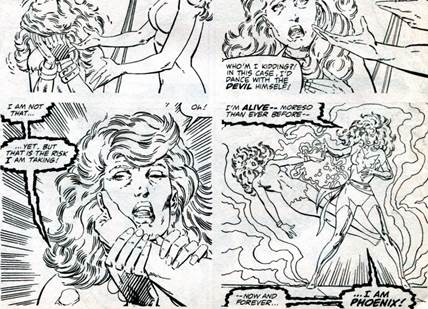 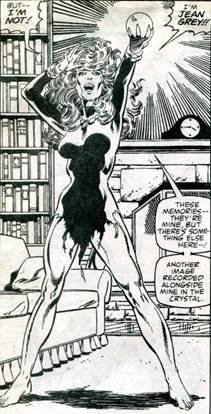 Jean’s spirit of love, duty and sacrifice defeated the evil the Phoenix had become (in the scene on the moon). The mystery is that a human soul can restrain the unbridled force of a cosmic entity. The emptiness of a cosmic lust for power is engulfed by the presence of ghosts of the past.

This is what a supreme sorcerer is – emptiness – because there are no ghosts. There are simply logical thought processes. Reed is very good at what he does, but he knows that analytical thought processes cannot solve the riddle of time, memories that haunt the present, that fuel the will, and that duty and honour will survive for that reason against all odds.

Reed is a scientist (like Hank McCoy) not a sorcerer, that is the difference. The sorcerer identifies with cosmic forces and becomes an empty vessel.. when they become Thoth Amon. Everything post-Einstein (in physics) is empty because the indispensable ghosts that are felt, that are empathic, are cast aside for the goal of a logical argument (being proven).

But that cannot be. For that to be so there would be no style that is felt (Nietzsche) and no content that is psychic, that is strength. This basically goes back to Korvac (Weird 8); universal order is the same as death, emptiness, blankness, weakness.

The city-state proves the reverse; it has order and it has freedom and the two are irresolvable opposites. In one place and in time. The search for order is the same as the search for ego-lust – which is the supreme sorcerer. Our entire globe is infested with this search which only exists in the ego of the searcher. Be it Trump, Netanyahu, Erdogan, Putin – they’re all identical in that context.

The fool is someone who sees reflections of reflections.. all of which are equally real. This fate befell Storm in X-Men #220, who is fooled by a world-devouring Trickster – adopting the guise of Cheyenne shaman Naze – by Forge’s own machines in a universe of Ororos. 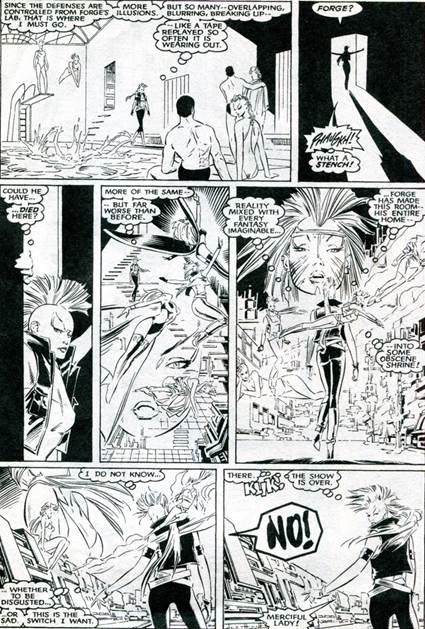 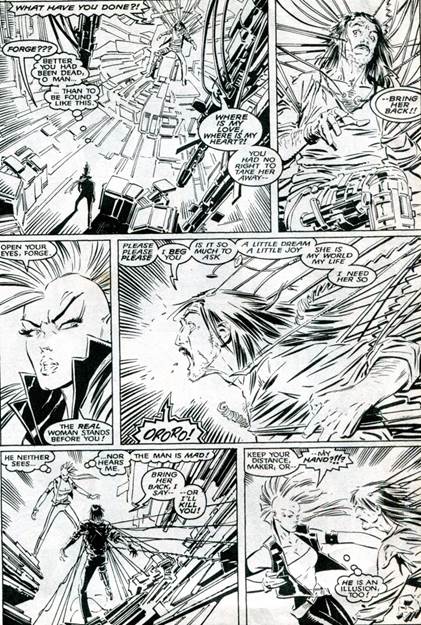 The ego is in a reality which only exists in its own ego, and searches endlessly for the same sad reflections. The reflections of an order which can only exist in the ego, entrapped by ego-lust.

Forge’s sordid “reality” (fantasy) is to entrap Ororo on a fool’s quest. The same cannot be said of the mad gods who promulgate endless reflections of their ego-lust for order, an order which can only exist in the ego. One has to forget all about conspiracies, as there is an a priori question: what is fantasy, what is reality?

The Trickster thrives in an atmosphere of reflection of the ego (where fact blurs into fiction), instead of one of communal rhythms, habits and manners, as in Lil Abner, the Tower of David (Pictorial 31), Jane Austen, Cheyenne villages, Puritan settlements (Indian Summer Alternates 7), old NY districts (New Medievalism Bardot)

If politicians and sorcerer-scientists live in a fantasy world of their own creation, that’s their problem. We do what we want, which is to seek the perfection of freedom.

Anything that seeks order is by definition imperfection because it goes against primal lusts, primal rhythms and primal appetites. For example, I bought a portion of take-away chips the other day. In amongst the chips was a whole, throat-sized potato. It stuck half-way down and only the rippling full-throated expulsion of said matter saved the day. How can one care about logic when it’s a matter of life and death? Only primal forces of sinuous muscle matter when survival is at stake. What goes for the human body goes for the freedom of primal forces found in the commune, or the city-state of yore.

Why are we supposed to think that rhythm only applies to sex and everything else is pure order? Because “they” tell us so. The reverse is true: rhythm is freedom from order. Their “order” is a nightmare of the soul, an inward-turning of the ego into a phantasm of ego-lust. The ego is helpless without the muscular, physical forces of the body; without the serpentine spine it is supine.

“True love is a city built on endless dreams”