The notion that reality consists of warring opposites is as old as Zarathustra (Nietzsche). The notion that seekers after truth become entrapped by sorcery is as old as Hyboria. In other words, by seeking after truth one goes instead into the world of the sorcerer, where truth and lies are part of the same deceit. Forget all about conspiracies; the human brain is a fallible instrument (as Alan Moore says, no one is at the tiller, which is far scarier.)

The truth of science approaches nothing because of its failure to recognize that the opposite to order is freedom; that Man the hunter lusts to kill his prey; that meaning is figurative, not logical; that figures in a landscape have a primal simplicity that is felt.. and this is where style meets content. See BWS 70s prints “Something Ic Waes” etc.

Logical argument destroys all that, as surely as the Nazis did the age-old culture of mitteleuropa. It’s intellectually not possible to understand the modern order because that’s what “they” want (like watching The Simpsons on an infinite loop!)

Simplicity is called for; from that comes meaning (one can try to understand something that’s meaningless – why bother?) The axioms of science have led to the point of nothingness. That is the conspiracy; no one is to blame apart from the fates conspiring.

CL Moore’s Martian tales linger over the drybed regions of the dead planet, the age-old wharves where polyglot tongues are forever burbled in shady courtyards and inglenooks. It reeks of decadence. This is Artemis, huntress of the moon, who goes where the sun goes not. The shady groves or the shady streets are all the same to her. Artemis is the cycle of life that kills in order to transfigure reality (prev. Ororo – to hunt, to survive).

Artemis is the diametrical opposite of order – order is the sun. The two are incestuously close, and that is the origin of the city-state. Rome, for all its grandeur, was just as fetid as Jerusalem (Hyborian Bridge 19 20. Shafts of light from on high, the hidden draperies and cracked stairs to subterranean caverns, revelry and dances amid the worship of urban Surtr.

All of this is the opposite of order (sun) - physical perfection in time and place, lifeforce, lifecycle, death and rebirth, spirit, ghosts. What we have nowadays is a type of nothingness of order – be it iphones or CERN or genome – the seeking after truth which leads to a world where truth and lies, fact and fiction are the same. The world of mere existence - mass (M) in a material world of energy (E) that is litup (C, electromagnetism) squared.

You’re sayng iphones and CERN and genomes have no connection? Everything is leading to AI which is pure electromagnetic order. Everything is contained in the equation E=MC2, that is the only thing the guys at CERN are investigating. In their universe of light that equation has to be correct: all their results are convincing proof of that fact (double-checked by AI).

In the universe of time and space, decadence and dilapidation occur. Artemis is let loose upon the world and the lifecycle of soil and soul around the city-state, the hills and grasslands where the baying of hounds is heard beneath the dazzling moon.

Light is destroyed by night and that is a perfect cycle. The sun is a destroyer: in Strauss’s opera Daphne, Apollo feels no compunctions about blasting Leukemos, his rival, to a cinder of burnt meat. The guys at CERN are oblivious to the destruction of pure order because to them it is truth.

Yes, a truth of verifiable facts that convinces the ego; not a truth of time and space where facts do not have dominion, where the moon also rises and where darkness settles upon the land. “A land of darkness and deep night.”

We are in Hyboria, the land of time and space and not of mass and energy. No sorcerer can have dominion over the noble outlines of a city-state (or a warrior). Order of the supreme sorcerer is diametrically opposed to perfection. The sun reflects with convincing results – these are the verifiable facts that flatter the ego: energy (E), speed of light (C) and their relation to mass (M)

The more convincing the result the more that equation will be substantiated, the more the ego will be flattered, and the more fantastic delusions there will be (fact equating to fiction). Apollo – appearance (idealism) – takes the place of realism.

What you see in the pictures of the shtetl are simply daily scenes that are not run by mass and energy: there are no goods being processed, no travel, no service industries like advertising. What there are are buildings – ancient and timeworn – people, small tradespeople and an agrarian/herding landscape that goes back to the dawn of time, practically.

Because there is no dominion of order, everything happens with a looseness and grace that, again, goes back to the dawn of time. That’s why the scenes are so reminiscent of Hyboria 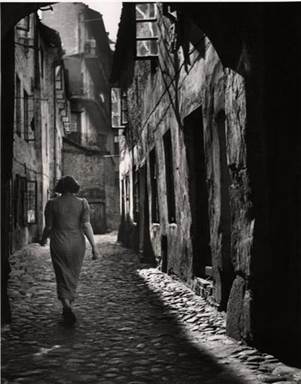 They are natural and graceful and there is lot of disorder, higgledepiggledy lines, shambolic streets, the rural and urban melee. Now, obviously that contains animals and plants. In the modern world “they” are building a genome database of all species as a way of “safeguarding” the future. In other words, the “verifiable facts” of the genomes flatter the ego, in a society of the head.

In the ancient world (or the Wild West), looseness and grace of Man and animal in communal settings were the order of the day; the primal rhythms of life are what you see in these old pictures. Modern Man flatters himself that only information is needed, and so no more natural artistry. All you get is a lot of facts that are also a type of useful fiction.

No offence to Einstein, life cannot be ruled by any equation; action is something that takes place in time and place and has skill and artistry. Man the hunter, warrior, the introspective adventurer of Weird Tales. As mentioned in Tales of Faith 11 – under Cerberus – Howard’s fantasies, like CL Moore’s, are pretty naturalistic and Artemisean; fetid and floral descriptions pf the huntswoman’s domain are commonplace.

Nietzsche – as is well known – put the lusty Dionysus centre-stage in The Birth of Tragedy. The primal female – Belit or Jirel – on dreaming seas or nightborne landscapes (Pictorial 7) are probably more indebted to Artemis. That could be a distinction between the American Weird Tales or the Wild West with Europe’s arch-romantic, Nietzsche.

Having said that, Howard didn’t identify with any philosopher, and Artemis is mainly a mystical counterpoint to the egotism and order of Apollo (see BWS “Artemis and Apollo”). The pungency of mysticism is something that runs like a red rage through Howard’s historical tales of Outremer. In The Sowers of the Thunder, Saracen and Frank defend the ruined walls of Jerusalem from eastern hordes

The words died in his throat as he looked at the ruined walls. Truly an hour more or less could have no significance in that doomed city.. The mullahs rallied their people, and for the first time in all history Moslem and Christian joined forces to defend the city that was holy to both. (Swordwoman, page 270)

“Wounds of God!” he groaned. “They are burning the Sepulcher!”

“And defiling the Al Aksa mosque too, I doubt not,” said Akbar tranquilly. “Well, that which is written will come to pass, and no man may escape his fate. All things pass away, yea, even the Holy of Holies.” (page 275)

The blood-sacrifice of men of faith for a place that is not just stone and dirt. What is the mass (M) and energy (E) of the ruined walls? Meaningless question. The warriors are defending a shambolic terrain that is known to history. Blood is their pilgrimage. If the hordes represent mass and energy of destruction, the faithful represent duty and fealty to this place for all times. What else has meaning?

Leagured all about, the Christians fell fast, but even in dying they took bitter toll. Back to back, in a slowly shrinking ring facing outward, about a rocky knoll on which was planted the patriarch’s cross, the last of Outremer made its last stand. (page 286)

THE BOY WITH A MOON AND A STAR ON HIS HEAD