The prophecies of Rachel, verse 55.

Separated by the gulf of their identities, the two clambered down the rocky face, through the mistyghostlings of long dead spires and were nearing terra firma when an ebony vision flew into view. Rachel threw up her arms and screamed.

“AEEE! What Dark Tomorrow is this? A winged demon..AIEEE!”

“Come hither,” the thing lisped, indicating it would carry them both in its outstretched claws.

The two glanced at eachother, and a delirious agreement shone from their eyes. They both sprung together, trusting to the thing’s inhuman vitality to bear their weights. Sure enough, they soared aloft with unholy ease, and Rachel couldn’t help laughing with gay abandon.

“Ha, ha, ha! What Savage Tales could trip from those lips!”

“Ha, ha..WOOER!” the entity was having the time of his life too, ‘til the demon whirled kite-like from its lofty flight, and descended at colossal velocity. The two were stretched out behind the winged form, wind forcing their eyes shut.

Anything dilapidated or unkempt represents the revival of Artemis and the cycle of life that kills, that destroys entropy; Diana and her hounds pursuing the deer through the woods 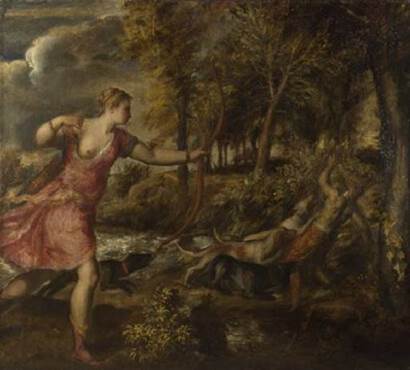 Titian, The Death of Actaeon (The Big Pretence)

Night and the hunt, the maidenly pursuit of animal flesh through shady groves – the destroyer of light by photosynthsis (Pictorial 25 Daphne). What seems to have escaped the ego-merchants is that the sun is a type of nothingness; energy without the cycle of destruction that occurs here on planet Earth in her green forests and with the hunter’s keen blade 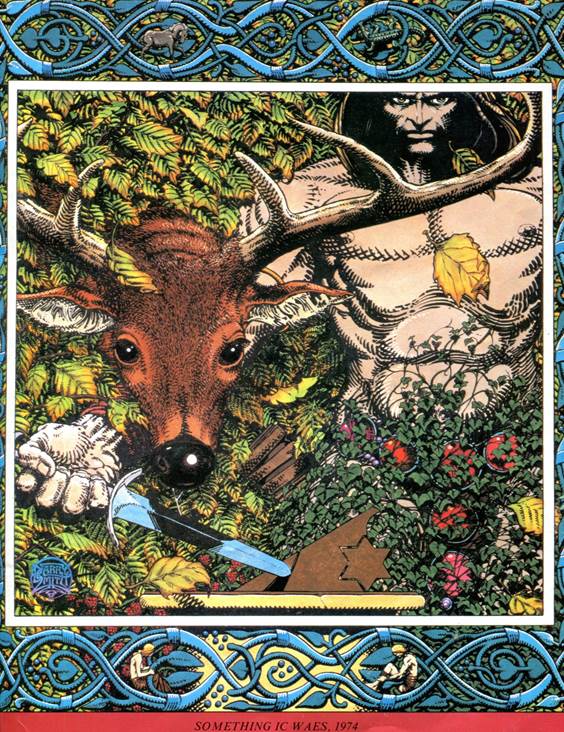 The image is of psychic and physical strength – style that is felt, content that has meaning – hunter and prey. Our societies are psychically weak – no hunter, no prey. What it produces is entropy or energy (same thing). Bill Gates was extolling the virtues of his pathogen-killing toilet that provides clean water in today’s urbanised, water-scarce societies, and made the statement that a beaker of excrement contains

Yes, but these types always think with their egos; they set-up a problem and then solve it (like Dyson, Dawkins or any of their ilk). In actual fact natural processes are 100% sufficient to break-down pathogens because nature is a predator/prey situation. The soil of a wood contains humous (organic-mineral decomposed matter), worms and water and bacteria and fungoids that break-down and recycle pathogens in human waste. Soil or compost are ideal mediums, and provide cyclical strength that is the basis of a rural existence (Adastra in Africa Tales of Faith 2)

This type of life is strong – psychically and physically. Urbanised life is weak unless it has the resources of a rural base. Gates is thinking with his ego, and that is a type of weakness: the ego requires problems to solve – with the ego. That’s why he reels off these seemingly intractable pathogenic problems that any good compost clears seasonally with the rains.

The BWS image shows a predator and prey – hunter and deer – a situation where one is eaten and there are waste products. The difference is this is a situation of strength; they are in a leafy wood, one where the soil is fertile and strong.

There are basically two universes. One has a fabric of poetic rhythms and muscular exertion and is psychically strong. The other is governed by ego and is psychically weak. The former exists in time and space, like Hyboria. The latter is defined by E=MC2 or the ego of the supreme-sorcerer. Now, you could ask, where do the poetic rhythms come from? Well, they come from order – sun (Apollo) – in a very close relationship with the destruction of order, Artemis (see BWS print Tales of Faith 9)

Einstein’s equation doesn’t refer to the destructive component because it is an equation of order (ego). The two universes are there displayed in the two photos at the end of Hyborian Bridge 30, one by Cartier-Bresson of a dilapidated Greek colony, the other a Trump-ad of a dilapidated seaside town (actually in Sussex, UK!) One is revivalism, Artemis, lichen and the spirit of Man; the other represents “real estate”.

The Greek colony is always a mixture of the planned and the unplanned, so that the shambolic adobe hillside hovels have realistic people who could have stepped out of the Odyssey. Never try too hard, is the adage, mirroring Callas’s quote on singing, “think.. but not too much” (or Bruce Lee’s action without prethough Americana) The shambolic hotchpotch of colors and textures is living poetry and so destroys entropy.

This is the freedom that comes from classical order that Hellenic expansion brought to the eastern Mediterranean. These two aspects are always present, whereas modern “real estate” is just another word for order, logic, fact. In the past –CH5 Bardot– the internal logic of self-government was allowed free expression in NY tenements and ramshackle neighbourhoods, Cannery Row (Steinbeck). Now “they” turn it into real estate that has the same value throughout; the wormdollar of AI, Amazon House, genome database that always approaches zero (CC Beck, “they sell containers with nothing in them”, Pictorial 18).

The zero of a Master Mold that is entropic that doesn’t allow for free expression with no forethought. Entropy is just the expression of E=MC2 for a future that is litup by AI – electromagnetic order - the tentacular heads pay obeisance to the Master Mold of entropic order – heat, fire, sun – see Hyborian Bridge 25

We live in a world of heat-pumps and not one of the destruction of heat by Daphne (laurel, Artemis) that is cyclical strength in the forests of the night. I don’t suppose it’s escaped anyone’s notice that mammals are warm-blooded? In other words, the body is self-regulating thermally. Have you ever wondered then why we need all these heat-pumps in shops and public buildings?

The answer is that “they” need them for their cold-blooded inhabitants – serpents – whose heads pay obeisance to the Master Mold of entropic order. Everything under the aegis of the supreme-sorcerer is a reflection of electromagnetic order – see Hyborian Bridge 21 Faraday-Relativity.

Reflections are reflections of the ego, like Forge’s sordid illusions (Hyborian Bridge 28), convincing to the ego but always lack power – psychic, physical. It’s the difference between today’s anodyne sexualised pop and 1968 Quicksilver, Live at the Fillmore, “primarily a dance tune”, they say at start

“Stolen fire from the sun” (Prometheus)

Primal power is Daphne, the destruction of sunlight in the fabric of a wood. Why was Prometheus bound? That’s the answer. The ego has to be held accountable to the power of a dance, the satyrs of the grotto, the gay abandon of the soul.

Daphne is called Daphne-Artemis in Greek myth, the explicit link to solar destruction, regeneration, nightfall, the hunt, the kill, blood. Almost the same could be said of Howard’s Hyboria, so I hope you don’t mind if I pen the name “Hyboria-Artemis”. Artemis is the poetry that is sorely lacking in a world of convincing reflections – appearance, not reality.