The prophecies of Rachel, verse 60.  They awoke atop a knoll on a green sward, cyclopean stones of yore in a rough circle round their bedraggled forms. They staggered to their feet and Rachel stumbled towards a toppled stone, motioning with vague arm movements.

“The winged one! See the glyphs?”

“Seems like it dropped us on its shrine and then departed. Where be we?”

Rachel glanced around and raised a delicate arm. “Over there’s the cliff-face. This is the hill of Hyborian Hosts, an unexplored area dead in the centre of Argossa, and.. oh.. I hadn’t noticed that before!”

Speaking thus, she sidled down the steep incline to the edge of a majestic moat, brimfull of bilious green water.

“At least you’ve no chainmail to wear you down.. still”

“Don’t moats tend to have drawbridges.. if you assume a castle once stood at the top?”

“A castle.. or a knighted temple to the winged one? Still”

So saying, they sauntered round the water’s edge and presently

“There she be! A cast-iron bridge, or my name’s Raquelle”

AS they stepped on the rickety construction, the entity pointed

“Not cast-iron, wooden I think”

The moat was wide, the bridge was narrow, and as they passed over the hump they were astonished to see a figure approaching. The guy wore a brimmed black hat somewhat like a Rabbi, and his entire costume was black, apart from the glint of a sabre projecting from his jerkin.

“This bridge ain’t big enough for the three of us.. just kidding! You’re ill equipped to be abroad this night of all nights. Have you knives?” He beckoned them forward. “Then come hither..”

Conan stared in wonder at the cold classic beauty of that countenance, whose like he had never seen among the sons of men. Neither weakness nor mercy nor cruelty nor kindness, nor any other human emotion was in those features. They might have been the marble mask of a god, carved by a master hand, except for the unmistakable life in them—life cold and strange, such as the Cimmerian had never known and could not understand. (“The God in the Bowl”)

Howard’s description of Thoth Amon’s emissary is pitch-perfect for the god of appearance and not reality, for the awful reality is that, “the god has a long neck.” If you apply that to our supreme-sorcerer, what might it imply?

If Daphne-Artemis is the poetic lifecycle that destroys light (HB31) in amongst the decay and compost that plants thrive on, the serpent thrives on the sun and requires heat. The long-necked god has to be something that thrives without Artemis, without the shady, fertile areas that harbour hardy foliage and cyclical activity on the ground.

Daphne-Artemis is poetic activity to do with seasons and the balance of sun and moon. In Howard’s Hyboria there is muscular activity – the warrior with lightning-fast nerves and reflexes. But the warrior is in the forests and mountains and seas of the night, and the balance is palpable with the likes of Belit.

I think Clair Noto takes this even further in “Red Lace” (Sonja 10-13 Aspects 3) with the temple of blood carved from a sorcerous tree. Earth-power, blood, death and rebirth – the romantic sense of decadence and the sense that one can never have beauty without decay.

None of this applies to our supreme-sorcerer, so you could say a long serpentine neck is a very good metaphor for a world that is both infertile and inhuman. The head is set atop the long, coiling neck that is detached from the lifecycle of Daphne-Artemis and that needs constant solar heat. Because it’s divorced from Artemis, it hasn’t the strength of fertility (loam, compost) and so depends on the head to solve problems relating to fertility. A good example is Bill Gates’ pathogen-killing toilet (HB31).

Instead of the strength of loam and compost, we have the weakness of ego where all problems are relative to the ego. So, is that related to Einstein? Yes, because it’s all solar power as distinct from the balance with Daphne and natural composting processes of strong, fertile ground. Gates – like Brian Cox or Steve Jobs – is an acolyte of the supreme-sorcerer where problems are relative to the ego (or electrochemical impulses). It’s a weakness because Earth-strength which is real and cyclical is taken out of the equation.

I don’t like to say it, but when Gates had that beaker of excrement beside him, that’s what he was speaking. It’s a visible weakness that attaches to the ego. The ego becomes detached from the fertile currents of nature that are real and strong and don’t need Man’s rule-based solutions. The solutions are based on weakness, and connect the ego to weakness, in this case the beaker!

The weakness of the ego rejects the delicate and faunlike dances of nature, the groves that are not ruled by Man. This is why you could say Gates & Co are acolytes of Einstein, that everything is relative to electricity, or electro chemical impulses. In the Conan comic, Roy Thomas took Howard’s man-serpent from “The God in the Bowl” (#7) and later added his serpent-headed men from Kull, who are servitors of Thulsa Doom. These latter also appear on Conan #89 as acolytes of Thoth Amon 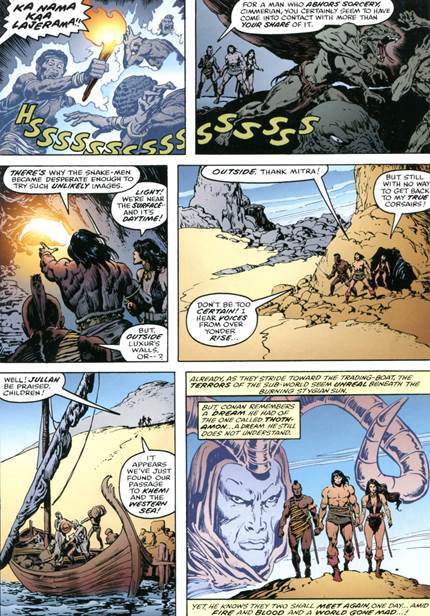 The image of a serpent-head is quite a good one for those who are tied to serpentine thought-processes; that everything is solar and nothing is active on the ground of Mother Earth, the compost, humous (decayed organic-minerals), fungi.

Fungi is the best link I can think of to Quicksilver who, as Gary Duncan freely admits, wrote songs while high and never came down even on-stage.

His head is so big

The more you put in it

The more it’s a gimmick

So go back in time

.. It’s rough, but no routines or rules (the wildest drum-solo of all). The basic point is that if everything is rule-based routine (see Bruce Lee Americana) there can be no gay abandon – the Dionysian wildness of the groves. In Quicksilver’s case they’re wild men of the wild west, free spirits, Dave Freiberg makes a cool Satyr.

A cool wind whispered through the green woodlands. A silver thread of a brook wound among great tree boles, whence hung large vines and gayly festooned creepers. A bird sang and the soft late summer sunlight was sifted through the interlocking branches to fall in gold and black velvet patterns of shade and light on the grass-covered earth. In the midst of this pastoral quietude, a little slave girl lay with her face between her soft white arms, and wept as if her little heart would break. (Weird 10)

By that token, the strong man and the strength of the grove are entwined in Howard’s prose. BWS, in The Ram and the Peacock, played out a similar theme whereby the barbarian is an intruder in a refined garden, the wizard the “fallen hero” at his feet (The Studio) 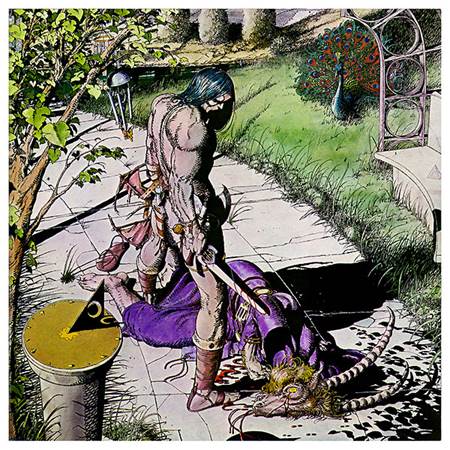 Another way of loking at it is the fallen wizard is akin to Zukala (of Zukala’s Daughter) or Atalis (of The Hand of Nergal); not a supreme sorcerer but a student of nature with his apothecary and almanac as well as arcane spells. Wizard and warrior sometimes get together, but in today’s rule-based world the wizard stands for the weakness of an ego that the rough and ready warrior needs to down with an axe.