The prophecies of Rachel, verse 105. Rachel, with her exotic, neo-Platonic looks, became the PR for wave after wave of airborne invasion, as the hilltop fort became the centre of operations for “nouveau shtetl”, the prototype rural empire that was to be won by relentless raids on neighbouring stock.

The demons struck by night, each capable of lifting a cow with some care, a sheep with ease. Stud bulls had to be knocked-out and then two would grasp a horn each. Rachel had come to believe in the cause, and was not put off by the blandishments of media-empires.

“Romania is reeling from an expansionist invasion of rustlers by air who claim ancestral rights dating from the fall of the Austro-Hungarian Empire. CNN is reporting live from a resplendent chateau at the heart of the brutal invasion of..”

“Mrs Entity, many would give their life-savings to occupy such grandeur – and that’s what you are – occupiers, isn’t it?”

“Yes, reoccupiers actually. Natural justice says that if we have the strength to retake what once was ours, no legal impediment should stand in our way.”

“By “strength” you mean rapine, pillage and livestock rustling on the wing?”

“Listen, my people – the shtetlans – were illegally forced from their land and no law of Man can stop them from retaking what is rightfully theirs. It’s rough, it’s tough, but it’s not gonna stop.”

“What are these demon things” Drones? Are you Israeli intelligence – Mossad?”

“Baby, we’re the romance that Transylvania has lost. We are reality, and reality is a dream”

I wanna go back to “New Medievalism” – the section on the contents page – specifically Bardot. The sense that America in its historical state is life and death on the prairies of Texas and meat-packing yards of Manhattan.

As it says in Bardot, the tyranny of order – by political acolytes – is just the face of Apollo. A real society has a psychology  – hunting, riding, lassoing, butchering – tied to the rhythms of nature. This is a reality that Trump and Co cannot observe because they are tied to the dollar – it’s their sole frame of reference. And the dollar is tied to the illusory reality that heads into the heart of the sun. Specifically, Swiss banks, photon-AI and the rest that are tied to the supreme-sorcerer (reflections, or Faraday-relativity – see prev.)

The dollar has become just a reflection of this solar universe – outside of the strong rhythms of life and death (on the prairie, in the meat-packing districts). The visceral sounds, smells, sweat, dust, gore that are the physical aspect of a real society – that America was. If you have a look at Bardot I think you’ll find that sense there.

The dollar is now the enemy because it is simply a reflection of Einsteinian space – which is a grand illusion. Society has psychological roots, and dramatic form. This was brought home to me reading X-Factor. Apologies for the constant referencing of X-Men but it was completely news to me how Louise Simonson had concocted a sort of psychodrama out of Scott’s infatuation with three incarnations of the Phoenix. That is Jean as Phoenix, Maddie, and then Jean reborn, as..?

In this scene, he realizes she has apparently not been reborn as Phoenix 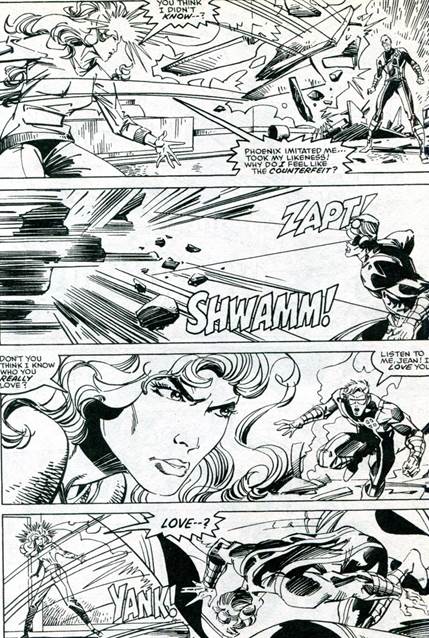 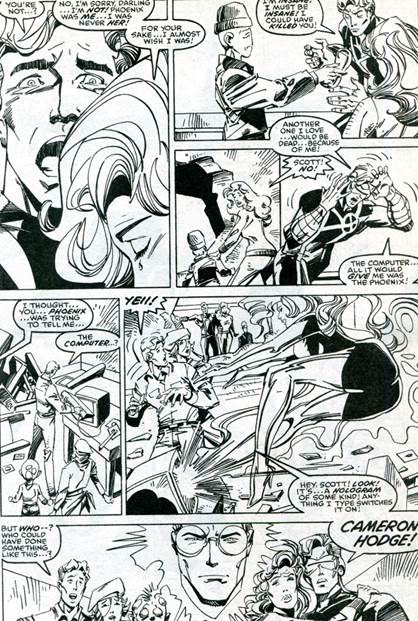 As Scott says in #19, super powers are able to express themselves dramatically! That’s so true and I think underscores the psychology at the heart of any real society. It’s Greek drama. Louise picks this up and runs with it. While the X-Factor are like an extended family of weird and wonderful lifeforms (Greek myth?), their PR Cameron Hodge it gradually becomes clear is a sham, hypocrite and just a typical politician.

His deception is uncovered – holograms of Phoenix to assault Scott’s state of mind (above). Since X-Factor is itself a sham organization – mutants masquerading as mutant-hunters – it makes the interesting point that Cameron Hodge – being a sham or hypocrite – is well-suited to running the show without being uncovered, till later.

The reality of the situation is actually the fight between Scott and Jean – anything else is not real, it may be an illusion or a state of mind. Hodge plays tricks with these perceptions. If you recall (Hyborian Bridge 28) Storm was tricked by Naze using Forge’s holographic pseudo-reality into believing he had a sordid obsession. It’s easy to trick people where the illusion is very good and also distorts psychological truth. What is psychological truth? It’s the scene between Scott and Jean – violent and primitive, love and hate all together. That is the basis of a REAL society, and anything else is illusory.

Cameron Hodge is a good representative of someone who plays with illusions. Since X-Factor is itself a sham, it makes the point that illusions are more convincing in an illusory reality! Again there is the idea of reflections of a reflection. What is real is the basic psychology of a society – the hunt, the chase, the Dionysian wildness of primordial rhythm, percussive beat. The city-state in history and Hyboria.

The stage or drama that takes place on the comic book page tells us what psychological reality is – it’s real, whether it’s Kirby’s New Gods or Louise Simonson’s X-Factor. There’s an unthinking freedom in the linework, and from that freedom thought flows, with grace.

This goes back to Bruce Lee (Americana) and also the quote from Liza Minnelli (Bardot) – there is always an unthinking expressive aspect that cannot be systemized, that can’t be made into routine, that simply takes place in place and time. It is the lustiness of Old Harlem, the zest of the Old West that is not order. It is real, and anything else is an illusion.

If rational societies are based on an illusion then, yes, politicians and their acolytes can convince with yet more reflections of an illusion. A “New Medievalism” – like Hyboria – is based on what’s real. The psychological drama of Man living on Earth with lusts and loves.

The prophecies of Rachel, verse 107.

“Israel denies all knowledge of this European invasion by reputed ancient Yids of mitteleuropa. This was Prime Minister Netanyahu outside the Knesset.

“I ask myself, are these anti-Semites dressed-up as Semites in order to sow anti-Semitism? It’s crazy, madness, folly. I sanction any and all means to obliterate them from the map. There is only one homeland for Jews and I am running it.”

“Mr Netanyahu – Coral Armstrong, CNN – how do you explain their advanced technology, in the form of flying demons that seem to be flown by remote control? Isn’t this a typical Israeli stunt – Mossad?”

“Get that woman’s mic! Do I look like a stinking shtetlan? Burble burble..”

Rachel had been watching the transmission in the castle keep, and immediately flicked it off with a casual gesture, rolling her eyes at the shtetlan gathered in the ante-chamber that doubled as a common-room (somewhat like a boarding school), idly flicking hair that twined round her forehead fetchingly, from her eyes.

“Good for you, Rachel,” said one amid a chorus of approval. “We can fight our own battles without the help of stinking Israelis.”