The prophecies of Rachel, verse 95.

Following THE VORTEX OF MOONLIGHT the entire hill of Hyborian Hosts was shifted sideways in time and, by means of elemental chanting by the shtetlans, led by high priest Moshe, emerged at the time forecast by the astrological charts to be “a’changing”.

Due to the parallel shift, the two planes of reality were superimposed and the hill now bore a dilapidated Transylvanian castle. Immediately, the winged demons alighted on the turrets, and started roosting there, overcome by dizziness. The hill was now surrounded by a rocky gorge; the bridge was still intact though, now completely airborne and precipitous.

The hill had been rotating in space-time and the shtetlans were draped over the hillside nauseous, some vomiting. Only Moshe’s arcane knowledge saved him from a heaving fit, and he and the entity were the only ones standing on that moonlit hill.

“Whew! There’s the bridge.. amazing! Lucky it was we had the gang repair it..look at it hanging in space!”

Moshe had the dazed look of a stranger in a strange land, but his next words broke that spell.

“That bridge now stands as a bridge between worlds for – do you know where we are?”

“Well, it looks a bit Transylvanian to me.”

“It is Transylvania! The ancestral homeland of us shtetlans. Now we are back in mitteleuropa, to stay or die. And there..” he motioned towards the roosting demons, “there are the returning spirits of Transylvanian romance.”

You may get the impression I’m in favour of animal wisdom? This is admittedly true, some of it from Clair Noto’s fascinating universe of animal and human interaction. There’s the pure unicorn of The Blood of the Unicorn (Red Sonja #1) and the theatre of death’s vampire beasts from #4. 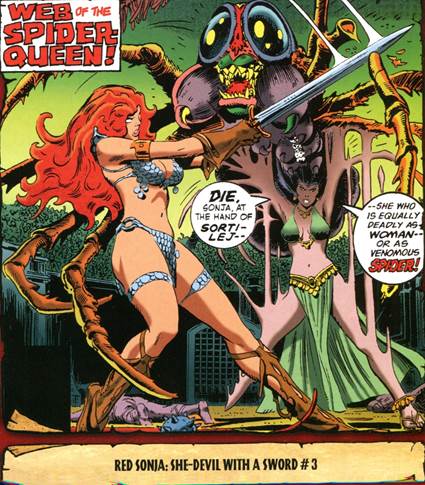 The whole of “Red lace” (#s10-13) is criss-crossed with macabre animalistic forms. The centaur who blinds Sonja with his blood (purifying her?) The androgynous winged demons who wear crimson-lace seem to echo the silent maidens within the enchanted castle who weave ornate white lace (sacrificially?) The rocs whose heart-blood seems to cure Sonja’s blindness.

Animals have the strength of iconic form; they are perfect expressions of type. If there is anything a priori in nature, we may sense it in animals. Animalistic poses abound in ballet and kung fu. There’s Rimsky-Korsakov’s opera The Golden Cockerel. This was a deadly satire on Czar Nicholas II who reigned when Russia lost a disastrous war with Japan. The Astrologer (Rasputin?) concocts a magic cockerel that crows to warn of war but King Dodon sleeps through it all. His seduction and deception by Queen Shemakha is pitiable. In the Japanese staging by Ichikawa, macabre animal forms perform a triumphant dance at the finale of Dodon and Queen Shemakha’s betrothal.

What you can say about animal symbolism or staging is it’s real. We live in a political-scientific time that is half fact, half fiction. In olden days, symbolism was real, and dream and myth had a place. Do you see where this is heading?

That is not what the powers that be want. What they want are psychic weakness and half-truths. Barn dances and unthinking abandon in the fields (as in the Biblical Ruth) are way too harmonious for comfort (Hyborian Bridge 6). They want a degree of unrest, a type of sham government.

So, anything to do with the reality of dream and myth is outside of the modern order, whether Right or liberal. That is just another way of saying the leaders of Israel are serpent-heads, as are our own. It’s a grand illusion that pretends the dark, bloody forces of nature don’t afflict us. Therefore we are kept weak of psyche and susceptible to blandishments by “them”.

What I tend to think is that Noto’s bizarre fantasies go back to the dawn of Man, to the cave paintings of prehistoric people of the animal shapes, all different and totemic, that they hunted. The entire mythical relationship of hunter and prey in our world is missing. Noto’s stories bring that to centre-ground again in fascinating Hyborian fables, and she adds a fabric of eroticism that is her trademark – The City of Bells, The Singing Tower (The Tourist, her legendary screenplay).

This gives her Hyboria a curiously classical sense of animated nature, where animals metamorphose into human and vice versa. The talking goat inWizards of the Black Sun (prev) warns Sonja never again to venture into “things that do not exist”. That could be taken to mean a very convincing illusion (the city of acolytes); if it’s a “sun” it could be the pathological light of reason which is opposed to myth.

Classical myths are animalistic as often as not. They just unearthed a fresco of Leda and the Swan in Pompeii..

If animals have iconic form, they only exist in time and space; iconic form is simply perfection which, under the (pathological) light of reason ceases to exist. Perfection – as with the throat (song) – or archaic shtetls – is opposed to reason since it is primordial rhythm. If you look at the contours of your toes, that is what you are seeing: shape that enables free-running over prolonged distances with no wearing. Reason is completely opposed to (classical) rhythm and proportion because it deals in facts.

As I tend to say, if you have a convincing illusion – of the sun or (pathological) reason – the facts will be verifiable. It’s an ego trap because you are in a world of facts that are also fiction, and not of iconic form. The Einsteinian universe is simply a very convincing illusion. It relates to everything which is very accurate and yet at the same time meaningless – Swiss banks, photon-AI, genome. It’s a relativity world of the sun that appeals to the ego; the more the ego goes towards the light of the sun the more convincing it gets, and the more illusory (Swiss banks, photon-AI, genome).

Of course, there is a Greek myth about that – Icarus, son of the cunning artisan Daedalus. I think reason can become pathological when it becomes obsessed with order, which is opposed to (classical) rhythms and proportions. There are two universes. The classical one exists in time and space. The modern one exists in the ego of the acolytes of the supreme-sorcerer.

If I can get more down-to-earth: Trump, for example, clearly has no knowledge of classical reality. He thinks forests have a “floor”, instead of earthen ground with roots that go into the ground, and trees that have a top (leaf canopy) and bottom that keeps them up. Things are symmetrical, and so have a meaning – see Weird 11 and “The Enchantment”. Without symmetries and basic proportions you’re left with meaningless facts (or fictions.)

The history of the Wild West; Indian totems; cantering horses and stagecoaches; dancehalls and theatres.. All these are lost to the fact-merchants who measure everything in dollars – the wormdollar of nothingness – and not in their iconic state. The $, cold-blooded serpent that is attracted to the heat (reason) of the sun.