Hunting to the light of a blood-red moon; the lusts that Man is heir to; the wolfpack lost in the mists.. All things lost to the reign of ego-lust in corporate governance. One is the America of Pilgrim conquests and Puritan settlements (Alternates 7); the other is the hydra-headed Martian interloper.

God’s natural state of rustic simplicity; or the imperial march of storm troopers with twitter-accounts. Molly Kiniry in DT, who knows the Constitution inside out, had this scathing rebuke.

If Americans don’t like this state of affairs, we should have thought of that before we voluntarily cut ourselves off from the means of cooperative governance and public discourse. Now we are in the age of brutal realpolitik, and the power of judges is here to stay.

Govt by tweet; govt by Supreme Court. The land of social, moral and natural governance has been lost to egocentric conceits that are in thrall to the wormdollar. Not just Trump; his pal Kushner is pursuing business interests; probably divvying up the New Jerusalem already.

These worshippers of the wormdollar are the unhuman face of serpents with the features of men (and women with Ivanka, natch Tales of Faith 13) Tales of Faith 11 sort of waxed nostalgic on the 70s Kibbutzim craze, the natural and social simplicity relates to the other world of harvests and frolicking in the gloaming. Not something Sara and Bibi would find attractive since it has a lot in common with 60s hippies, frankly, not to mention Biblical lore.

You’d think Israel would be based on the Bible partly, the matriarch Ruth of the gleaning and all that country fare. Parsley, sage, rosemary and thyme. Bibi has other ideas, despite his similar name. The social almost harmony that can be engendered by simple rural pursuits in communal spirit is not what “they” desire. Round dancing and peasant lore out in the barns. When Trump rounded on the EU the other day for “protecting” farmers, he wasn’t thinking of the worm that turns. Farming is just another industry to him - except it’s not.

Farming is cultivation, which traditionally is mixed, rotating crops and livestock with fallow. The twists and turns of earthworms of humus and loam, air and water, psyche and physique of the earth (HB1.) Man is active on earth; he raises hoe and scythe; activity is natural and moral; Jean-Jacques Rousseau Aspects 3. Tales of Faith 8 has a note on young farmers of New York state bringing back some old ideas; it may take awhile but to reconnect with the spirit of the land is a moral, social act.

I think this puts some perspective on not just Trump and Bibi and cohorts but what they are calling the New Socialists (Tea Party Socialists or DSA). To them, socialism is, “The federal government should guarantee everyone a job.” They are thinking with their heads, not their bodies and the free-living of the range. They think the federal government is reality when it’s just an invention of the mind. They are like the new Adam Smithites (HB5) who think “natural liberty” can be attached to an unnatural mega-state run by Martian acolytes.

Do these people never learn? No, because they are not active types; they are human-headed serpents. The dragon of ego-lust has been let loose on the land, and they know not what it is. Why should they? Did they ever hold a fork and break a clod of raw earth? Such a natural, moral activity would never occur to them. The dragon is killed by the warrior, the man-of-action. The moral force who strides on the land that bore him. Government is killing the moral nature of Man.

Government is a talking shop (as Kiniry says), but it’s not reality. That is the land and social justice in communal settlements. Social justice is attached to the land that bears it, a natural spirit of truth. Paul Kantner, on the album Acoustic Warrior, waxes lyrical on

that “Something’s fucking going on in America” and “It’s like the Green Party used to be in Germany, young people with visions and dreams..don’t be afraid of anything, young people who question why”. The dream, what happened to it? Suspicion seems to be growing that something is rotten at the (Apple) core of capitalism. Is it America, or a parallel America?

What happened to German Greens? I guess they’re still there, in the German state, assimilated by the state- that is what happens because “they” are an unnatural Anti-Life, acolytes of Martian overlords. Man – homo sapiens – on the steppes of Russia or the plains of Africa; we hunt, we kill, we eat, we sing, tell stories, dance. The reality of that is in our unconscious and is completely unreal to “them”. 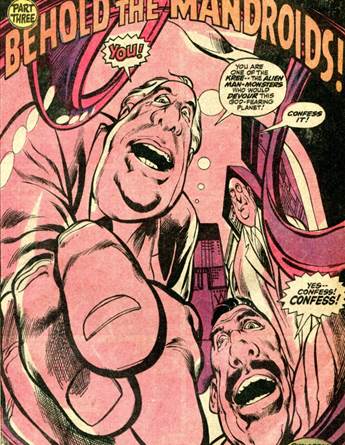 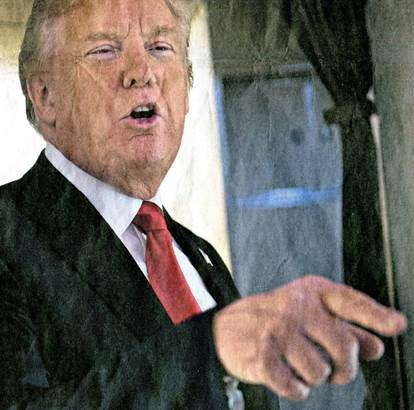 The land of the unreal is natural justice; the land that is not a product of rational thought; the land that has proportion and self-organization. The ancient world that Howard’s Hyborian unconscious darkly evokes. Neither left nor right but lusty and misty; the true soul of Man that lives but to die.

Natural justice is concerned with life and death, not simply with mere existence. What we are told is real only appears real (the false Apollo). Sometimes, when you get the feeling something is wrong, it turns out everything is wrong, the alien in our midst (see Dan Dare Tales of Faith 5) I keep making the point that in Hyboria there were trade routes as pragmatic exchange of goods; similarly, in the Middle Ages there was moneylending as pragmatic facilitation of state ventures such as war, or individual ventures (Pictorial 11)

Those worlds lived in the reality of self-organization and natural liberty. So, what makes Adam Smith free-market capital so different? As I keep saying, it’s the fact that people get hold of Big Beasts like Adam Smith, and make an ideology of them (Darwin, Marx). An ideology is not natural and is nor free; it’s an invention of the mind. As you can see in HB5, in Adam Smith’s day the Royal Exchange was a freegoing thoroughfare for merchants. 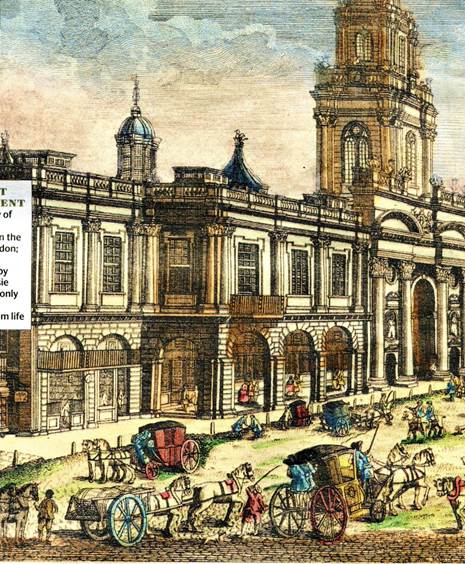 ZOOM into piazzas Potted history..The London “Bourse” was established in the 16th century and named Royal Exchange by Queen Elizabeth in 1750, to facilitate international trade at favourable exchange rates. In those days there were no set rules, there were probably to banks to set interest charges. Merchants traded at will..

The piazzas were supported by marble pillars and above were 100 small shops..Hentzner, a German traveller..mentions the stateliness of the building, the assemblage of different nations, and the quantities of merchandise.. What you call mercantilism, natural liberty, goods for sale as happened throughout the ages. . That is a free market, as known to Adam Smith. Cloths, silks, sold or exchanged by merchants, sent by ships etc. Any rules are set by the exchange.

Think about that, a minute. It’s basically exchange, and the money symbolises the exchange. Money, by itself, is valueless. Only gold or metal has value. Paper and electronics have no value – rien. What’s happened is we have a topsy-turvy world; money has value and the state – through the market – sets rule, sets interest rates etc. All the rules capitalism follows are monetary – and money has no value! It also has no proportion – only goods have that. We live in an unnatural world of disproportionate order – the wormdollar. 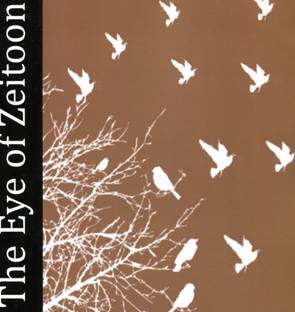 There are always two sides to a process; one is routine, the other is expression. Expressing anything in time is never routine (see CH9 Bruce Lee), it’s grace, poise, dynamic balance. The tapestry that is there for the fight in the romance of Talbot Mundy.

What ideology does is make everything routine and therefore unreal. Then “they” tell us that is reality, acolytes, logical flunkies with no imagination - the likes of Dawkins, the monetary theorists etc. Think about it. We live in a world where people obey monetary rules, and then you wonder why you’re feeling so cy!

Howard’s dreamworld of Hyboria goes back to the ancient feeling of lifecycle as reality; life as destiny, beyond order and beyond human law (Apollo). It is the world of natural spirit, proportionate and therefore illogical. “The illogical borrows from logical”, Corneille (Denizens of the Netherworld 3) Another way of saying it is “the logic of the illogical” (see CH5 on NY tenements).

A good example is Chichen Itza, the Mayan monument to Kukulkan in Mexico. The feathered serpent, a cosmic sun symbol, is visible at equinoxes, as shadow on the nine steps. The phenomenal craftsmanship of ancient Mayan stonemasons; a study in cosmic proportion almost second to nun – I mean none. The universe and the unconscious reconciled in monumental stone.

That is very worthy of a mysterious Hyborian plateau that reflects the unconscious, the illogical in cosmic proportions. You almost wonder if the Mexican women at the ballot box here might be better off with the old lore? 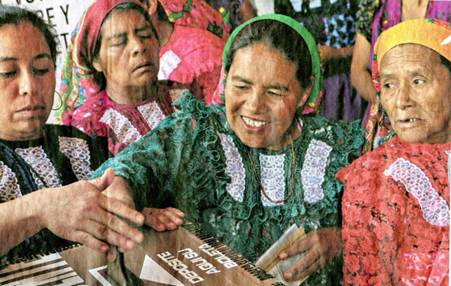 “They” say they need money and jobs, and so they vote for the new guy, Obrador. Then they’re in the same mega-state that sets monetary rules – set by the wormdollar – so that people follow rules that are based on zero value. Hyboria, like the ancient or Elizabethan worlds, is a proportionate one, in-tune with our unconscious spirit, with the great unknown.