“They” tell us this and that, but it will count for nothing if there is no life at the end of the tunnel. Are we souls in limbo or flesh-and-blood? Where is the spectre of death (the great appeal of Thanos)? In a logical future of mere existence, how do we know what is life and what is death? The shadow of sacrifice parades through Greek legend; Iphigenia, after being rescued at the last moment by Artemis, is sent to Tauris as a priestess where ritual sacrifice of foreigners is enacted.

In Euripides’ Iphigenia at Taurid, Orestes and a friend are captured and sent to the priestess. Failing to recognize her brother, events unfold whereby she realizes it must be him. The three enact an escape and are pursued but, at the last moment, Athena appears as a mediator of justice.

Such bloodthirsty themes abound in pulp and romance – see Noto “Red Lace”, Spenser’s The Faerie Queene Hyborian Bridge 1 I made the assumption there that the corporate dragon of ego-lust must be slain by the pure knight, or we become one with the logo. We die but the logo lives on. I don’t really have anything against Ford let alone Harley Davidson, but there should be a counterpoint to the corporate order in rustic freedom (Lil Abner) with logos and brands of their own.

This quote by Noreen Wainwright, who dairy farms on the Peak District, speaks volumes

While anyone in our village would not contest the role the park authorities play in preserving the landscape.. they also need to include vibrant, dynamic communities. It’s no good if we’re simply looking out the window at the view. For that view to do more than just be a pretty postcard, it has to live; and it’s beyond irony if the body charged with preserving the landscape is also strangling the life out of it by failing to respect the views of those who work in it. (DT)

Cows were branded, right? Just down the road from where I live, there was a shootout at a pub called Red Cow, where the landlord died. The family moved out and a few months on it was refurbished. In place of the age-old icon profile painting of a dozy red cow they obviously got an image off the chain of a generic heffer. At a stroke a local logo and place of repute is “wreckovated” 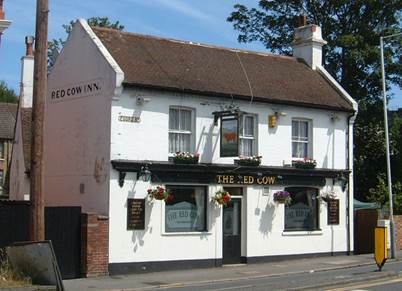 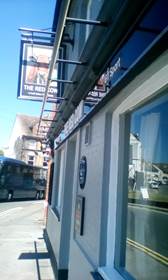 The rustic cycle of life, death is slowly getting denigrated. In France, vegans are starting to terrorise restaurants. There is less awareness of blood-sacrifice, the endless cycle that gives power to the earth, our Mother. Noto, in “Red Lace” (Weird 7) wrote a whole cycle on the power of blood sacrifice. In one scene, you may recall, the centaur dabs Red Sonja’s eyes with blood and she goes blind. This I took as representing the pure knight of inner vision.

Blood and rustic lifecycles, inner vision, the death that awaits everyone. These powerful themes are getting edged-out by corporate everyman. I noticed that Musk started his own private school a few years ago for SpaceX youth pioneers, quote

Dahn described one problem-solving exercise, called "The Lake", which sees students discussing a town with a factory that is polluting the local water and killing wildlife. The factory employs all the people in the town, so voters keep politicians who favour the factory in power. Students are asked to decide: who is most to blame for the pollution, the voters, the politicians or the factory owners?

That is the theme of Ibsen’s Public Enemy which I suspect won’t get a mention as they are not studying language since AI will self-teach that. I’m not trying to be deliberately gloomy, but life without death isn’t worth the paper it’s written on; no melancholy, no meaning. Filipino premier Dutuerte said the other day, “You can’t rationalise God”, who is “stupid.” That says it all about the modern world-view. Anything that is implicated in death – the irrational – is stupid. Living becomes mere existence in a world of level sameness.

Hyboria is everything that statement isn’t. Howard may not have had religion but the great unknown was what intrigued him. Man does not just live and die, he or she has a fate and a destiny and that makes things real. The flatland we are living in is an invention of countless hacks and acolytes. “They” want us to forget the great unknown that the settlements of Man used to reflect, in the fantasy of their architecture, the romance of their citizenry.

In the comics, these two aspects of Hyboria were achieved to perfection by BWS in Conan and Frank Thorne in Red Sonja. No offence to Buscema, his action is impeccable, but Hyborian mystique gives another layer of depth to the stories. Howard pits savagery against civilization while, of course, Conan is often employed as a mercenary, and ends up king of Aquilonia. As I said in Hyborian Bridge 1, the savage psyche is an asset to kingdoms which can become atrophied by rich trade and an easy life.

It is true to say that Hyborian kingdoms are organized, but it is natural self-organization as in the Middle-Ages. There is a darkness to Howard which puts him at odds with the march of Rome; the darkness of the dream and the pure unconscious.

"I believe that many dreams are the result of ancestral memories, handed down through the ages. I have lived in the Southwest all my life yet most of my dreams are laid in cold, giant lands of icy wastes and gloomy skies, and of wild, wind swept fens and wildernesses over which sweep great sea-winds, and which are inhabited by shock headed savages with light fierce eyes. With the exception of that one dream I described to you, I am never, in these dreams of ancient times, a civilized man. Always I am the barbarian, the skin-clad, tousle-haired, light eyed wild man, armed with a rude axe or sword, fighting the elements and wild beasts, or grappling with armored hosts marching with the tread of civilized discipline, from fallow fruitful lands and walled cities. This is reflected in my writings, too, for when I begin a tale of old times, I always find myself instinctively arrayed on the side of the barbarian, against the powers of organized civilization.

What is possible is that the march of Rome, and any global empire, carries within it anti-unconscious; a lie or deception of the spirit (Blows Against the Empire, Kantner’s 1970 album). I’ve been trying to suggest something along the lines that America needs to be self-organized (not necessarily self-governed) and that gives you a proportionate reality.

The same applied to the British Empire with local satraps (Pictorial 7). This picture of the Royal Exchange 1750 is truly proportionate. So is BWS’s splash of Pah Dishah in Conan 23 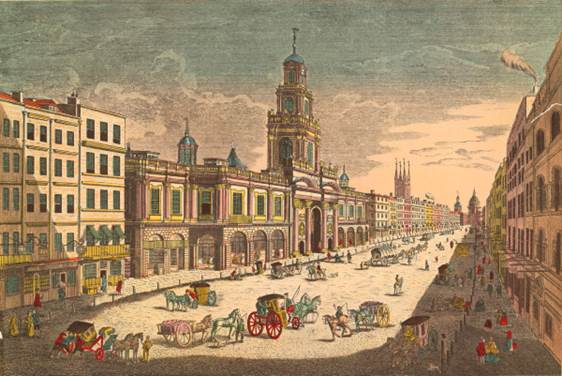 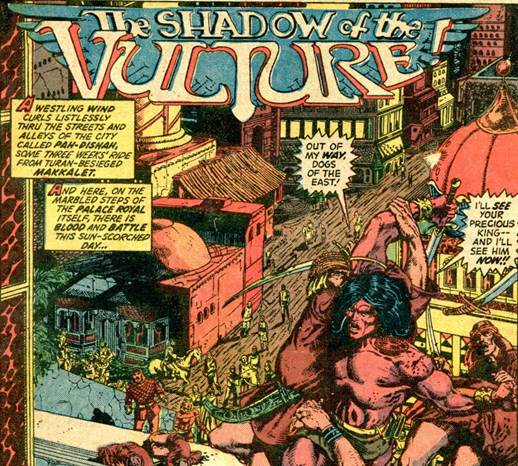 While accepting that Howard was anti-civilization, he was very pro-American. We are told nowadays to believe in economy – the modern lie! Frank Zappa seemed wise to that in Broadway the Hard Way

They hope we will forget

The misery of 'TRICKLE DOWN',

Has simply not worn well,

But neither has my rags,

Up in the Green Hotel (“Hot Plate Heaven”)

In fact, I read a review by Oliver Letwin (Tory MP) of a book an Adam Smith (the invisible hand of the free-market) which says that the freedoms of the market

need to be set by the state and “shaped through social and moral norms” in such a way as to become “a means to generate social value and address social evils.” (review of Adam Smith by Jesse Norman MP, DT Review)

Now, we’re always told Adam Smith is ruthless marketeering, and here it seems he’s a socialist! I think what’s happening is Smith was talking about the state in his day, around 1750. As you can see from the picture, it was self-organized and proportionate. He wasn’t talking about a state which is Anti-Life, anti-unconscious and approaching AI.

If “they” attempt to attach Adam Smith to the modern corporate state, it is another big lie. Life is self-organized or it is nothing, and what we get nowadays is a whole lot of nothing. Social psychosis.

The great strength of the Hyborian kingdoms – particularly visualised in the comics, well, Marvel – is we can see they are natural formations, almost like anthills. Yes, there is a clash of values between civilized discipline and wild, reckless spirit, but it is an honest clash.

I know some of you think there is not enough on Howard’s fantasy in these pieces, but what I’m trying to say is he was an American patriot too. The Southwest, the Old West. What we are sold nowadays is a big lie that “It’s the economy, stupid”.

We are social beings; we experience sinuous pleasure through proportionate balance with reason. That balance is reflected in the elegance or rude vigor of our buildings and quarters. Economy is just the wormdollar, the dragon of ego-lust. “They” tell us clever lies, and the book on Adam Smith is just one more.

The modern state is not balanced or proportionate; it has no interest in pleasure; it’s a logical maze applying reason to everything, including pleasure, for “effect” ($) It’s unreality, the hydra-headed serpent-bodies minions of Thoth Amon sprung to hideous life. Adam Smith was certainly a believer in “natural liberty”, so you can accept that our societies are unnatural, government is killing spirit, inner psyche. “They” think life is rational; it is if you take out the unconscious, the dark vistas of imagination.

If you recall, Clair Noto’s “Red Lace” tells of a mini-cosmos of blood-sacrifice and plants that eat human flesh (Aspects 3 Weird 1). All societies have blood-sacrifice as a theme. If you go back to the Leonardo painting of The Annunciation in HB4, there’s a line of cypresses, symbols of death.

That cycle is lost to us now. We no longer see it at markets. We are no longer aware of the beasts of the fields. In Noto’s “Red Lace”, plants that are fertilized by blood symbolise cyclical nature. Without such symbolism, Modern Man is lost, doomed to a half-life that is mere existence with no sense of destiny or becoming. The cycles of nature are in time; we are outside that magic kingdom.