Pulp writers tend to be good at evoking societies where a lot of different events are happening at the same time in interconnected habitats. Melissa Scott (and Lisa Barnett)’s Point of Hopes has her by now familiar (to me) medievalist river barges, formerly of London, now of an alternate fantasy. They build a world of trading caravanserai of horses and fairs, horsetrading and haggling like the old West meets the Middle Ages. 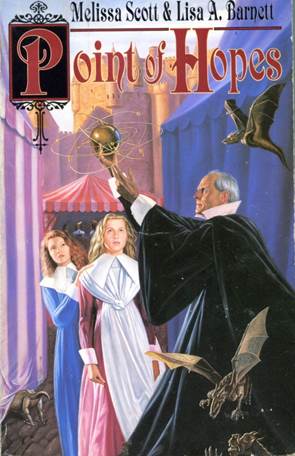 Marshalls or “Pointsmen”, with child messengers or runners under the feudal gaze of turrets and cloisters where astrologers have pre-eminence. The necromancic plot plays out round taverns, fairs, traders’ mansions as the activities of a soldier-of-fortune and a marshal gradually interconnect to save the stolen children of the zodiac.

It’s a story with a lot of superstitions entwined, which fits a fantasy world, and you could say the world up until science became dominant. If you look at Leonardo’s first painting The Annunciation, the perspective is scientific while the figures and gestures are from the medieval world.

I made the point in Hyborian Bridge 1 that this is even more apparent in Durer (Northern Renaissance). In Melancholia there are two totally separate worlds, one mysterious (medieval), the other certain and geometrical (modern). The two could be merged yet, as time goes on, Man becomes ever closer to the vanishing point of certainty (Cosmic Curmudgeon)

The sinuous sense of lots of different things happening  simultaneously that you get in Point of Hopes, is gradually superseded by level sameness (Tales of Faith 11) There is something called non-Euclidean geometry (Tales of Faith Pictorial 8) An egg, the cell cytoplasm or colloid (stiff liquid), the moon, the womb – lots of things happening at the same time. That would be bound to be mysterious – music is often used as a good analogy.

What “they” say is that the information we are fed is “true”, but it’s only true for the vanishing point of level sameness. It’s not true for a medieval city-state where a lot of different things are happening together in tiers. In Leonardo and Durer, the geometry is made very precise to make a scientific point. But the rough, ivy-overgrown walls of a castle make it a lot less visible to the eye, and so more romantic. Basically everything since Leonardo and Durer has become geometrical – such as the structure of an atom – and so approaching level sameness.

“They” will never say that in so many words but they don’t need to as we live in a world of Euclidean geometry, parallel realities. It’s surprising how many people fall for this. They seem to think because there’s a lot of information there must be some truth in it when it has totally nothing to do with the reality of our sensual experience (of non-Euclidean geometry where a lot of things happen together, like music).

Grant Morrison, for instance, in Supergods seems to treat parallel realities as something akin to fact despite the fantastic mumbo-jumboism

Our universe is one of many, grown inside some unimaginable amniotic hypertime. It may even all be hologram, projected onto a flat mega-membrane.. I understood that we were all holographic sections of something invisible to me in its entirety.. These lattices, I knew, were the input and output of pure information. There was time and space, but these were lower dimensions, useful for creating worlds in the same way that comic artists drew living worlds on paper. (pages 113, 273)

I have to say I completely reject that hyperbolic approach to reality, even though it may fit comics universes! The more information we are fed – by the media – the less it is likely to be true; it is all partially true, ie a lie. Doesn’t it ever strike you the modern world is chaotic even though it’s highly organized? Is that why?

I think so, because it’s Euclidean organization, a sort of flatland. If things and people are tiered, they inhabit a single place (space); there is one organization that matters - time. In a single place – a city-state, a castle and surroundings –people are moving around together, interconnecting from the moment of their birth, peasant, lord, fishwife. Many things happen together, in other words, in time.

Point of Hopes is set on an astrological world, which takes that to its logical conclusion where birthcharts are a roaring trade. I think Morrison is describing OUR world quite well – since we no longer inhabit place or time. The ancient world – and of course Hyborian kingdoms – have much less information and “fact”; their reality is in hustle-bustle, cut-and-thrust, market mayhem, bazaars.. (think Old West).

This is the world we have lost to “fact”, the one you find in Weird Tales writers like Talbot Mundy. There are much fewer facts but correspondingly more visceral reality, light-and-shade, atmosphere, romance, troubadours, mysterious women, portents, fated characters.. “Facts”, as I’ve been trying to describe for awhile, relate primarily to level sameness and not to the reality of differences that are tiered – grouped together in a single place (an Old West frontier town, say, as emblematic as a Middle Ages castle).

So, the more information we get, the less reality is there. It’s all very logical: there is aninevitability and the spokespeople we hear are confident and egotistical. In Britain there is “going to be” a third Heathrow terminal which will obliterate with decibels the locality. In the name of Brexit or any other name they will build a flatland of sameness. The facts point to that conclusion and it’s completely logical but also destructive (what they call productive).

America isn’t as bad, it has to be said, because you are less universal in your destruction. Juliet Samuel in DT writes

In New York, grime and underdevelopment are crammed in alongside excess and ambition. “The oculus”, the new transport hub of the World Trade Centre is a study in both. I entered it on the Path train, a transit link from New Jersey that rattles slowly and unimpressively to a stop by a grubby platform.. you emerge into the brand new concourse of the $4 billion oculus..The whole thing is totally impractical.. But damn, it’s impressive.

Yep, that’s America and there’s so much more you could say – the media always give you a partial truth. NY used to be composed of self-organizing neighbourhoods with the “logic of the illogical” (CH5 Pictorial 20) Staten Island, as seen in this picture, was something else in 1984 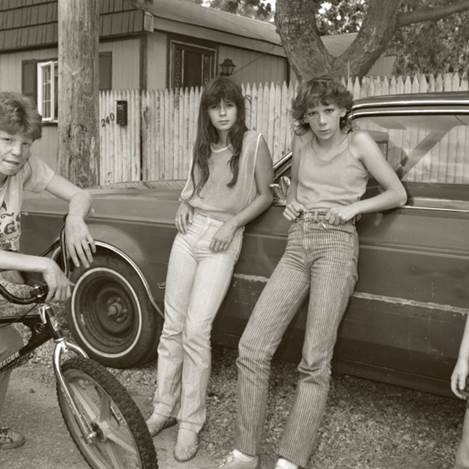 You see that NY in The Spirit – the rundown, the shifty, the glitzy, the land that time forgot and that lives in its own haphazard time. What I’m basically saying is a media of facts is biased towards a factual world, and not a fantastic or archetypal or organic one. Yet that is what NY once was – a fantasy-land of hotstepping and hustling

Laura Ingells Wilder..was the first recipient of the award that bears her name..On Satrurday the ALSC voted to rename the prize. Announcing its decision, the body said that while Wilder’s work continues to be published, her complex legacy was inconsistent with its core values of inclusiveness and respect.

Yeah, but Little House on the Prairie tells the adventures of a family in Indian territory. In that setting, they have to “include them out”, it’s only common sense! The librarians are living in a different world to one which is more archetypal – the livestock, the whispering grass, fireflies at dusk, fiddles. The place is run by matriarchs and patriarchs (pa) and it’s impossible not to be different. Reality. You see quite similar racist attitudes in films like The Beautiful Blonde from Bashful Bend, and the natives a degree of stoicism.

Harlan Ellison on one of his CDs says, “There’ll be no more art-deco skyscrapers”, which I think is a prescient comment. Apart from burning them down (Glasgow School of Art – see prev), art-deco buildings are fantasy that connect Man to nature. In the same way I would say Venice is fantasy and Neapolitan old quarters are fantasy. The sinuous sense of place ties them to our bodies as we amble or glide through them. It’s the opposite to a flatland, and this is also the world of Hyboria and of Weird Tales.

What I want to do next is to point out is the similarity between Hyborian kingdoms and Howard’s historical tales, set mainly in Eastern Europe and the Middle East (Outremer Pictorial 11) His histories aren’t under “the dominion of fact” and quite often characters meet and remeet under the vicissitudes of fortune.