Organic societies are sinuous and atmospheric with an inherently flexible definition of time (“We count not time”, REH poem). You know what I mean just by looking at illustrations to various Weird Tales era writers like Talbot Mundy 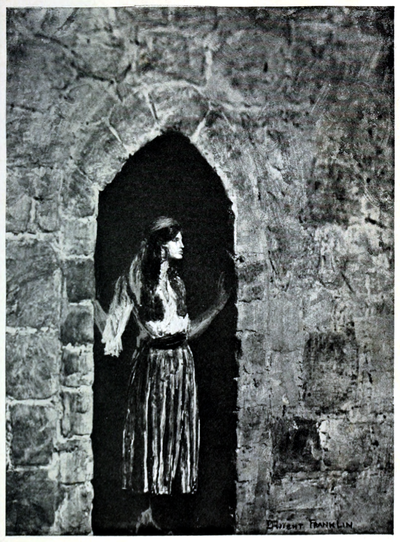 The Eye of Zeitoon

Unlike modern society they don’t search for truth and end up with “a truth”, which is more or less the logic of death. The organic exists in cyclical truth, which is always difficult to define since it consists of opposites. Basically, modern Man thinks he is organized, but it is a meaningless order of psychic weakness. If society is to have meaning, it must exist in time, in nature’s cycles.

It’s the old agrarian society of the old West, of dirt trails and drovers, redwoods and hillbillies. Where there is a felixible sense of time there is also romance, and I think this romance is reflected in the early pulps, from ERB’s A Princess of Mars to Howard’s Hyborian Age. ERB’s hero is a Virginian countryman of ancient Southern vintage who seems to spring out of the mists of time, much like Howard’s.

What is the sense of loss that their romantic countries of aristocratic princesses and savages might conjure up? Isn’t it slightly odd that republican America should dream of lusty princesses allied to conquering barbarians? Aristocrats, like the savage, are figures of power. They carry themselves, they are born to rule. There is something oddly romantic about that, and it is the human figure associated with political power. The sinuous grace; the military bearing (you’ve only to think of the marriage of Meghan and Harry).

It strikes you we are told that society is competition, when in the past it was sensuous human figures in motion. It’s the old adage of peasant, emperor. The human figure has sensual yearnings. The throat, for example, gives sinuous pleasure – Pictorial 1 None of this is actually competition since it is simply what we, as natural figures, are and what we experience through food, sex, being. I’ve actually said this before; an eagle does not struggle or compete, it simply sours with majesty and ferocious talons. All these things that are balance, proportion, symmetry Pictorial 5

That lost world of romance is what the pulps yearn for. It’s simply reality rather than the unreality of endless competition. The wormdollar. Reality in the balance of pleasure with reason (Pictorial 1). The competitive world merely attaches pleasure to the products of reason, such as the cyber-future (of AI). Apollo without Dionysus. Pleasure is organic, flowing, sinuous and is reflected in artefacts (like the recently defunct art-deco Glasgow School of Art – see prev.) This is not what the powers that be want (as Harlan Ellison says on one of his CDs).

A description of Howard’s Hyborian kingdoms makes quite a good critique of modern Man, if I can take some poetic liberties? The villains are always men of arcane science, the wizards who seek to usurp the human psyche with blasphemous inventions. It has to be said wizards are a sensual lot, with incense swirling hazily round their dens, so I guess they have some taste. On the other hand, they use it to try to call down ungodly powers.

Howard’s kingdoms, as I said earlier in Hyborian Bridge 1 have pragmatic custom, laws and trade routes allied to the psychic lustre of conquering barbarians. In Hyborian wars mercenaries are used, much like in ancient Rome (did Howard know that, or I suppose it’s common to early or prehistory?)

Now where are all the mercenaries

Paid for by the king? – Flowers of the Night

Where modern societies weaken the psyche by attaching it to reason (products, cy$), Hyborean kingdoms are a mixture of sensual opulence and sensory overload (the maze in Rogues in the House). Both these are visceral and life strengthening, not to say picturesque. The point is our societies are neither sensual nor sensory because that’s not what “they” want. There might be the odd roof garden, but the vines will never descend down the walls as in days of yore. That would be too much like cohabiting with nature, the days of Diana and her faithful hounds.

Does it never occur to you that our ancestors are not quite as savagely stupid as “they” think? Here’s a quote on Pythagorean Stonehenge

“These days it’s seen as hippy dippy or New Age, but actually it’s a colossal omission to the history of science that we don’t see these monuments for what they are,” added Mr Heath.

“People see the Neolithic builders of Stonehenge as howling barbarians, when they were very learned and it has been forgotten.”

Stonehenge, on Salisbury Plain, was geometrically aligned to summer and winter solstice, spring and autumn equinox, predictive of eclipses, and the stones marked Beltane (harvest) and the time of sacrifice when livestock was gathered. I don’t know much about it, except it is the stuff of romance because it consists of opposites. There is no single truth except what you see in the subtle geometry (like Greek temples are).

Romance is to do with differences, whereas modern Man seeks a universal truth and Boring Companies build parallel realities of level sameness. This is “a truth”, one that does without proportion and symmetry. It’s a very precise reality with none of the tiered subtleties of ancient monuments and scenes. Where you have differences and opposites there is a constant tension in the artefacts, which are an extension of the human figures that frequent them. 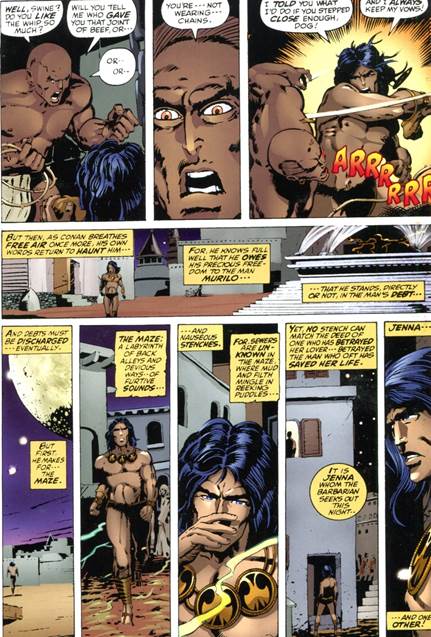 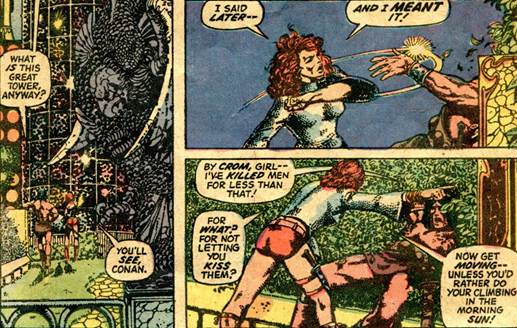 The scene is Conan 11 in some Corinthian city-state has a moon hovering low as Conan strides through a stately plaza with ornate fountain, and into the cesspit known as The Maze. BWS manages to get a sort of dingy Neapolitan air to the high shutters and low steps (despite the best attempts of Dark Horse’s colorist to ruin it).

A romantic aura is a state where two things are struggling for dominance: civilized order and stagnant disorder. Neither succeed, it’s the eternal struggle. What modern Man says is we compete and struggle and become successful. So, in other words, that type of struggle is resolved: we live in resolved space (Tales of Faith 12 CL Moore). That is a parallel reality of level sameness.

In the next scene, from Conan 24, there’s a sculpture of a griffin fighting a serpent. Another eternal struggle where neither wins. In nature animals never win, nothing is ever resolved, they run with the wolfpack till another day dawns. 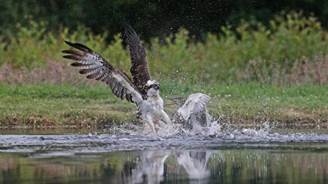 What we’re told in survival of the fittest only applies in resolved space: our space, modern Man.

Artemis is the dark huntress of the gloaming, the goddess who is ever-running through green vales, like Diana and her hounds. There is no resolution to the hunt; it’s a circular quest (Pictorial 18) The struggle between man and woman is eternal and, as you can see here, irresolvable. If it could be resolved all the mystery and romance would vanish. 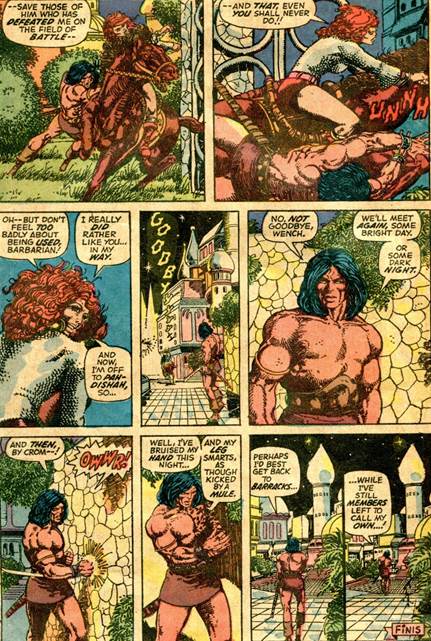 This has always been my favorite comic; it’s to do with the perfect balance of lust and intrigue that the art captures in all its vibrant shades. This is the essence of pulps; the eternal struggle of opposites that is never resolved and gives life figurative meaning.