“Being” (Heidegger) is one of those heavyweight concepts that repel intruders; that’s its strength and its weakness. Then again, if everything was straightforward you’d be as happy as Trump in his geometrical empire of the wormdollar (robot-lust). By the way, even if you’re not a philosophy major, we live in a philosophical world run by “them”.

The Roman Emperor Trajan was known for his earthworks , and especially fabulous spans and cuttings through the Danube. 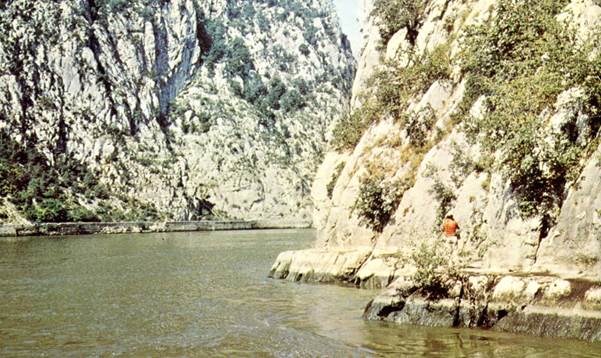 Cutting on right bank of Danube -Rome and the Barbarians, Barry Cunliffe, Bodley 1975

Compared to a Hyborian bridge, Roman bridges are the last word in engineering. It’s safe to say the cuttings were the work of slave-labor, but that doesn’t shatter the fantasticleness of the feta. “Being” is a product of Man that merges with and doesn’t eclipse the splendour of nature, so this feat of engineering is a magnificent example.

What it could represent is the submission of opposed forces. The solid structural order of Roman engineering is opposed by the rugged inclines of the cliff-lined Danube. The fantastic feat is to not submerge nature, or blow it up with dynamite, but to gracefully and manfully persevere against the equally rugged opposition.

It’s the product of a certain “type”; the rugged, adventurous pioneer. They don’t seek to eclipse nature; they worship gods of the water and air. As I’ve been trying to say for awhile, modern Man lives in resolved space where the abject is to have fewer or eventually no differences. “They” want to resolve all differences.

In unresolved space, differences exist in order to be resolved through action – low-level feuding, jousts, duels.. or just workmanship. Trajan’s earthworks are an example of that. The fantastic poise is a type of resolution of this arduous task. So, resolution exists in unresolved space. That’s obvious if you think of an ant-hill, a bird nest, an aerie. The works of animal and Man set against nature have a resolution. 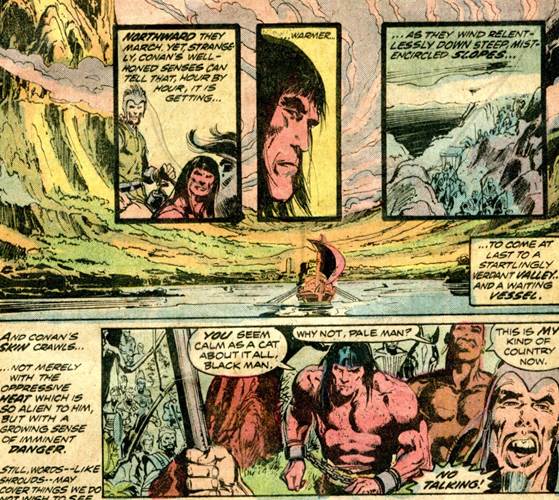 In a world with a strong psyche, of physique attuned to psyche, there is an affinity of differences. The introspective adventurer, the warrior-king, the pure knight and the warrior maiden all have a role to play in carving-out an empire of the rustic mind, the glory of physical prowess attuned to psychic awareness (Weird 15) by “them”

We are always told that differences are there to be resolved by “them”; in the action-based events of Hyboria differences are resolved not by “them” but by action. The reason for that is that every display of difference is a display of psychic awareness, of physique attuned to psyche. If you take the heroic warrior as a non-intellectual type, there is a certain truth to that. He or she harmonizes the mind with the body; so they live in a musical world of counterpoint, action and reaction, ideal physique, balance and timing.

Howard, as is fairly well known, had vaguely Aryan notions of prowess. Robert Weinberg in The Annotated Howard admits they are “irritating”. As others have noted, the vaguely racial, Black or Indian, undertones are normal for Texans ofthat era. Howard was writing about heroes of an unconscious affinity and he couldn’t do other than write about his own type. There is a muscular strength to his prose and, more than that, a poetic aura.

This is the very root of the matter because he is writing about types who know their gods and goddesses,, Ishtar, Mitra, The Grim Grey God. The myth is the psychic world, the world that connects Man to nature. The glory of nature is its irresolvable state, and the fact differences are resolved through conflict, rituals.

It’s a medievalist perspective that people harmonise conflicting elements in the joust, the circus, the bare-backed horserace round Siena. The modern mind cannot conceive that differences can be reconciled, but that is exactly what is musical about communes of yore. The hustle-bustle of meandering alleys is dirty and smelly; as in the Conan film (Milius) competing elements attain  a droll harmony, a mix of disorder and freedom, freedom and law as in the Old West.

The point of the Hyborian bridge is that there is no such thing as order without disorder; order without freedom. It’s a modern myth, and the only thing it gives you is a parallel reality of geometry – the wormdollar of ego-lust. “They” want perfection and they get psychosis. Because the psyche is weak, enfeebled by the modern maze. The best example of order/disorder is a commune, the type of action-based lifestyle that breeds noble pursuits.

Monastic gardening and hebrcraft; courtly falconry; rustic inns, cobblestone alleyways. The grammar of the language of Man. Howard’s poetry displays a constant grasp of this musical grammar that is strong of psyche and physique. Strong because poetry and music utilize competing forces of counterpoint, melody and rhythm. These strong forces of human communes, expressive like a Greek chorus. Age cannot conquer a commune, for there are powerful underground forces, aquifers and springs symbolised by Diana the huntress, the myth of the female aura. A commune is ageless like the moon (on a footnote, Meghan Markle has a communal tribe that gives meaning to her aging process in the Royal dynasty).

There is a type of harmony at work – not perfection as advocated by political types. The communes of Man exist against the competing strengths of nature. Just the other day I saw that Hadrian’s magnicent estate near Tifoli is threatened by a rubbish dump, says prince Barberini “It’s the worst location in the world. You can’t build a dump on top of a Roman necropolis, next to Hadrian’s Villa, and above aquifers that feed a Roman aqueduct,” the prince told the news agency Adnkronos 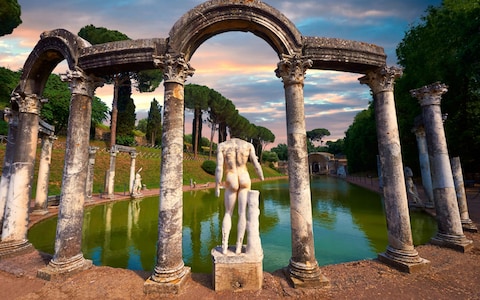 The commune, psyche of Man, statuary and the ideal balance of human physique. Whatever one’s view of Rome, the works speak for themselves, and the glories we see in history are works of exquisite balance against opposing forces. Classic, barbaric, whatever.

People are opposed by type. For example, you may have caught anti-Semitic hints in my pieces? That’s because I’m being true to type. Bridget Bardot is pillorying “hypocritical” actresses for “bagging” producers. Why? She’s being true to type. The modern mind is dishonest because you cannot be true to type and as a result become one with the machine. They machine that “they” build (see CC Beck Cosmic Curmudgeon 2).

Differences can be resolved, but pretending they’re not there is madness and psychic death. The Hyborian bridge takes us back to a sane world of rustic splendour; of nymphs gambolling round sacred grottoes; of waters falling through forests to earth below; of fire and light. It takes one back to the world of content – strength and lust – and not simply platitudes. Content breeds strength, the myth of the woodman, the scout and Kitchimanitou