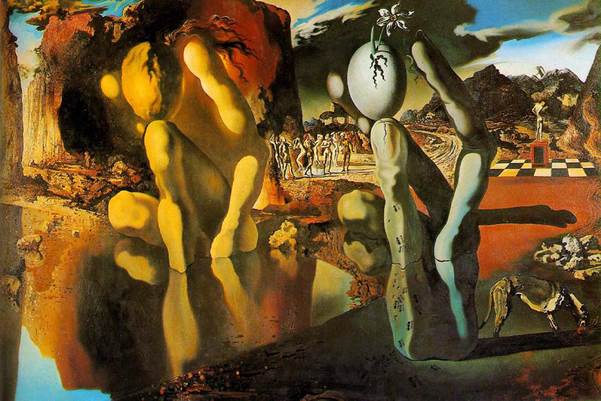 There are two counter-futures here, and it’s worth going back to Dali’s formative painting. The inert hand on the right you could say represents a static and inward turning future. Beyond the kneeling figure of Narcissus are eight naked figures, lithe and agitated, the “heterosexual group” (Dali’s poem).

For the purposes of this website, the eight figures could be taken for a Red Indian tribal group, the mountains and plain and canyon for the landscape now covered by National Parks such as Yellowstone (the yellow pigment of the landscape). So, the painting could be taken as representing two alternate futures, one inward turning and dormant, the other connected to the wider meta-imagery through the chorus of community.

This alternate future has a strength of style I often see in independent films like A Boy and His Dog, with its timber and metal fabrications and desert bleakness. Another is Ghost World, set in what seems like a surrealistic California. The film is based on a comic by Daniel Clowes where he takes pot-shots at his neighbourhood of “losers”. The odd thing is I found something very likable about it (the 50s diner – awesome) so I’m wondering if it’s a neighbourhood in the process of modernisation that hasn’t got there yet? Once a place has been completely modernised, you are getting towards the narcissistic state of the inert hand on the right of Dali’s painting. A place like Topeka in Harlan Ellison’s story, where they hold committee meetings and drink coffee all the time!

Real style has a type of strength to it that reflects the organism it is inside. The larger universe, if you view it as an organism. You can just forget it and live a routine life in a political, factual world, but you will be given fake style.

The organic landscape of a National Park has what you could call the opposite sense to an inert narcissism. It feeds the mind with meta-content, gives the psychology somewhere to go, which should be able to capitalise on a great strength of style. The organic, going outside the self, to the chorus of the community.

Here’s quite a good musical reflection of that, an extended guitar piece from Happy Trails, also with choral harmony that whoops up the atmosphere (riding down epic canyons).

You’ve got to guess what this music is about but, going by the album cover, it’s a Western. Those yodels are almost cosmic, and the drones at the end remind me of Ligeti’s droning score to 2001, the stargate sequence. At the end of that is a rebirth (the starchild).

A reasonable guess is that the song is to do with the violence of the west, and possibly at the end a pointer to rebirth (the film and album are both ’68). With that history of violence in mind, the alternate future aims to avoid a repeat of violence, but that doesn’t mean in any way timid. Essentially, it’s an invasion of territory, the large tracts of land covered by National Parks and governed by the federal state.

It’s revivalism going back to pioneer roots, so that means building a cabin in the woods, clearing ground with hoes and horses, constructing a corral. All this work implies you the people own the land and not the federal state. While constitutionally that’s true, it requires the establishment of an alternate administration that ensures there is no breakdown of law-and-order and anarchy.

With the alternate administration there is no formal government as that defeats the object of the exercise! The land is yours to work because it belongs to no one; the state is just holding it, conserving for preservation.

Now, “preservation” has the same ring to it as “reservation”; the two areas that are not really operating as eco-cultures as in days of yore. Basically, what I mean is there are buffalo in Yellowstone but no Indians. So, one of the first acts of the administration would be to allow in Indian hunters (who are already camped on the outskirts).

The best way to do this is probably with a formal constitution; any villages and outposts established follow the constitution. There’s no need for a government, but clearly a great need for law-and-order. Any revival is also a type of reinvention, so what I propose is partly historical and partly taken from fantasy.

In American Flagg!, Chaykin has a futuristic society of malls – or Plexmalls – under the armed jurisdiction of Plexus Rangers. The Plex in his future is a quasi-anarchic institution. It’s all very violent but, hey, it’s only a comic!

Taking his idea of Plexus Rangers ©, they would be established to range on horseback and maintain order. Another idea from history is the Apache Scouts who were employed by the US army. In the extract on Chaykin’s American Flagg! (Outtake 2), the reviewer quoted was querying if the “old west solidarity” really existed. This is the chorus of the community, which I think “Calvary” represents quite well. I’m no expert, it’s just a given in any situation of going back to pioneer roots. Dance, fiddle-playing, music-halls.. take it from there (watch old films).

The pioneer spirit is communal, and the community has an eco-culture. There is no need for a government based on facts because their facts are for the purpose of imposing government. The new territories are composed of people who want to live off the land. There will be trading-posts as in the old days. There may be small villages but all on a limited scale. Trade I guess will be the only external economy, but that just fits into the larger one.

We’re told nowadays, “It’s the economy, stupid”, but actually there are two alternate futures here. One is to “live”; the other is to be inert, to be forever gazing at ourselves. I’m not going into all that yet; mainly, I want to outline a convincing alternative. Some of it has fantasy elements, or call them dreams.

Rather than just an economy, you want to ask, “What economy? An active one that connects communities to each other and to the eco-culture they’re inside of, as in days of yore based on horses. You could envisage underground malls with stabling, coordinating the new territories. 1961 filmThe Misfits (with Gable and Monroe) is about the last cowboy Mustangers (catchers of wild horses), and you could envisage herds roaming free being corralled as needed.

In Chaykin’s comic, the Plex is based on Mars, and it doesn’t seem to me one has to abandon advance by taking-up pioneering ways. Let’s fly to Mars if it’s possible, but let’s not become robots in the process.

So, how does one avoid conflict with the federal authorities? An eco-culture is composed of horses, buffalo, cattle, corrals, mountains, forests, so this has to be expressed philosophically. Those of a pioneering disposition then band together and invade the National Park territories. The purely political argument has to be countered with a philosophy of eco-culture. The organic, going outside the self, to the chorus of a community and the wider landscape, the meta-imagery and meta-culture.

The argument of the cowboy isn’t very abstruse, and there are films worth citing. In The Misfits (1961), Monroe’s character says to Gable’s cowboy, “There’s nothing out there”, and he says, “Everything’s out there.” “What do you do?” she asks. “Live, smell the breeze, brew a coffee.” He also says, when you don’t know what to do, sometimes the best thing is just to stay still. Cowboys are “good for nothings” but they’re “good friends.”

All that runs counter to a modern society where you have to be seen to be doing something, and definitely not just living in the quiet of the countryside (“The sweetest sound there is”.) The rough timber and bare stone cabin (“Too rough for you Rosalyn?”) reminded me of the harsh style of the desert encampment in A Boy and His Dog (1975). There are some similarities between that film and The Beautiful Blonde from Bashful Bend (Preston Sturges, 1951). The music-hall scene with the backing troupe of warblers is mirrored on the grass of the underground town Topeka which Vic invades. Topeka is mimicking the old west but without the zest and communal hilarity. In the Sturges film there are two yokel brothers who yodel; these seem also to be mirrored in Topeka (they’re killed by Michael the robot).

In The Misfits, when they first visit the cabin, there is a long scene of smoochy dancing with Guido (the pilot) and the other two, plus Rosalyn’s aunt. So, if you want a Wild West atmosphere, even if it’s fake, there’s going to be communal dancing; but to make it authentic the larger establishments, music-halls and rodeos, are a must.

These establishments will reflect the eco-culture in their dress and activities (and smells). Think John Ford Westerns. What you could call the musical zest of the larger scale establishments empowers the community and connects it to the wider meta-imagery through the chorus of community – zest, dance, fiddle-playing, moonlight dancing in shacks (reminds me of the opening scene of Ghost World.)

In a strange sense, the noise and confusion create a type of stillness in the wider sense.

There are two completely opposite futures here. One is the great outdoors; the other is the great indoors. One is inward turning and isolated; the other is communal and rambunctious. One feeds you images but cannot give you atmosphere, cannot feed your mind.