The Black Sun that has lost the active principle of movement in the (physical) sky; one that shines from places the sun don't normally shine.

That is, the invisible, perspective world that is so attractive to the ego; the speed of calculation that leads to the vanishing point of technique (or algorithm).

The question is, are numerical compulsions in a perspective system all signifiers of zero? That question has been aired before - C3, P43.

In a nutshell, it's like asking, is the material in CERN the Black Sun that is simply speed of calculation and numerical compulsion? Meaning that the Black Sun is not a physical reality that moves with the physical sky, with the wind, with the moon, with the sea.

I think that's right if we are living in the active world of fertile forests, the hunt, lifecycles and the symmetries and proportions that GI with the active land of the figure, rather than the inert universe of the head.

The worship of the head removes the body from its communal activities in the field, from the communal affinity of differences (P115). As noted in C3, the state of life which physically evolves - ie is strong - has a decadence that has the strength of revival.

It could be a castle,  with the dirt and grime that strengthens the immuno (germs); where cleanliness gives health and not simply sterile weakness (see Fuller's Earth HB60).

Decadence is the natural decline that only Man's folly can halt. Another example us Detroit (prev), which had a fierce decline in the 80s, spiraling violence and sordid wrecks.

The decline, though, didn't destroy the stubborn communal spirit of yore, and revival was imminent with the eventual securing of investment. The illos in Drama3 are oddly redolent of old-time castles and overgrown ivy.

Physical decadence and psychic vibrancy in a communal setting; it's the almost animal way of living where physical action is always what counts.

This goes back to the quotes by Lawrence van der Post and Buffy Saint-Marie on dried manure that is used for fuel on the plains of Africa and on the Indian prairies. Something that is left develops a use through the process of decay.

The use is not only to do with health and physical strength, dirt and cleanliness, but the communal vibrancy and the facility for story-telling by twilight campfires.

This entire universe of strength - psyche, physical, communal - is removed from consideration by the inert universe of the head.

All this implies is that the fertile reality of sun and moon and sky is denied to a sterile universe of numbers. The Black Sun of perspective illusion.

The fact that decadence exists in the physical universe is given somewhat sardonic treatment in Byron's Don Juan, where

Canto IV
There, on the green and village-cotted hill is
(Flanked by the Hellespont, and NY the sea)
Entomb'd the bravest of the brave, Achilles;
They say so - (Bryant says the contrary):
And further downward, tall and towering still, is
The tumulus- of whom? Heaven knows; 't may be
Patroclus, Ajax, or Protesilaus;
All heroes, who if living still would slay us. (76)

High barrows, without marble, or a name,
A vast, untill'd, and mountains skirted plain,
And Ida in the distance, still the same,
And old Scamander (if 'tis he), remain;
The situation seems still form'd for fame -
A hundred thousand men might fight again,
With ease; but where I sought for Ilion's walls,
The quiet sheep feeds, and the tortoise crawls; (77)

(Troy, natch.) These cyclical situations of decadence and fertility are outside the perspective illusion that " they" call reality, that is a type of inert nothingness.

A Greek temple is never entirely straight; it's lines are subtle and highly proportionate. It is this sense of proportion that gives physical reality its fertile, living presence ( same for an art-deco skyscraper y Sullivan, natch.)

Proportion and symmetry. In a sterile system even the meat we eat can lose its symmetries, through the profanity of GM hygiene (HB56).

reality is nothing without proportion and symmetry, since that is the lithe hunter, animal and active, fertile and vibrant. Components of physical reality on planet Earth (as opposed to the dead red Mars).

This is the land of the imagination (quote by Kantner), of the chase through forests measureless to Man; of the thrown javelin; of blood, carrion and the crafty crow.

From figurative art places Man in a relationship with the landscape. Without these symmetries - see "The Enchantment", W11 - of the fertile activities of maiden and warrior, under the blue sky above, the universe collapses.

This is the rule of the Black Sun of physical boredom (inertia) and numerical compulsion in a perspective illusion of straight line calculation so attractive to the ego. 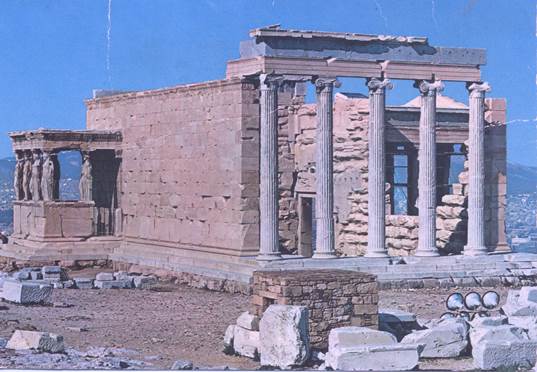 Decline of the Erechtheion (to Athena & Friends)