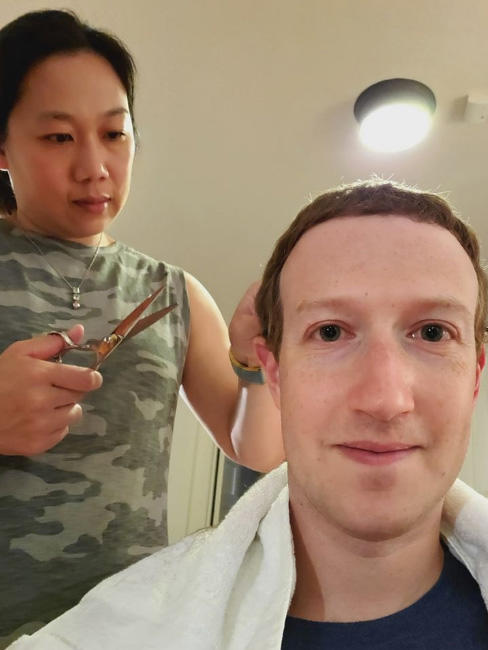 Here's a pictorial example of the vanishing point of speed (of calculation. Zuckerberg made the comment that 'lockdown is two haircuts long' but, from the picture it doesn't look as though he needs more than half a follicle removed. It's the picture of a non-event where there's almost no hair to be cut; the main thing noticeable is the backlighting.

'They're selling teacups instead of the tea. And of course it's in evidence today. They have no-caffeine coffee, and no-tar cigarettes, and no-cal drinks, and no-salt this, and mo-sugar this, and you're buying a container with an inert filler in it.'

Relating this to the modern scene, the faster the calculation - meaning algorithms - the less physically or socially something is happening, and the more one is seeing performing heads - which will themselves become expressive algorithms

Zuckerberg, with his mild smile, even looks like one - perhaps he already is? It's true there are some fierce downsides to physical and social happenings - such as decadence and violence. I happened to look up Detroit's Brewster housing project from mid 30s to mid 50s, where residents included Diana Ross and others.

The marker has this quote.. A community filled with families that respect and care in a beautiful, clean and secure neighborhood.

The impression I got was that the project gradually ran out of time as folks moved out. When full of families, a family-unit is by definition composed of differences; meaning men, women, children or old folks. Differences spark psychic affinities, and there is a social grace to that

Once the family-unit moves out, the affinities are replaced by sameness, and the addictive, junky atmosphere taken hold. Diana Ross, in an interview on her 76 album, makes the comment on TV that,

'Anything that holds your attention dominates you and really controls you.'

..in what could be taken as a loaded reference to a 'junky' dependency.

Going back to the Zuckerberg pictures, the odd thing nowadays is that the more things tend towards zero happening, the more dependent on it people seem to be.

This is almost like the state of physical boredom that automatically becomes associated with numbers, or algorithms. If it's an expressive algorithm, it's something where the speed of calculation counts - so we're back with speed and the vanishing point where zero happens.

An expressive algorithm is just a good copy; the face contains node-maps that the machine recognises in its perspective system (of straight lines or electromagnetism).

As you are probably aware, I apply this to everything from SpaceX rockets down. The speed of calculation (algorithm) enables one to enter a perspective system that is outside of physical reality. Physical reality describes a state of balance and proportion - like a bird in flight - while perspective reality is solely speed.

In other words, inside a perspective system there is no balance and proportion, and therefore no limber movement of athletic bodies. Athletic bodies runn for game, throw javelins and engage in sex. They live in and are part of a fertile area.

The planets are plainly sterile and only have psychic resources (that appear to us on Earth in the physical sky.) This is just a way if saying that the physical universe is not perspective - light or sun. It is balance and proportion, like the body.

One way to recognize how sterile and lifeless the system of speed (calculation) is, is to actually live in a fertile system. This is like the opposite to Zuckerberg's hairless state, and much more akin to the '73 musical 'Hair' (prev). Licentiousness and semi-nudity with a lot of hair is the order of the day.

A fertile area is obviously not just sexual, since fertility means plants nourishing animals, who themselves become prey. Fertility is not sterile, which means there is plenty if dirt, and the strength of dirt (germs, immunology).

In Canto II, Juan and Haidee engage in trysts in grotty caves, the descriptions are very elemental, while Canto III develops on the food and wine front.

Noe she prolong'd her visits and talk
(For they must talk), and he had learnt to say
So much as to propose to take a walk,-
For little had he wander'd since the day
On which, like a young flower snapp'd from the stalk,
Drooping and dewy on the beach he lay,-
And thus they walk'd out in the afternoon,
And saw the sun set opposite the moon. (176)

They looked to the sky, whose floating glow
Spread like a rosy ocean, vast and bright;
They gazed upon the glittering sea below,
Whence the broad moon rose circling into sight;
They heard the waves splash, and the wind so low,
And saw each other's dark eyes darting light
Into each other - and, beholding this,
Their lips drew near, and clung into a kiss; (185)

In Canto IV, it's clear the romantic pair exist in the physical reality of the hunt, the chase. They are compared to birds that have no need of calculation.

..For Haidee's knowledge was by no means great,
And Juan was a boy of saintly breeding;
So that there was no reason for their loves
More than for those of nightingalrs or doves. (19)

The romantic hero has to be blooded and, swift as he is with a sabre, Juan is felled by the corsair's crew.

The second had his cheek laid open; but
The third, a wary, cool old sworder, took
The blows upon his cutlass, and then put
His own well in; so well, ere you could look,
His man was floor's, and helpless at his foot,
With the blood running like a little brook
From two smart sabre gashes, deep and red-
One on the arm, the other on the head. (49)

In this physical world if flesh and blood, the psyche is strong - tragedy strikes and the spirit I'd struck down.

The simplicity of this fertile (romantic) world is in stark contrast to the world of calculation (speed). The physical world is much closer to the animal spirit that is one with the moon and stars above. The symmetry, symbolism, meaning and power are contained in the poem.

The figurative world of action action has to be seen in contradistinction to one where these symmetries and proportions have been eroded by the Black Sun of number and calculation.

The Black Sun that exists as s perspective illusion of sterility. A compulsion of number.