Soft hour! which wakes the wish and melts the heart
Of those who sail the seas, on the first day
When they from their sweet friends are torn apart;
Or fills with love the pilgrim on his way
As the far bell of vesper makes him start,
Seeming to weep the dying day's decay:
Is this a fancy which our reason scorns?
Ah! surely nothing dies but something mourns! (3/108)

From finality comes destiny, memory and revival, the day winks out with twilight and the glory of the full moon arcs across the sky.

With the landscape comes figures, and the meaning of action in the field. Fertility and its association with places of power (hence ancient symbols like Stonehenge, Chichen Itza, the feathered serpent and rain god).

I know this can seem like Abstraction Incorporated, so to give a positive example, and a negative. I've always been a fan of Kibbutzim (P119) as traditional nests of agrarian activity. "Nests" because there are no bees in the Negev, only buzzards pecking at dying camels (that's an in-joke to Chroniques due Sable).

The bodily freedom of barn-dancing and frolicking in fields with gay abandon. Heck, I know it's not much like that, but with fertility comes the sexual aspect of movement in the field. It may not be Ruth the Maobite (Matriarch of the house of David, ancestral to Christ), but figures in an agrarian landscape have the body freedom that goes with active physical labour by the hinterlands of Galilee.

What's the point of living in the land of Abraham if you're just gonna do a 9 to 5 routine in downtown Tel Aviv?

Whether it's Netanyahu or Trump, these types have no concept of land and soil. To them it's real estate; there is no god-force, no spirit of the past. No ancestry, matriarchy, protective plumage, oasis.

The nature that these types have no conception of is the nature that nurtures and protects; the young encircled by the enveloping wing.

The nurturing aspect of nature is the feminine, instinctive and night-born. It is the aspect associated with the harmony of physique - grown in the womb (moon). 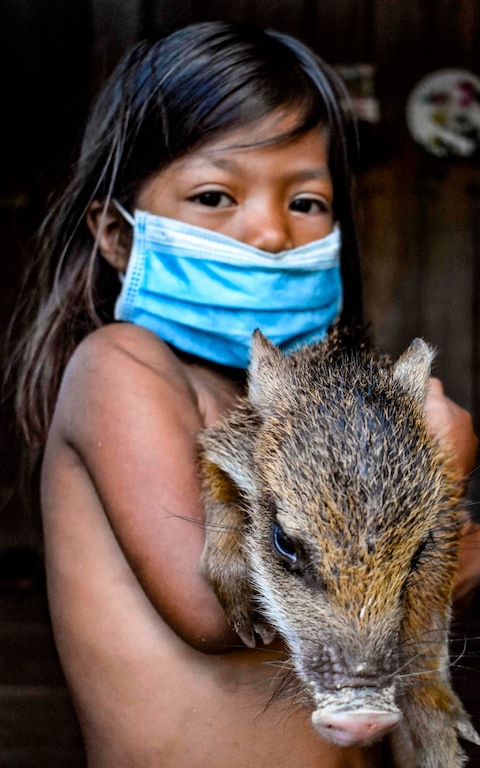 Piglets and kidlets of the Amazon (DT)

As noted previously, Darwinism has "switched" from the universe as organism to the universe as straight-line perspective (sun), which is attractive to the ego, with its sterile numerical calculations (see Grace Slick quote HB62/2).

This is the world of physical boredom (head) and the Black Sun of illusion (see prev Wizards of the Black Sun). The sterile kingdom ruled by a sterile sun - not the true sun that races across the sky - attractive to the ego of acolytes of a numerically certain order.

This is merely the vanishing point of technique, a perspective illusion, and not the fertile reality of day a d night, psychic balance of the universe that powers our spirit. The finality that revives spirits.

To take a concretely example, the perspective illusion is built over the organic landscape of ancestry.

"The Battir hill landscape ..has largely employed the same agricultural methods since Biblical times..
The Roman-era terraces, springs and olive groves would be bulldozed."

The industrialists have been heartened by Netanyahu's expansionist plans and,

"The industrial zone is an expression of the confidence they have - that they could even get away with destroying a world heritage site."

The ego is forever attracted to the vanishing point of technique because it is so certain; illusion becomes reality. As certain as the algorithmic rockets of Musk.

What I mean is it's a sterile illusion of certainty (head, ego, sun). The agrarian body is gay and free, with the joy of bounding hounds (Diana).

Naty Barak of Hatzerim Kibbutz made the comment that the wells of Bathsheba that supply them are the same that Abraham built. The landscape is represented by places of power; wells, springs, terraced hills, the fertile soil.

The wandering line is always associated with strength and fertile terrain. Naty Barak was talking about the drip-irrigation pioneered by Hatzerim from 1965. Somewhat similar methods were employed by Andean farmers on tightly terraced crops (without plastic pipes, natch.) Places of power are elemental places of water, earth, wind, sun (feathered serpent).

What has changed in Hatzerim in the interim is that food-crops are no longer grown, only the jojoba for oil. That puts Barak's message about "sustainability" on a slightly moot footing if there is nothing to be gained from the soil for future generations, only monetary profit.

Nevertheless, agricultural Kibbutzim are a bedrock that is strong and fertile, not easy prey to the sterile illusion. Figures in a landscape and places of power; the nighttime that halts the vanishing point of technique with the finality of decadence and renewal. The hunt through the forest of the night; the owl on wing; young in nest; barn-dancing in the twilight.

Remembrance, destiny, the land and sea, stars above.. not ego, reality, the dream of the universe.