As I’ve been saying for awhile, the end-product of geometry is AI or the human-symbiot (of CL Moore’s Heir Apparent). Gucci designer Alessandro Michele (having been reading A Cyborg Manifesto) opines, “It’s a way to augment an idea of who or what we want to be.. we’re post-human”,. Well, I’m no fan of Gucci! (see Gaultier prev.) 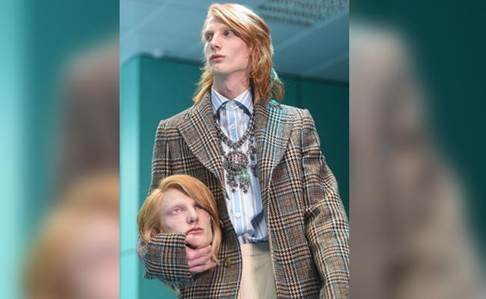 It’s a psychology of geometry interwoven with human, an unnatural order. Has anyone wondered why assault rifles aren’t banned in the US?  Could it be an attraction to the order that is apparent in the geometry of a heavy weapon? Theysearen’t colt 45s – there is no debate because Man is already cy in behaviour (the Italians always get there first, trust me).

“They” always say “guns and God” which is a sort of lazy phrase. You could say both could be under the sign of the $ and you’re on the cybernetic highway. But a hand-gun is not an assault weapon, and the cross is obviously a symbol of organic life (on a wooden cross). The crescent is likewise an organic symbol of moon and star. The ancient symbols – like the raven – speak of the psychic power of Man and nature and cosmos.

The ravens are circling the land of geometry, the land of weakness, under the sign of the wormdollar. The overwhelming expansion of Amazon is just a sign that under the $ all things are geometrical; the riches of a parallel world. The death of the mysterious counter-rhythms that give organic life a musical meaning.

I know many of you will have baulked at any suggestion of Nazarene sympathies in Howard – even though his historical tales are from the era of Faith. Maybe he just liked the countercurrents that rushed across the Byzantine chessboard under opposing signs? Blind faith is organic and musical. I get the same sense from songs like

A CHILD IS COMING

The Dioysian urge versus the deathforce of Apollonian order; a cyer-order of geometry under the sign of the dollar. Apollo has a sister called Artemis – see BWS prev – the dark feminine mystique wholly absent in our future of eternal sunshine. As a slight detour, I came across The Kindly Ones (1987) by Melissa Scott, of Astounding and JW Campbell award, which has a very feminine tone, reminiscent of Starstruck’s female officers/engineers in spanking outfits and cranky spacecraft of the line – also has an offstage character called Belit. As Starstruck the play dates from about 1980 possibly the old-school Americana has some connection, cap’n?

The colourful planetary descriptions of agrarian cultures trading and feuding with elaborate rituals and Matriarchal clans have an organic musicality; computers are low in the pecking order. Coincidentally, one of the Family heirs has the same name as Jefferson Airplane’s first lead, Signe

Another example is Dark Tomorrow from Savage Tales 2; again you get duelling in a ritualised society. The end line has always resonated with me 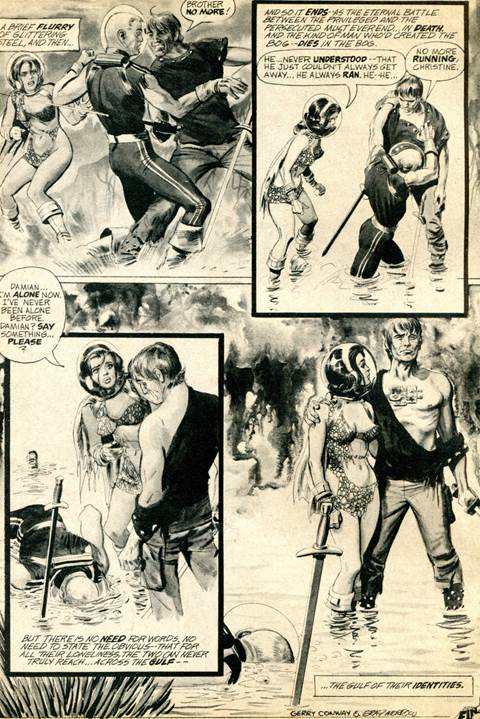 The gulf of their identities. You can almost imagine a future story that tries to resolve their differences through adventure. That story would have the mystique of feudal, familial ritual. In the future “they” have in mind, all differences are already resolved in the parallel reality of cy-dollar worship.

That future is the death of the awareness of death, the death of life as a legendary event – see Tales of Faith 1 – a future of eternal advertising slogans, the ever-smiling Bezos-face, cy-maestro extraordinaire. That future is remisniscent both of Alphaville (1963)– the cybernetic city of Alpha-60 exists in an eternal present – and of A Boy and his Dog (from 60s Harlan Ellison story)– the underground town of Topeka exists in an eternal past of cheerful slogans. In both films, faith wins through against the dehumanising; the love of a woman for a (legendary) man, the love of a man for his (legendary) dog.. 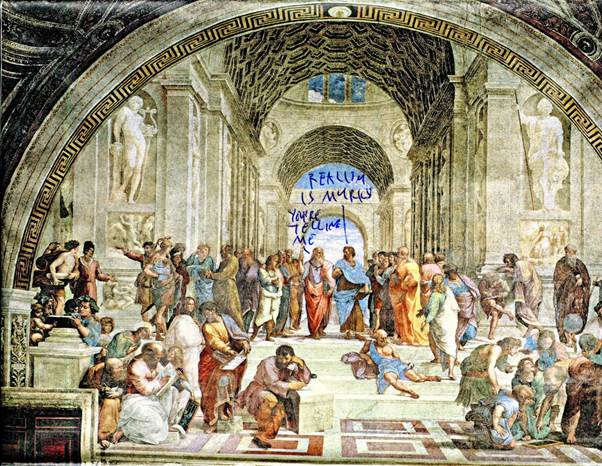 On the subject of legend, another story in Savage Tales 2, The Crusader is the tale of a Saracan who honours an unknown knight – somewhat similar to Chroniques du Sable (Tales of faith 1). Where people are very different, as in the Middel-Ages, they live in a psychic reality. To that extent they are similar and their affinities are profound – faith, duty, allegiance, honour, nobility.

Is it possible we live in a world where honour and legend and nobility have no meaning? What then is the point of life? What it could mean is we have lost faith or, rather, we have faith in Anti-Life (see Pictorial 9 Forever People #3). That Anti-Life or anti-faith is the dollar - the sign of a geometrical order.

There are two sides to everything and, if you think about it, the planets are astrological symbols and also astronomical objects – one doesn’t cancel out the other. I’ve been keeping track of Charles Saatchi’s column in DT and the latest is Raphael’s fresco School of Athens.

As he says, there was no “school” and this is an imaginary hall, with Plato and Aristotle conversing centre-stage (pardon my pen!) Saatchi gives his usual rundown, but I was struck by the line

Another venerated thinker, Socrates, is seen in a brown robe looking towards the left.

That seems to imply he either doesn’t know or doesn’t care Socrates was Plato’s teacher, and was told by the state of Athens to drink hemlock; Plato’s The Republic records many of his socialist teachings, which the city-state must have viewed as treasonous.

It’s worth noting that the picture is Raphael’s view of ancient philosophers, so you almost have two pinnacles of achievement superimposed – high Renaissance and classic (Raphael used contemporary models so that, say, Plato has the head of Leonardo). Which may explain its detached tone.

In reality there probably would be furious debates, and the odd rapier. The reality is that reality is a balance, and Raphael’s fresco has that idea centre-stage. Plato and Aristotle are arguing till the cows come home – a dialectic of the ideal and the real - and neither can convince the other!

Basically, that is the classical moment because the old gods still exist even as rarefied debates proceed in noble halls and serene courts of country villas and the odd farmyard with straw-chewing shepherd.

If the myths exist, belief still exists and this takes us into irrational urges and the cloven-hooved bucolic god Dionysus, There are two sides to everything, and Raphael depicts one, which is rational debate (Apollo). The entirety of the others side is outside those cloistered surrounds, and it really is a type of peasant gaiety that we have all but lost.

Why have we lost so much? Well, taking the dollar as the sign of reason (Apollo), almost everything is under that sign. Not everything, actually, and it might help to have a brief excursion into music where rustic roots and ideals stemming from the 60s and the blues persist. Franz Ferdinand, I couldn’t help noticing, have a new line-up with Dino Bardot on keyboard/guitar. That just has to be a pseudonym referencing Dino Valenti of Quicksilver, since both bands have double leads (the “Bardot” being their arty French producer). Quicksilver are on the set-list (CH5), their cowboy-folk-rock being distinctly uncommercial but exhilarating (Dave Freiberg, by the way, had a second life with Jefferson Starship Happy Trails).

It sometimes comes down to being two things at once; say, primitive and sublime. That seems to be why they sometimes call it art-rock since in a commercial context it just isn’t possible. The art-rock or folk-rock is a commemorating a legacy, and sometimes the legacy is dark, as with

The West, the Indians, cowboys and settlers who have lived according to a code of honour, duty and allegiances, whose faiths carried them through upheavals. I think music has this ability; the ballads of olden days were not commercial, they commemorated legends, told of courtly love (virelai), of psychic vistas (hymns) Alternates 4

If the $ is Anti-Life, it’s not the dollar of old, the Wild West Reward sign, it’s a Martian dollar, the symbol of reason applied to pleasure (warehouse goods, Amazon, drones). That is pure geometry; and geometry is AI. The two are equivalent and under one sign. Geometry is the real problem (as in CL Moore’s Heir Apparent). The Italian Renaissance is full of human figures, that’s the difference. If you look at The School of Athens, Plato and Aristotle can’t argue themselves out of this human condition! However ideal or however real, the two are always seen in the human figure.

The hubris of modern Man is such that the glory and grandeur of Greece and Rome are just a stage in their advancement of the human species; a classic error born of Apollo and fallacious reason. Life is a dialectic; there is a sun and a moon, Artemis and Apollo. Those who don’t see that will get their reward, and it is pure order, the equivalent of death (see Weird 8 Korvac). No animation, no gaiety, no primeval urge, no feminine mystique.. Those things are there just outside the gates of The School of Athens in the cloven-hooved form of Dionysus (see CH3 Euripides’ The Bacchae).