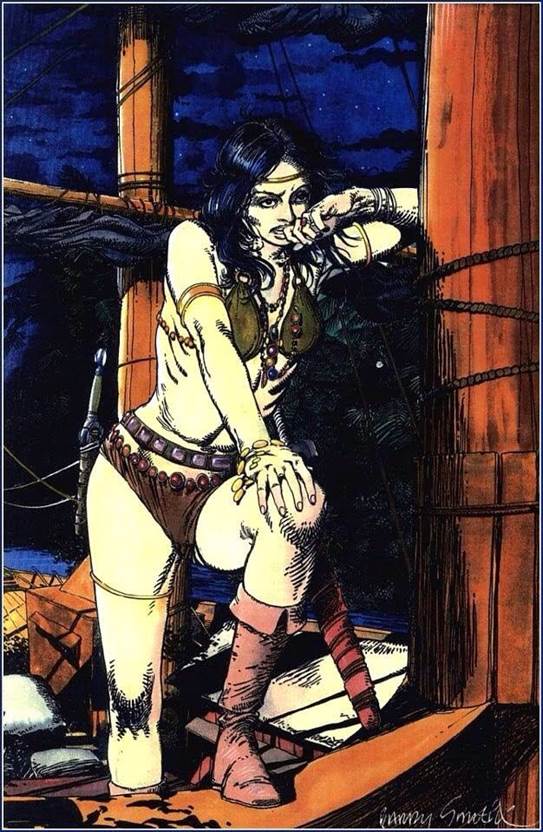 Belit. A character of that name appears in the book under discussion. BWS’s version seems to be pondering. A woman’s thoughts are not a man’s, and that informs the following discussion .

As I said in Pictorial 15, Melissa Scott’sThe Kindly Ones seems to have a lot in common with Starstruck (by Elaine Lee from her stage-play and MW Kaluta art). She has a whole half-page exposition on how a powerful, matriarchal family establishes a planetary corporation

Sirs, I am a Conglomerate Mediator by training, employed by the Halex Kinship.. By a mediator’s standard contract, I am an employee of the Kinship – the Kinship considered as a corporate entity – and am bound by that contract to consider the Kinship’s best interest at all times. (page 287)

As many may know, Starstruck features the rivalry of two powerful families. One, the Medeas, are matriarchal under the banner of founder Molly. The other, the Bajars, are patriarchal and a lot of the plot revolves round the mad son and his infatuation with a cyber-doll. This doll was planted by the Medeas as part of an ongoing galactic corporate war.

Against all the fantastical intrigue you have the inscrutable face of the Universal Church. Religion is one thing that doesn’t feature in The Kindly Ones, but Scott has this repeated line that,

.. neither law nor justice was everything, and sometimes keeping worlds intact was more important than either. (page 279)

This is easier to put into practice in a kinship society, where there have been intermarriages in the past, and grievances have built-up against one clan – in this case the Brandr. Towards the end of the book, the aggrievedHalex clan, under boy heir Alsted, forge sufficient alliances to launch a raid on the second city of Orestes, from sister moon Electra (of the planet Agamemnon, natch!)

The way they did this is an eye-opener to me. At the “Ship’s Council” to decide the Brandr versus Halex case, the voting goes against Halex as the Brandr ambassador issues veiled threats to other Family representatives and allies. It’s looking bad, and then an advisor to Signe, heir of Electra, says

“I protest all today’s decisions.”

“On what grounds?” Shemer demanded.

“Undue influence and wrongful action,” Galar shot back. Unbelievably, he was grinning – nerves, I thought, as much as anything, but then I saw that Signe was smiling too. (page 294)

I suddenly realized what she was doing. The Ship’s Council is the Supreme Court of the Orestean system (comprising all the Families and their retainers). There is no higher authority on the moons, and yet all it takes to override it is for one rebellious voice to say “no”. It struck me this has to be because the law is order, but it is not freedom. A recurrent theme running through her books is,

Neither law nor justice was everything..

There has to be a human safeguard in any free society that allows you to say, “no”. In the case of America it would be an individual state. Take the case of gun law (I happen to have read a whole book on this so count myself an authority-by-proxy!) The Supreme Court is supposed to defend freedom – in this case the 2nd amendment – to bear arms. However, throughout the 19th century individual states interpreted the amendment in different ways; it could be the right to wear concealed weapons, or to wear them openly, according to which state.

The law was interpreting a freedom, setting limits to the freedom in the laws of the states. What the NRA says now is that the freedom to bear guns is guaranteed by the constitution, and must be upheld by the Supreme Court. But, historically, the law has set limits to that freedom because that’s what a law does. Law is order, not freedom.

What the NRA really means is that there is now a legal order that requires people to bear arms (in order to be safe). But that is not freedom, it’s order. To have freedom, the law must interpret the freedom with a rule – such as concealed weapons. What seems to have happened (Pictorial 15) is that the NRA equate freedom with order: they see hi-tech rifles as freedom when actually the technology is simply order (hi-tech geometry).

The NRA already have a cy behaviour that thinks in a geometrical way. Their “freedom” is now pure order. That is why one must have a right to say “no” to any legal authority..

I replied that since he was a friend of mine, I could not betray him. Then the court waxed wroth, and the judge talked a great deal about my duty to the state, and society, and other things I did not understand, and bade me tell where my friend had flown. By this time I was becoming wrathful myself, for I had explained my position.

"But I choked my ire and held my peace, and the judge squalled that I had shown contempt for the court, and that I should be hurled into a dungeon to rot until I betrayed my friend. So then, seeing they were all mad, I drew my sword and cleft the judge's skull; then I cut my way out of the court, and seeing the high constable's stallion tied near by, I rode for the wharfs, where I thought to find a ship bound for foreign ports."  (Queen of the Black Coast)

.. the “natural man” or the barbarian pushing back against Roman Law. The introspective adventurer of Weird Tales, the outward-bound pilgrim of Howard’s historical tales and his barbarians treading the lands with sandalled feet. The Nazarene. That is freedom and there seems to be a “flip” from a world of freedom of the individual to one of pure order that legislates for a parallel reality of hi-tech geometry. That world is cy.

There seems to be total confusion in the corridors of power, so that’s coming-up next.